Skibbereen's Fintan McCarthy and Paul O’Donovan celebrate winning gold in the lightweight men's double A final at the Olympics in Tokyo.

After a wait of 587 days, the band was back together and the end result was the same: gold.

The Skibbereen men had come through an intensive Rowing Ireland trialling process – Gary O’Donovan was also involved – and now sat in the two seats of the Irish lightweight men’s double that was bound for the Olympics later in the summer. While Fintan competed, and won a bronze medal, in the lightweight single sculls at the 2020 Europeans, Paul sat out the international year – but he was back with a bang in Varese.

‘It was Paul’s first competition since the 2019 Worlds so we wanted to go and get a marker for the season. We wanted to solidify the line up and get a gauge of how the other crews were doing. The Norwegians rowed heavyweight at the Europeans so we didn't get to row against them, but we did race the Germans and the Italians, so we got to see how close or far away we were,’ Fintan explains.

Fintan and Paul won their heat, semi-final and then they took gold in the A final, finishing almost two seconds ahead of Germany, with Italy in third. The Irish double didn’t look rusty as they put in a trademark surge in the final 500 metres to get their hands on the first gold medals of what was going to be an incredible season.

‘We hadn't spent that much time together in the boat at that stage so it was a good confidence boost because we knew we would have a lot more time to work on things and make it better. We were able to look at where we could improve,’ Fintan says.

‘We were in great shape because we were after a really hard winter of training to get in the boat. After the Europeans it was about getting the boat together a bit more.’

The Rowing Ireland team, including Fintan and Paul, stayed on in Varese for a training camp in between the Europeans and their next target: Rowing World Cup II in Lucerne in mid-May. Before the camp, they said goodbye to the boat they won European gold in, as it was shipped to Tokyo for the Games. The Empacher sent to the Olympics is the newer of their two boats. Now the two men in the boat needed to get to the Games in their best shape, too. 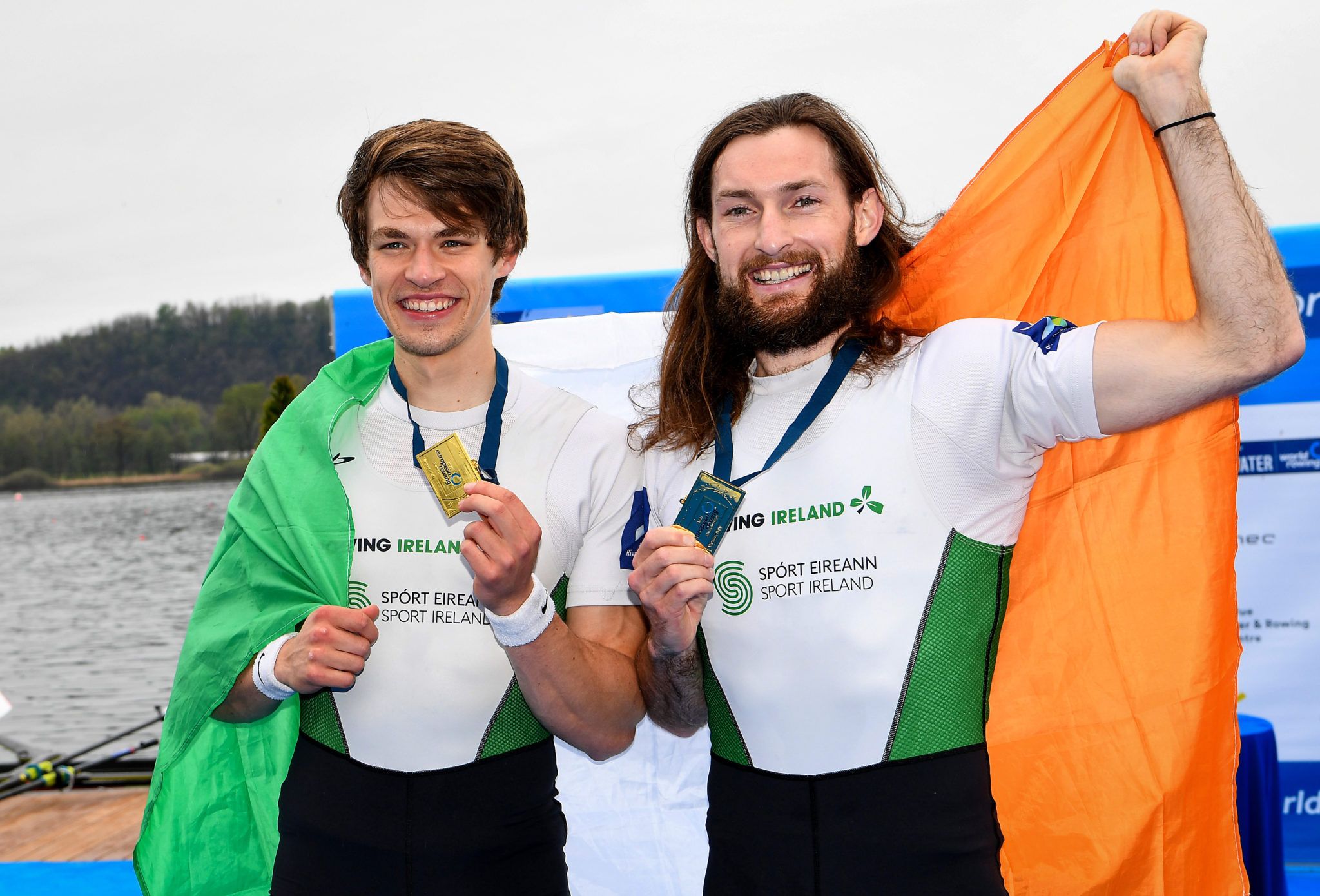 The six-week training camp in Varese, ahead of World Cup II in Lucerne, was energy-sapping on and off the water. It was a heavy block of training. Nothing new there. What was different was the heat training as they began their acclimatisation process ahead of the hot and humid conditions expected in Tokyo.

‘We were on the bike in the bathroom with heaters on and the shower on, just to recreate that humidity and heat. That was three times a week, on top of rowing,’ Fintan explains. The duo emerged the other side of the camp in great shape – and at World Cup II they fired off another warning to their rivals.

‘We knew that at the World Cup we would be able to race the Norwegians and the Belgians who we hadn’t raced yet, and they are two very good crews. For us, it was about ticking stuff off the list, to make sure we had done everything and beaten everyone. The only crews we hadn’t raced by the time we got to the Olympics were Canada and Uruguay,’ Fintan says.

Physically and psychologically, Fintan and Paul were dominating the field. Similar to the Europeans, they won their heat and semi-final. In fact, they won every international race together all through 2021, from heats through to A finals. Again, they were devastatingly dominant. In the A final, the Irish boat won by clear water, having picked off their rivals one by one, their time of 6:15.48 nearly three seconds ahead of Norway in second. The Skibb men already looked unbeatable. They felt good, too, because they saw the signs that suggested there was more to come. 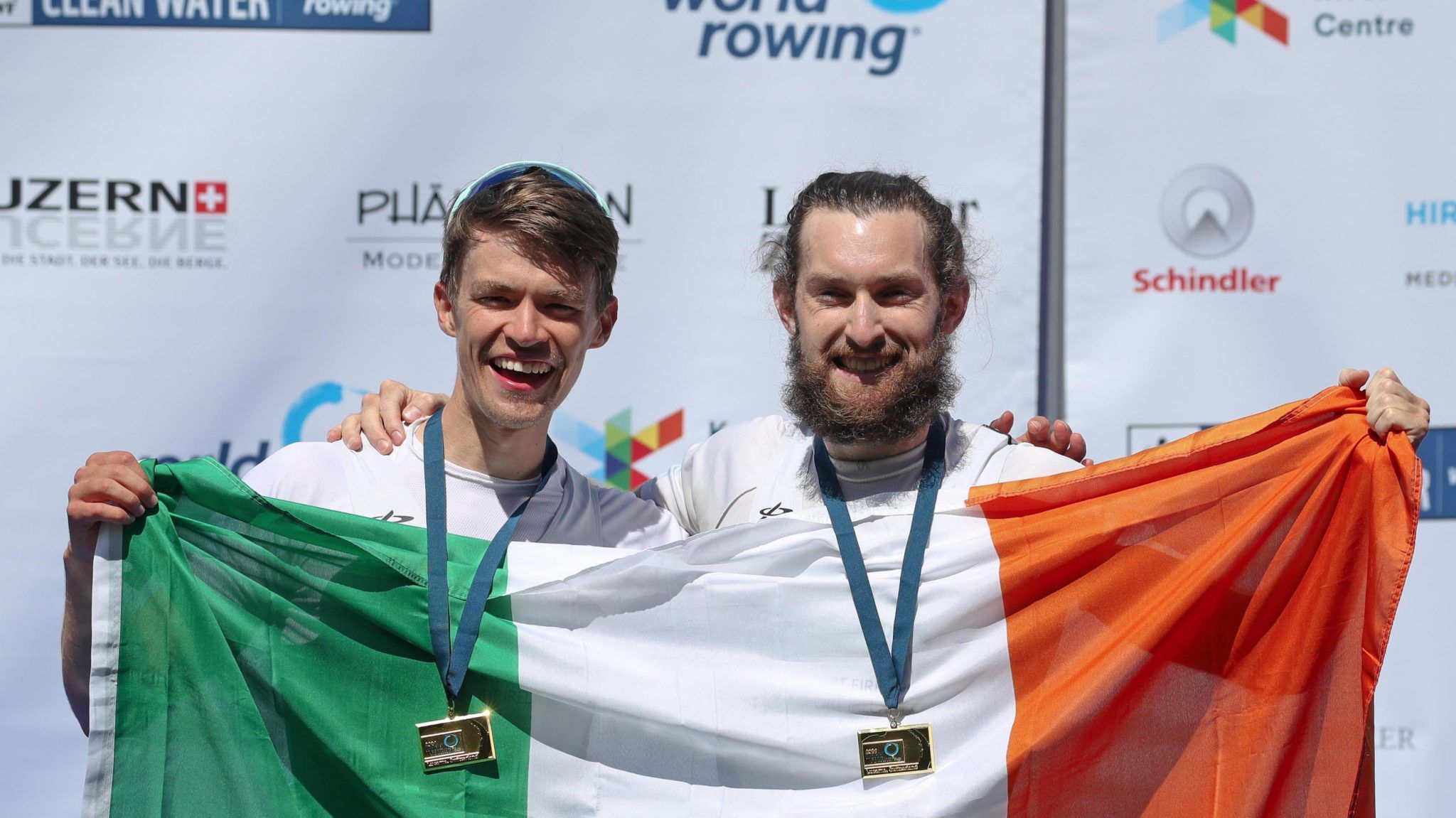 ‘That was a big win in Lucerne. We were clear water ahead of the rest of the field in the final; that was another big confidence boost,’ Fintan recalls.

‘We knew we were doing really well and we knew that if we had another four or five weeks of hard training then things should be good. Once the training is done, there is nothing more you can do. If we train as hard as we can and the best that we can, then we are putting ourselves in the best position to do well. If someone else has done the same and does better than us, then they are just better.’

After a long stint away, Fintan and Paul then travelled back home to West Cork for the next three weeks before flying out in June to a pre-Olympic training camp in Banyoles in northeastern Catalonia in Spain. The Games were moving closer but there was still work to be done.

If Fintan could use one word to describe the Banyoles training camp, it would be ‘brutal’. If he was allowed two words, he’d expand it to say ‘really brutal’.

‘To be honest, it’s nearly about surviving the first few weeks. We ramped up the intensity for a few days to make sure we got to practice at race pace. We went into the sauna after sessions to keep up the heat training,’ he says, as they ticked off the days to Tokyo.

The pre-Olympic favourites – heavily tipped to land a medal, particularly gold, given their form – landed in their holding camp in Fukuroi, less than four hours from Tokyo, in top form. While this was Paul’s second Olympics, it was Fintan’s first, but he didn’t feel nervous, especially as he knew he was in the best shape of his life. ‘We were on land and on rowing machines in the holding camp and I was pulling some really good scores for me in those sessions so I knew that physically I was in top form,’ he said.

Fintan and Paul both felt that if they produced their best at the Games then they had a good chance of winning and doing well; that’s what they focussed on rather than saying they were favourites to win. It’s an approach that worked.

On Thursday, July 24th, at the Sea Forest Waterway course in Tokyo, the Irish double got their gold bid off to the ideal start. They won their heat comfortably, almost five seconds ahead of the Czech Republic in second place. Four days later, on Sunday, they dominated their semi-final to power into the Olympic A final. They also recorded a world's best time of 6:05.33. The pressure of Olympic favourites was resting easy on their broad shoulders. They weren’t fazed by the growing attention. They had unbreakable confidence in the hard graft they had put in.

‘We stuck with the tried and trusted approach. It sounds weird to some people but we don’t really have big debriefs or pep talks, it is really just a matter of doing the race. In the end the Olympic final turned out like a lot of the other races,’ Fintan says.

On Thursday morning, July 29th, under the unrelenting Tokyo sun, Fintan and Paul achieved what no other Irish rowers had ever done: they won an Olympic gold medal. Rowing from lane three, it really was the magic number as Fintan and Paul, pushed all the way by Germany, powered to glory. It was a magical moment. Truly incredible. The best lightweight double in the world were crowned Olympic champions.

‘The Germans gave us a run for our money but we expected that because they were performing well through the rounds. Other than that, it was business as usual. The Italians went off fast, the Germans went off fast, we made up some ground in the middle and put in a big sprint. We didn’t win by the same margin as we did in Lucerne, but it was a bit similar,’ Fintan says, before digging a bit deeper into their style. 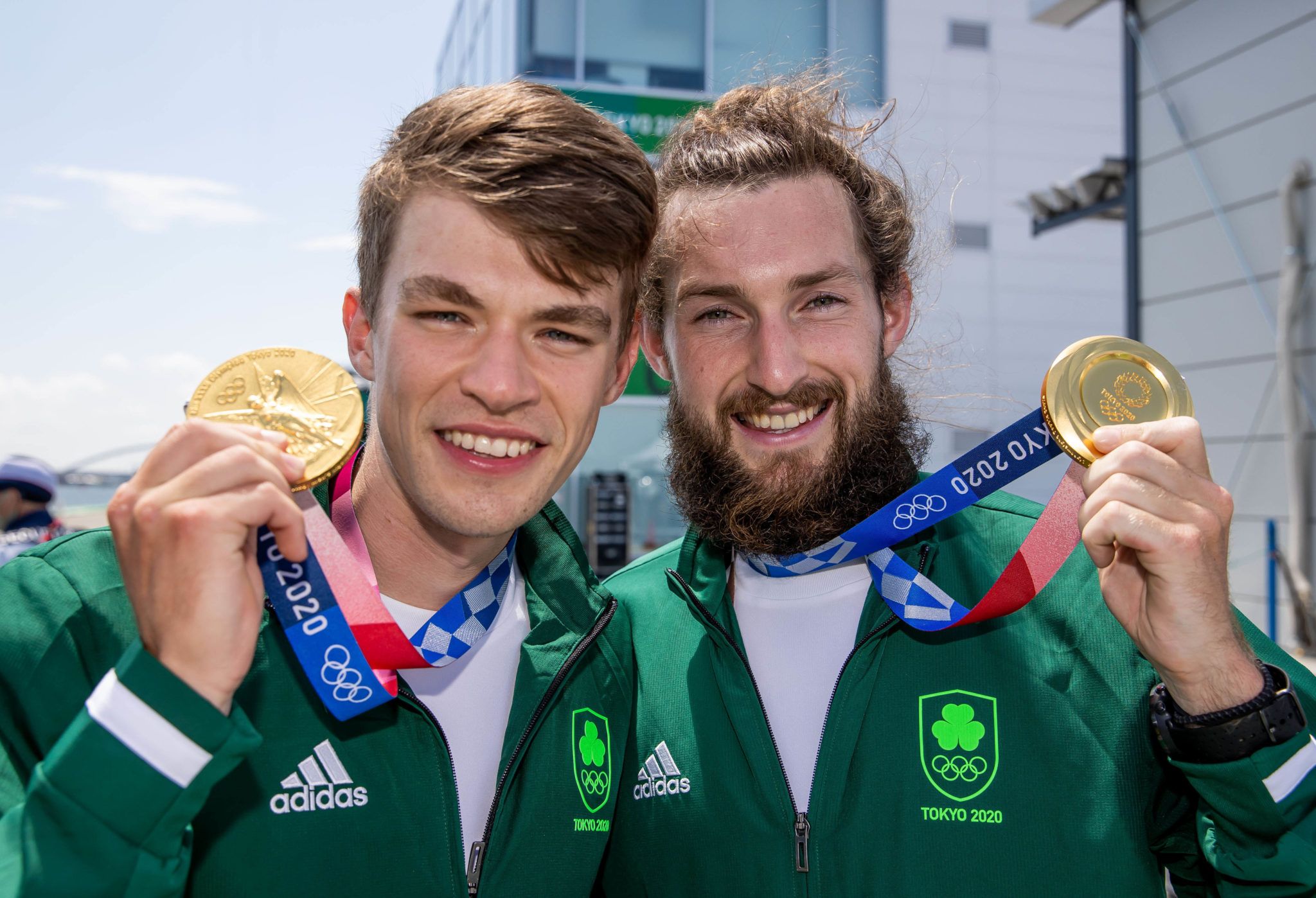 Fintan and Paul with their Olympic gold medals.

‘In any other race I could have been thinking that we could have done something better, but I haven't thought about it since. We got the job done. If we want to, we could look at it and analyse it. It was a bit rough and ready, but we won. Everyone seems to think that we could be better at the technique but at the end of the day we crossed the line first, and that’s what sticks out to me.

‘It’s a case of there are 100 different ways to do it and you have to find what works for you. It might not look the same as everyone else or like what has gone before, but it works for us. It’s not bad, it’s just different.

‘Paul is very good at trying different things and seeing what works. For me I am usually one who sticks to my guns and I don’t like changing that much but I have learned from Paul that it is good to try out different things to see what works and what doesn’t. If something doesn't work, it’s not the end of the world.’

It definitely worked for Fintan and Paul in 2021, as they racked up gold after gold, with the Olympic medal their crowning glory. It means they are currently Olympic, World and European champions. With the serious business over, it was time to wind down and have some fun.

No Irish crew had ever won the double sculls Challenge Cup at Henley Royal Regatta – but Fintan and Paul changed all of that in mid-August, just two weeks after their Olympic heroics.

‘That was the icing on the cake. I had never been to Henley before and it was so much fun. We love racing and going to these events. We were in great shape coming off the Olympics and it worked out well for us. It was more a case of having fun than anything else,’ says Fintan, but once the Skibb men got on the water, there was no stopping them. Not only did they win, but the Irish lightweights were chopping down heavyweights, including in the final, which they won with room to spare. No crew could live with their higher stroke rate. Another gold was added to the collection to cap the perfect season.

But they’re not finished yet. Paul is 27. Fintan is 25. The Paris Olympics are in 2024. There’s even more to come. The best in the world are determined to get even better.