Emily Hegarty (left) and Aifric Keogh in action at the 2018 World Rowing Championships where they finished sixth overall.

The Olympic Games have been pushed back until the summer of 2021 but for Skibbereen rower Emily Hegarty the goal remains the same. Kieran McCarthy caught up with the UCC student to chart her rise from home in Skibb to chasing down a place at the Tokyo Olympics

EMILY Hegarty can pinpoint the moment when she realised she is good enough to take on the best rowers in the world.

It was just before noon on Thursday, September 13th, 2018. Emily and Aifric Keogh had won their A/B semi-final of the women’s pair at that year’s World Rowing Championships in Plovdiv, Bulgaria.

That morning had started out overcast before the sun broke through.

It was also a breakthrough moment for the Skibbereen rower from a farm in Moonagh in Lisheen, that Parish of Rowers.

By winning their semi-final and qualifying for the A final of the women’s pair, Emily and Aifric made history. They were the first Irish women’s rowers to achieve this feat. The pair finished sixth in the A final.

While results elsewhere, like Gary and Paul O’Donovan’s gold in the men’s lightweight double, overshadowed the women’s pair’s progress, finishing sixth in the world was a significant achievement.

‘It reassured me that this is what I want to do,’ Emily explains.

‘There were question marks, especially given it was my first senior world championships and I had just turned 20 at the time, so finishing sixth was a boost.

‘It showed me that we can be competitive because we weren’t expected to do that well there.’

The fire was burning in Emily when she landed home from Bulgaria.

Skibbereen Rowing Club is packed with athletes who admit they weren’t good at other sports, but who then found their calling on the Ilen River.

Emily is part of that gang.

‘I was fairly useless at every other sport I tried,’ she says.

‘I couldn’t catch a ball or throw a ball or kick a ball, so I tried something new.

‘My older sister rowed a small bit but had quit by the time I joined the club.’

Emily was 11 years old and took to it naturally. What helped is that there was a big group of girls around the same age all there at the same time.

‘The first few years were good fun. There were 10 or 15 of us when I started. We were quite competitive too.’

As the years rolled by, some dropped off, but Emily stayed on. Success came at the Irish Rowing Championships. Between 2013 and 2016 she won ten national titles, bookended by successes in the novice single scull in 2013 and the junior single scull in 2016, the latter her final year as a junior. In between she won in boats alongside Aoife Casey, Niamh Casey, Bernadette Walsh, Ellen McCarthy, Louise O’Sullivan, Lydia Heaphy and Aoibhinn Keating.

The women’s pool of talent was strong in Skibbereen so it didn’t surprise anyone to see several of this group progress to the international set-up.

Emily went to the Coupe de la Jeunesse in 2014 in a quad, and the following year in a double with club-mate Aoife Casey – and they won silver in Budapest on Emily’s 17th birthday.

The junior world championships in Rotterdam followed in 2016, just weeks after Gary and Paul O’Donovan’s Olympic silver medal success at the Rio Games.

There was more silver for Emily last year – and that led to more chatter about possible Olympic qualification. 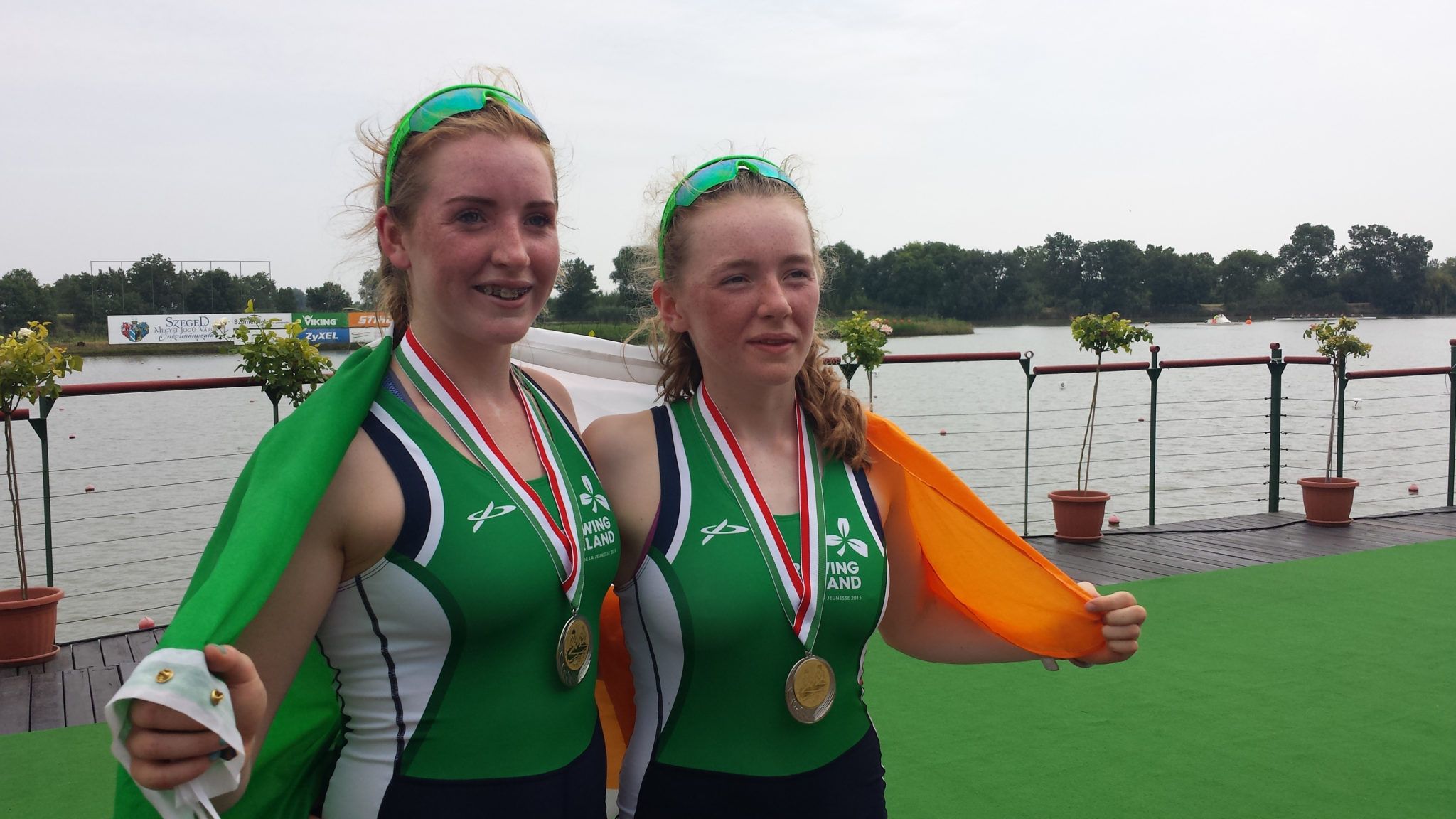 In the heat and humidity of Florida, the U23 crew of Emily, Claire Feerick, Tara Hanlon and Eimear Lambe won silver, finishing behind Great Britain in the final.

‘After we had won the medal and we were de-rigging the boat to put it back on the trailer, Antonio (Maurogiovanni, Rowing Ireland’s High Performance Director) was like, “let’s go for Olympic qualification”.’

It was on to Linz. The talk was now about the 2020 Olympics in Tokyo.

‘That had been a goal since 2018. We did want a women’s pair or a four, or ideally both, to qualify. We have a strong group and there is no reason why there wouldn’t be a fast pair and a fast four.’

There was one change in the line-up from the U23s with the experienced Aifric Keogh taking a seat in place of Claire Feerick. At the senior worlds they earned a spot in the B final where the top two would qualify for the Olympics. The Irish boat finished fourth on a windy course.

‘It was massively disappointing initially because we had such a really good regatta up until that race,’ Emily recalls.

‘From that moment our next job was to qualify the four for the Olympics.’

At the 2019 worlds, Aileen Crowley and Monika Dukarska qualified the women’s pair. Rowing Ireland also want the women’s four to take part in the next Olympics.

‘There is no set seat in either. The pair have already qualified but there is nothing stopping them putting out a new line-up. Over a winter, speeds can change so much so it could have been a different pairing in the pair,’ the Skibb rower explains.

The Irish heavyweight women’s group is strong. Emily (21) and Natalie Long (19) fly the Skibbereen flag. Sanita Puspure has already qualified the single for the Olympics. Also in the mix for the pair and the four are Aifric Keogh, Fiona Murtagh, Eimear Lambe, Aileen Crowley, Tara Hanlon and Claire Feerick.

There’s enough talent there to qualify the women’s four alongside the pair. Over the winter, everything was gearing towards the final Olympic qualification regatta in May, the last chance to earn a ticket to Tokyo.

‘There is definitely a competitive atmosphere and that drives you on too,’ Emily says.

‘When you are sitting next to someone on the rowing machine, you are trying to get the better of them, constantly side-eyeing their numbers and trying to pip them.

‘We had four or five pairs out on the water during the winter and it was a matter of making your boat move the fastest.’

Everything was moving well. But then everything changed.

Emily and the Irish heavyweight group were on a three-week training camp in Gavirate in northern Italy in February when the Covid-19 outbreak was escalating.

They were trialling for the 2020 international season. The World Cup regattas, the Olympic qualification regatta and the Olympics were all targets.

But then everything changed.

‘It was getting serious in Italy at the time,’ explains Emily, with Gavirate an hour north of Milan.

‘When we got to the airport in Milan to fly home, everyone was wearing face masks. It got quite scary quite fast. The week after we came back, the number of cases escalated in Italy.

‘The first two World Cups were meant to be in Italy and we expected them to be cancelled. It was a waiting game with the rest of the events, but we had to keep training as if everything was as normal.’

Next the final Olympic qualification regatta was cancelled and then this summer’s Olympics were postponed until July 2021 – the big target was moved, but the goal stays the same.

The extra year of training also means this group will be stronger when the Olympics roll around next year and they will be in a better place to qualify the four.

‘The majority of us are quite young so it’s promising for the future. This gives us a year to develop crews and it’s another year to get stronger, fitter and faster,’ Emily says.

‘It’s disappointing the Olympics have been pushed back as a lot of us had plans for after the summer – maybe take a year out, get a job and I was going to go back to college full time, whereas now that will be pushed back.’

Emily is a third-year Biological Sciences student at UCC. She has split third year over two years so she can juggle full-time training and college work. Now the plan is to push back fourth year by an extra year.

‘This might be the only opportunity I get to compete at an Olympics, so I need to make the most of it,’ she says.

‘It’s only another 12 months so I may as well give it everything. I might never get this chance again. Who knows what will happen in the future.’

The immediate future is training at home to keep her fitness levels up during the ongoing lockdown. That will keep her tipping by until she gets back on the water and turns up the dial again when attention hones back in on the Olympics and the possibilities it brings.

If everything goes according to plan, Emily could be Skibbereen Rowing Club’s first female Olympian.