Emily Hegarty celebrates winning a bronze medal at the Olympic Games in Tokyo.

YOU can’t beat a mother’s intuition. Mary Hegarty is, by her own admission, a nervous fan when she watches her youngest daughter, Emily, in action.

The hours leading up to last Wednesday’s women’s four A final at the Olympic Games in Tokyo were particularly stressful. So tense.

‘It was such a big race and there was so much riding on it,’ Mary reasons – and there was, the biggest race of Emily’s life.

It was an Olympic final against the best crews in the world and they don’t get much bigger than that.

Emily’s dad, Jerry, is usually much more calm, but the nerves were getting to him, too.

But as the drama unfolded on the Sea Forest Waterway in Tokyo Bay, back home in the Hegarty house in Mohonagh in Aughadown, just outside Skibbereen, there was a moment when Mary felt Emily and Co would win a medal.

‘They have a good finish and I knew they would get a medal then.’

Mother’s instinct hit the nail on the head, again, as Emily and the Irish women’s four crew including Fiona Murtagh, Eimear Lambe and Aifric Keogh raced their way into the history books with a brilliant bronze medal, finishing behind Australia and The Netherlands. 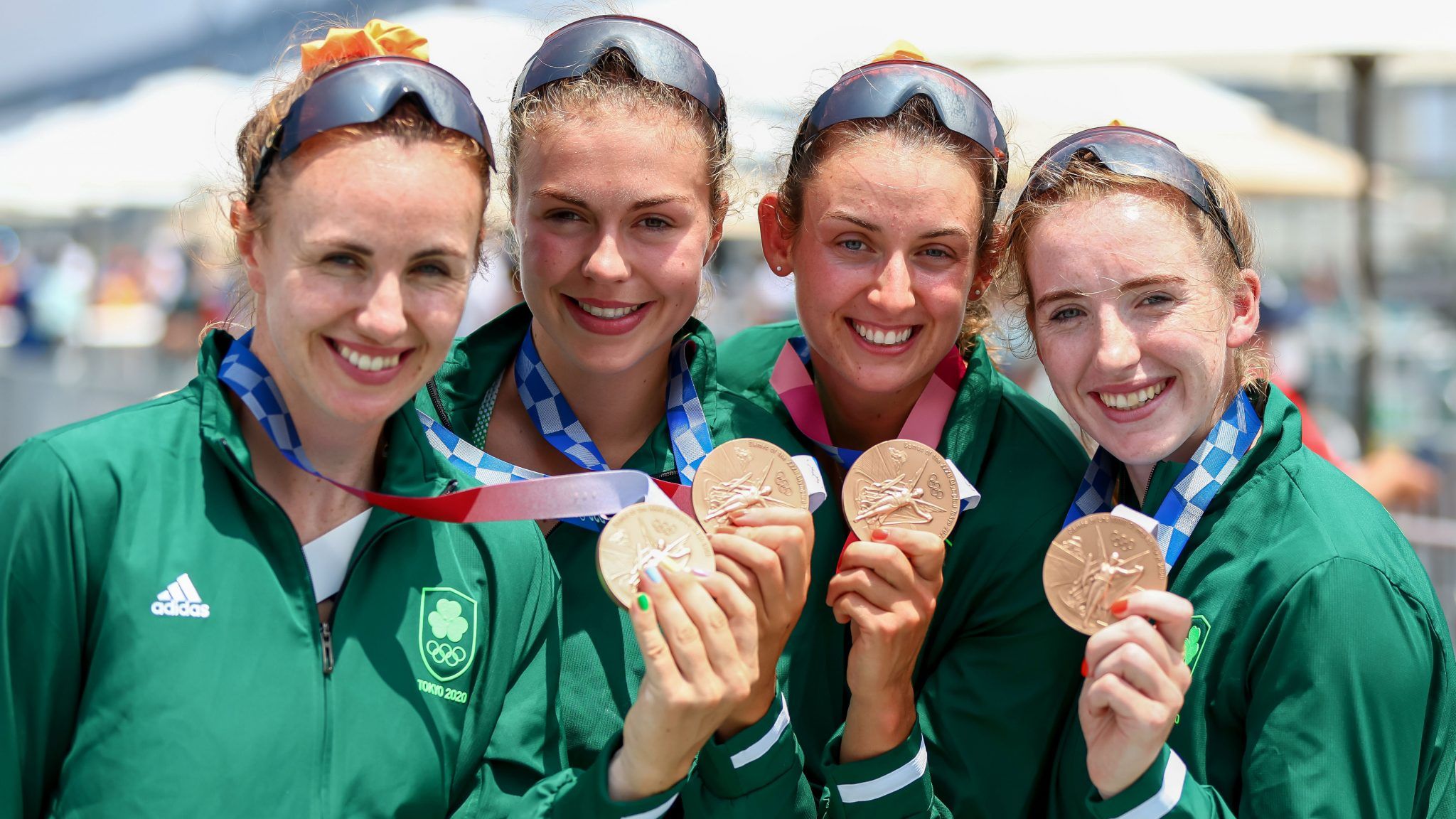 This incredible quartet has made history and they will also inspire a generation of young girls across the country because they have shown what is possible.

The 2016 Olympic silver medal won by Gary and Paul O’Donovan is the moment that transformed Irish rowing. There’s agreement on that. Those two Lisheen men came along and won the country’s first-ever Olympic rowing medal and that broke the glass ceiling and showed that Irish rowers can win the big prizes. Psychologically, a barrier was smashed and a door was opened.

Now, five years on, four trailblazers in the Irish women’s four have become heroes to girls across the country.

‘Now girls have someone to look at and see that this is possible,’ Eimear Lambe says. ‘There wouldn’t be as much Irish women’s rowers on the news or in the media, but now we have four strong girls here. If we can do it, you can do it.’

When Emily Hegarty (22) was younger and making waves at Skibbereen Rowing Club, she looked up to Sanita Puspure who was and is still leading the charge for Irish women’s rowing. Emily didn’t think she’d ever get anywhere near Sanita, but as pages on the calendar turned, year after year, a dream became more of an attainable goal.

There are important moments dotted along in Emily’s journey that reassured her she was on the right path – and all of those led to Tokyo on Wednesday morning when the Skibb rower played her role in an historic moment for Irish sport: a women’s crew on an Olympic podium with medals to show.

‘This is really exciting for girls new to the sport, for girls coming up and for girls who want to commit, to know that there is a good group already here and that it’s really cool to be part of this. This is the beginning of it, really, and I think there will be a lot more to come,’ Emily says. That’s exciting. Rather than this being viewed as the destination after this quartet’s journey to an Olympic bronze medal, this is just the start. They’re here to take over. We had the Gary and Paul Effect post-2016. Now we will have the Irish Women’s Four Effect, too. That will be felt at home in Skibbereen Rowing Club as well.

‘To be honest, when I was growing up it’s something I was a bit nervous about,’ Emily told the Star before flying out to Tokyo for the Games.

‘When I was younger Skibbereen was predominantly lightweight and not a huge amount of heavyweight rowers came out of the club.

‘I’m glad now that there won’t be any need for girls to be nervous about going for heavyweight.

‘I wouldn’t be an exceptionally huge person at all. I am the shortest person in our boat. But I would like to think that this would encourage young girls coming up that not being a lightweight isn’t a bad thing.’

Now Skibb rowers can see, lightweight or heavyweight, there is a path from the River Ilen to the biggest prizes in rowing. Outside of the sport, the emergence of Emily, Aoife Casey and Lydia Heaphy on the rowing side, all selected for the Olympics, and of course, Ireland’s fastest woman Phil Healy who will be in action in Tokyo from Friday onwards highlights the magnificent role models that young girls have here in West Cork. Add in GAA players like Melissa Duggan, Martina O’Brien, Orla Cronin, Libby Coppinger and Orla Finn. Rugby internationals Enya Breen and Laura Sheehan. Former world kickboxing champion Lily de le Cour. And there are many more, and you can see West Cork is blessed with talented sportswomen who are all ideal role models, too. And now we have a West Cork woman with an Olympic medal. Take a bow, Emily Hegarty.