As the country emerges from what has felt like a never-ending lockdown and amateur sport is finally given the green light to return, spare a thought for the local sports clubs that haven’t weathered the Covid storm.

There has rightly been positivity around the return of GAA, rugby and soccer, but what of the minority indoor sports that hold just as important a place in the lives of their participants as the local football clubs do in theirs?

The Ilen River Boxing Club in Skibbereen, of which I am a member, won’t be opening its doors anytime soon.

The gym the club is based out of, COR Fitness, has closed indefinitely after owner Colm O’Regan decided not to renew the lease on his Market Street premises.

O’Regan, who also founded this iteration of the boxing club, along with acting as its Head Coach, made the decision not to renew the gym's insurance after his experience with reopening following the first lockdown.

‘It’s too uncertain for me,’ O’Regan told The Southern Star this week.

‘It’s an unknown. To open we’d need to get insurance for the full year and I was only open for four months last year. The last kids boxing class we had was at the end of February 2020.’

Millions of people worldwide have suffered in a variety of ways because of the Covid pandemic, but that doesn’t make the loss of the Ilen River Boxing Club to Skibbereen any less significant.

‘It was a unique place,’ Colm said.

Anyone who has ever darkened the doors of the club will tell you about the brilliant community atmosphere fostered by Colm and the fantastically diverse cast of characters that trained there.

The club’s membership included butchers, bakers and even sushi-makers.

There were Polish, Lithuanians, Slovakians and a solitary Donegal man.

You’d be just as likely to see someone using their Irish Dancing as a warm-up on a Wednesday evening as you would someone jumping rope or hitting the heavy bag.

From five-year-olds joining their first sports club, to ex-intercounty footballers and everyone in between, Ilen River Boxing Club was a credit to Skibbereen.

Anyone who knows anything about boxing, or any combat sport for that matter, will know that for those involved, the club often becomes like a second home with the members acting as a surrogate family.

Children who might be struggling with self-confidence issues or bullying at school often find a safe space where they can tackle their issues without judgement.

If you’re an outcast in the real world you’ll likely fit right in at a boxing club.

‘It gave kids an outlet. Friendships for life were built,’ Colm said. 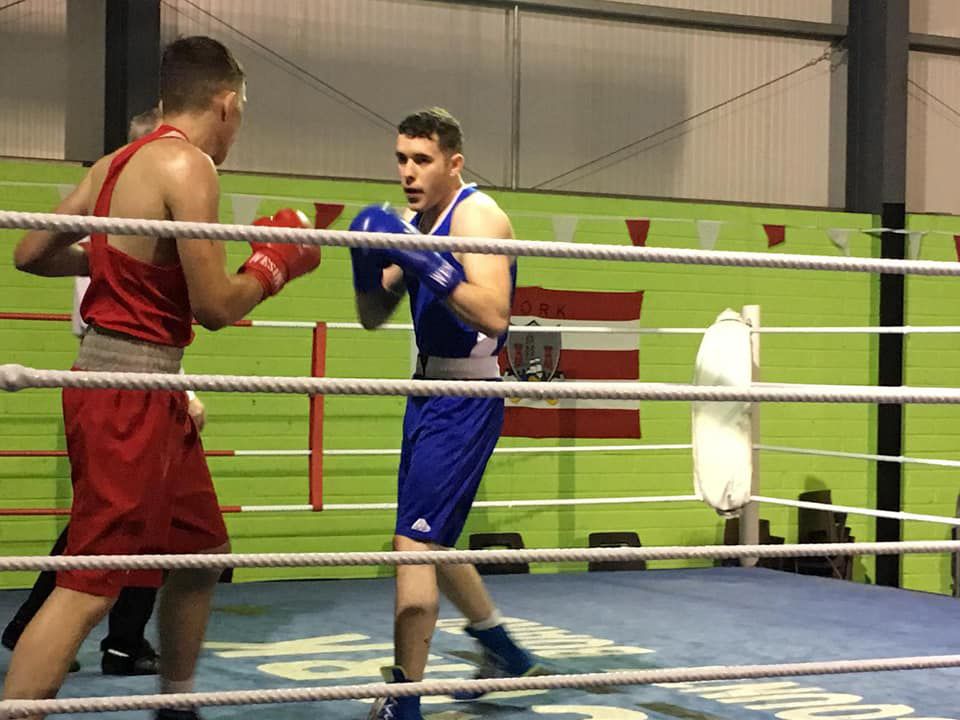 Colm O'Regan (blue) in action at the Cork County Leagues

The club probably enjoyed its highest high in the weeks before the pandemic took hold.

A night of charity exhibitions in aid of the West Cork Down Syndrome Support Group gave novice boxers their first taste of in-ring action in front of a packed house.

The atmosphere was electric.

The feeling you get from lacing the gloves up for the first time and competing one-on-one in front of a crowd of mostly strangers is genuinely life-affirming.

Beaming, bloodied smiles filled the gym and reminded everyone why we get involved with amateur sport.

It wasn’t just novices that trained there, though.

Trips to Churchfield in Cork to take on the best the city had to offer were a regular occurrence.

Whether by convoy or in Tom Collins’ mini-bus, boxers from Ilen River travelled up and down the N71 and represented Skibbereen with distinction.

At one point Tom’s son Michael won three fights in five weeks against strong opposition at the Cork County Leagues. The powers that be in Cork boxing were beside themselves.

Though no firm plans are in place for reopening, Colm hasn’t ruled out the possibility somewhere down the line.

‘If things are back to normal in October, I’ll start looking for a new venue. It’s not dead in the dust.’

Thankfully, there is light at the end of the tunnel for some of the other West Cork boxing clubs.

Dunmanway Boxing Club won’t be opening just yet but plans are afoot for later in the year.

‘We’re going to wait until September and hopefully everything will be back to normal then,’ Head Coach Seán Sheehan said.

‘I’m on my own in the club as it is, so the outdoor training just isn’t feasible for us. The majority should have the vaccine by September and we’ll get back in the gym then.’

Bantry is taking a similar stance as Andrew Desmond told us.

‘We have no plans to go back just yet if it’s only outdoor training. We usually go back in August after the summer anyway so that’s the plan. Full steam ahead in August.

‘We don’t see the need to rush back as we have nowhere to facilitate outdoor training and it's difficult with insurance.’

‘We are hoping for good news at the end of the month in relation to going back indoors,’ Kingston said.

‘We are told by our governing body that we can train indoors in limited groups and no contact from June 6th which would be hard but I’m hoping protocols might lighten up a bit before the end of the month.’

Hopefully, for all associated, the Ilen River Boxing Club will be able to answer the bell once more too.