DONAL O’Sullivan was a powerful man, with his words and with his hands.

He is also one of the most influential figures in the history of Ireland’s greatest success stories: Skibbereen Rowing Club.

Donal passed away last month, but his legacy lives on as his giant handprints are all over the rowing club he helped shape, guide and advise. His contribution created the platform for the current generation to flourish on.

For 35 years, Donal was chairman of the club – that’s an incredible reign. He assumed that role in 1973 when the club was in its infancy and held it for decades after.

I’ll never forget the first time we sat down together to chat for Something in the Water, the story of how Skibbereen Rowing Club conquered the world. It was a weekday afternoon in Bushe’s Bar in Baltimore. Sometime in early 2018. By then the book had the green light and it was full steam ahead – but Donal, after eyeing me up and down a few times, then told me he’d decide if the project could proceed. Queue the first of many long pauses, which were a trait of the man.

‘But the book is going ahead, Donal, and I want to tell your story and your role in it,’ I replied, pointing to his influence and importance.

Ten seconds of silence felt like ten minutes, but this was Donal. The long pauses were followed by words of wisdom. He chose his words carefully and delivered them with authority. It was easy to understand why he was club chairman for over three decades. His judgment carried weight. 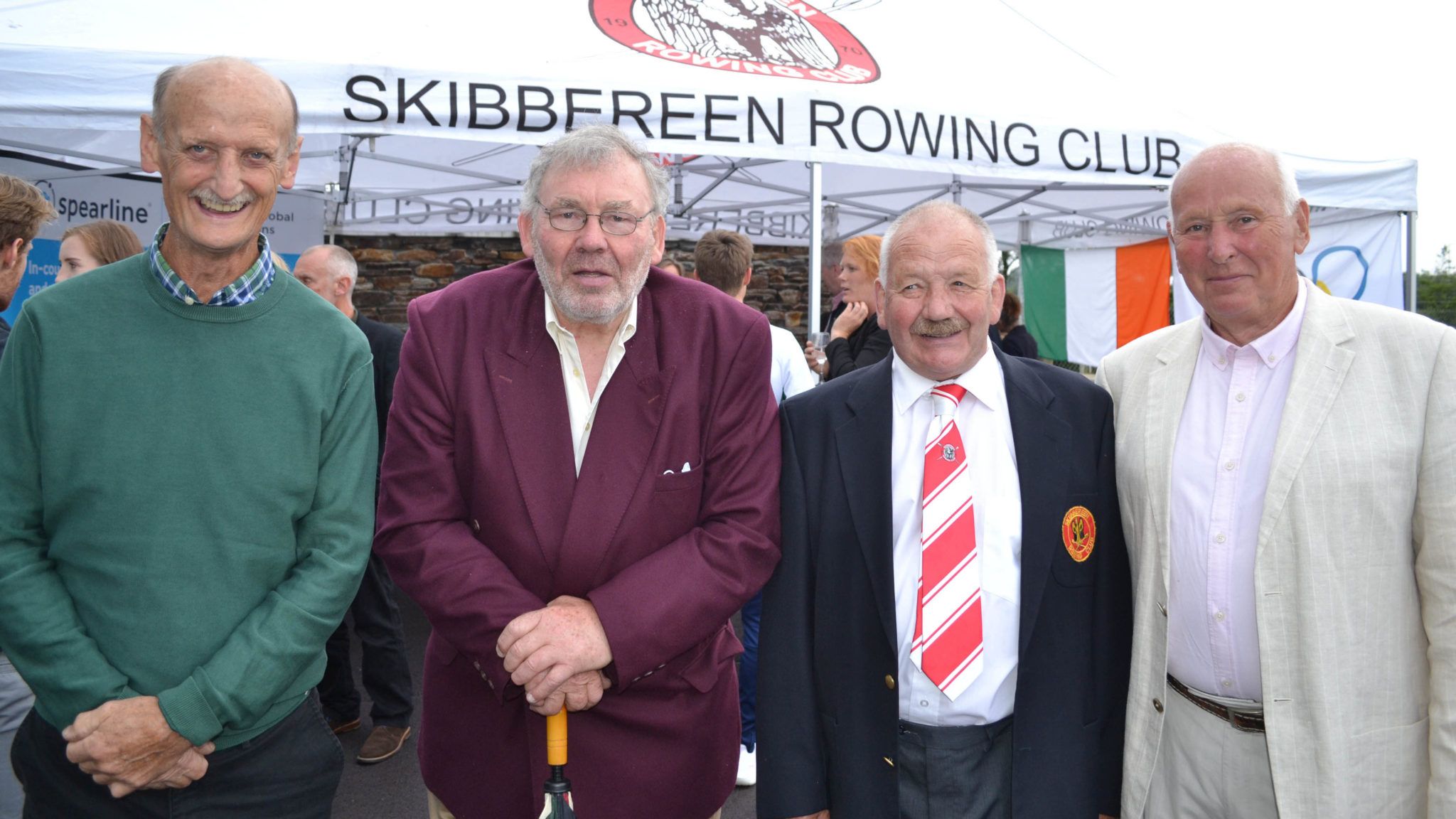 Donal O'Sullivan (second from left) pictured with Richard Roycroft, Richard Hosford and Fintan Lupton at the reception last summer to welcome home the Skibbereen rowers from the Tokyo Olympics.

‘Donal's influence helped to make the club what it is today,’ Skibbereen Rowing Club said in a tribute to their late chairman.

‘Donal was at the helm of Skibbereen Rowing Club through many rough waters when momentous decisions were made and steered a steady course throughout.’

One of the decisions Donal took a lead role in was choosing Drisheen as the club’s home. On New Year’s Day in 1976, he hopped in his car, drove out from Skibbereen town, spotted a field that sloped down to the River Ilen – and he could picture the jigsaw being pieced together in his head. That field is now the HQ of Ireland’s most successful rowing club that also has the full collection of Olympic rowing medals.

Those few hours in his company in Bushe’s Bar offered an insight into a man who helped build the Skibbereen rowing success story. A naturally strong man, wide shoulders, broad chest, booming voice, when Donal talked, you listened, but he also revealed he was ‘naturally shy.’

No-one knows it, he said. The observant would spot it, but he had become adept at hiding it well. What he didn’t hide – or couldn’t – was his love for Skibbereen Rowing Club.

‘Were we pioneers or lunatics in those early days? It’s a thin line,’ he quipped, peering over his glasses, across the table.

Then came the pause.

‘Maybe it was pioneering stuff. Maybe it was foolhardy too, but we did what we had to do.’

It was pioneering and Donal was one of the main drivers through some choppy waters in the early days, and he also got to see Skibbereen rowers win the biggest medals in rowing and bring Olympic gold, silver and bronze to the clubhouse he helped to build and into the meeting room upstairs that he commanded for all those years.

He was there, too, at Skibbereen Rowing Club sponsor Spearline’s offices on North Street in Skibb on a cloudy Monday evening in early August 2021 that was lit up by the sparkle of Olympic gold and bronze medals, as Skibb’s Olympic heroes were welcomed home. He sat near club founder and former president Danny Murphy, the Heir Island legend who passed away late last year. It was a proud moment for two men who helped turn a rural, country rowing club into a force to be reckoned with.