Kerry star David Clifford has the potential to cause the Cork defence nightmares on May 7th.

THE boy prince is primed to become the king of the Kingdom later this summer – but the Rebels have the first opportunity to ambush his march to folklore.

David Clifford is a phenom. We all know that. He’s a football genius. And he also has the Cork defence in his cross hairs ahead of the upcoming Munster Senior Football Championship semi-final on May 7th.

As if Cork football don’t have enough problems right now, with still no solution to the Páirc Uí Rinn or nowhere saga, Kerry forward Clifford is licking his lips at the prospect of running at a county that shipped the most scores (almost 0-20 per game) in the recent national leagues.

Is Clifford the best we have ever seen? Is he the best player to ever don the green and gold? These were questions that came up in conversation recently with a friend of mine from not far beyond the county bounds. I wasn’t overly surprised by his answers. The currency of success in Kerry is All-Ireland senior football championship medals. Until Clifford brings at least one of these south from Croke Park he will not be crowned king. There are comparisons between Clifford and Kerry’s current barren spell – their last All-Ireland SFC title was in 2014 – and a previous drought that spanned from 1986 to ’97, 11 long years for the old enemy. That was the era of another great who was then carrying average Kerry teams on his back season after season. We marvelled at Maurice Fitzgerald's skills and balance – but it wasn’t until 1997 that the St Mary’s clubman garnered his first All-Ireland now affectionately known by Kerry supporters as ‘Fitzy’s All-Ireland’.

It’s now eight years since Kerry won an All-Ireland SFC title under the then-management of Eamonn Fitzmaurice. But they are favourites to win the big prize this season, with one man in particular leading their charge. He is 23 years old, stands at six foot two and weighs in at about 14 stone: the Gaelic football world is David Clifford’s oyster. Having won two All-Ireland minor titles he was considered too valuable to the Kerry senior set-up, in their efforts to stop Dublin’s blue wave, to allow him progress through the natural channel that is U20 football.

He was plucked straight out of minor by former Kerry senior boss Peter Keane; whether this was the correct decision or not filled many newspaper pages at the time. Following five All-Ireland minor crows in a row, Kerry didn’t follow it up with U20 titles. Would Kerry have won further underage titles if Clifford and his partner in crime Sean O’Shea had been left to follow the regular underage path? We will never know. 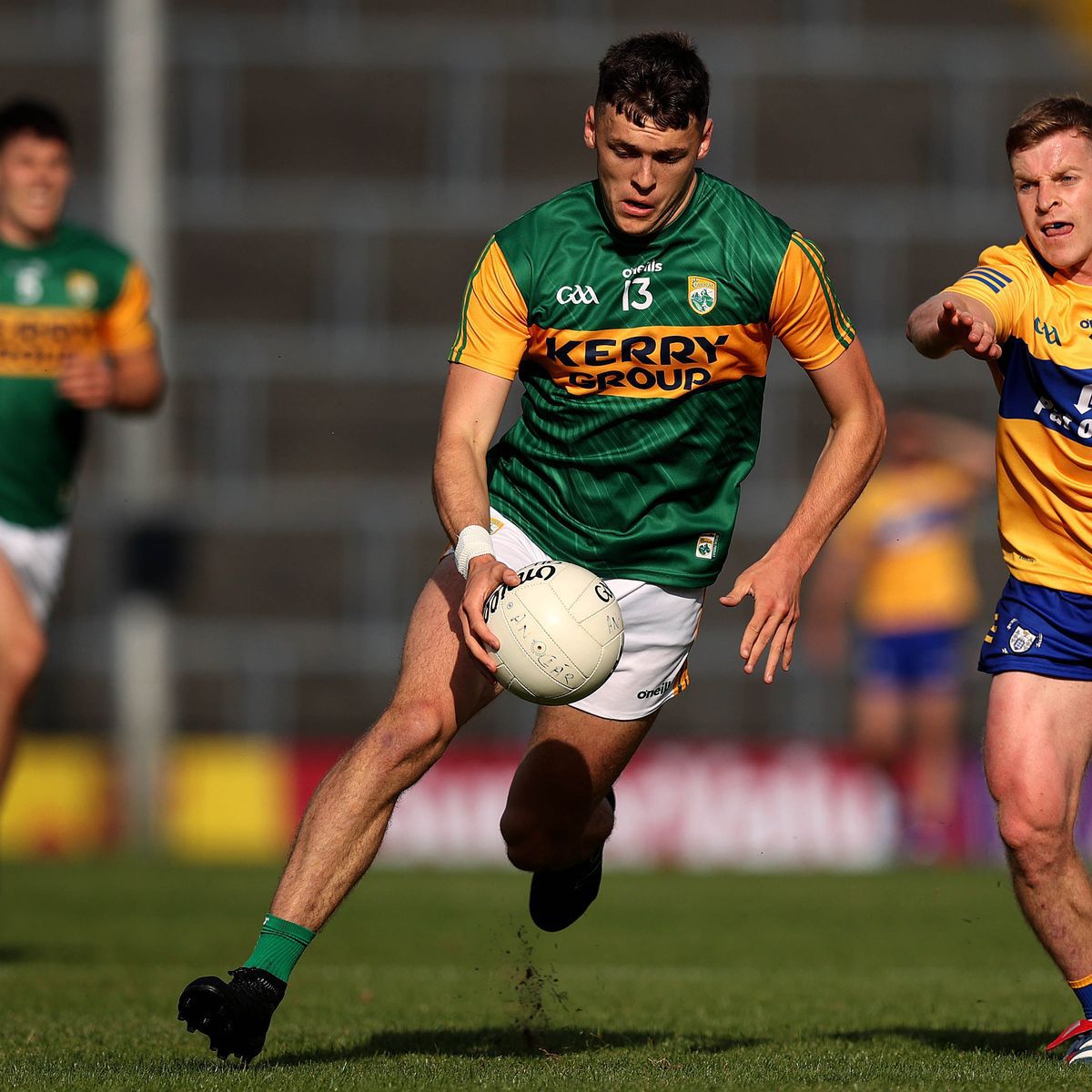 Kerry forward David Clifford has been in free-scoring form for the Kingdom this season.

But what you have now is a young man who has been exposed to five years of intensive strength and conditioning at senior level. A boy in a man's body who is now considered unmarkable one on one. Mayo defender Padraig O’Hora was left isolated to mark Clifford in the recent Division 1 football league final at Croke Park. The end result: Clifford finished with 1-6. Even after their well-publicised tête-à-tête during the game, as O’Hora did all he could to get under Clifford’s skin, the brilliant Kerry man’s answer was 1-2 in the following plays. Devastating.

What’s more, Clifford captained Kerry to win the football league title earlier this month and finished as top scorer in the process with a staggering 5-28, only six of which came from frees. In his speech his maturity and humility was evident with his tribute to the recently deceased Red Óg Murphy.

Clifford ticks all the boxes with regard to what you would look for in a young player: bilateral, robust, resilient, agile, quick, humble and coachable. The latter, of course, only being applicable if you could think of anything to tell him to improve on or work on.

Already a three-time All-Star footballer with a scoring average akin to Cristiano Ronaldo, trying to stop him, or at least limit him, is top of every opposition manager's priorities when facing this Kerry team.

Granted, Mayo were down a half a dozen starters and still went man to man but lacked the intensity that has embellished great performances by them in recent years. James Horan and Co looked like they had one eye on the upcoming Connacht championship. After all it is the championship that their season will be judged on. It will be the same for Jack O’Connor in his third stint with Kerry and he is following the same template as his first two sojourns in the Kingdom hot-seat. A league title in his first season that was quickly followed by All-Ireland glory. Ominous for everybody else.

Keith Ricken and his backroom team have less than one month left in preparation for Kerry and Clifford with the most likely venue now being Páirc Uí Rinn. Containment of football's poster boy is no longer a task for just one man, even though Clifford’s recent record against Cork definitely wouldn’t figure on his highlight’s reel.

In Cork’s last-gasp, rain-soaked 2020 Munster SFC semi-final victory in Páirc Uí Chaoimh, Clonakilty man Maurice Shanley had the better of Clifford. In 2021 in Killarney, and despite Cork being hammered, Sean Meehan earned himself an All-Star nomination for the man-marking job he did; the Kiskeam man held Clifford score-less from play. The bad news for Cork is that joint captain Meehan recently underwent an operation so he is out of the picture. Shanley didn’t figure at all in the league due to ongoing injury problems but did play in a recent challenge game at full back.

The split season is no friend to the guy who picks up an injury during the league campaign as the window between league and championship has shrunk substantially. The depth of Cork’s hope of a decent showing on May 7th will depend on the recovery speed of the likes of Sean Powter, Cathail O’Mahony, Brian Hayes and, hopefully, Shanley. Keith Ricken and John Cleary will have no choice other than to withdraw players into defensive positions in the hope of closing down the spaces available to the Kerry attack, aided by the tighter confines of Páirc Uí Rinn. Clifford’s coronation seems inevitable and Cork need all their homework done to slow down the Fossa juggernaut.