BEFORE the recent Bons Secours premier senior football final Haulie O’Neill couldn't have imagined a better position for Clonakilty to be in with the clock going into the red.

Having played to their full potential and rattled the foundations of this Barrs team for the previous 60 minutes, the sides were level. It was 0-13 apiece. The game was in the balance. It could have gone either way.

After the semi-finals I wrote about big plays, big characters and clutch kicks that decide games. Steven Sherlock scored 0-7, three from play and yet he was well shackled by Thomas Clancy for the duration of this pulsating encounter. However, cometh the hour, cometh the man. I was sitting behind the Barrs dugout when Barrs substitute Eoin McGreevey burrowed his way through a couple of tackles as Sherlock, on one of the rare occasions during the game, stole a yard on Clancy to take the pass.

On gaining possession and turning to bear down on goal to take on Clancy, before he shaped to kick Paddy Hayes had his arms in the air in celebration. He knew the right man had it, in the right place at the right time. Sherlock stepped a yard outside the blocking range of his marker and with little or no back lift slotted the winner. Time was almost up. Clon were given one more play by overly-fussy referee David Murnane but Mark White’s long-range effort drifted wide. The Andy Scannell Cup was in Ian Maguire’s hands and heading back to Togher.

Eoin Comyns and Eoin Dennehy replaced Cillian Myers Murray and Eoin McGreevy in the Barrs’ pre-game reshuffle. They went back to their tried and tested winning formula of packing the middle third of the field with big men. For Clon, Irish international ice hockey player Odhran Bancroft was given big boots to fill in replacing the cursed Liam O’Donovan at wing back and he acquitted himself admirably on the biggest of occasions.

The match-ups were intriguing. Clancy took Sherlock. Maurice Shanley took Conor McCrickard. Ben Ridgeway took Ian Maguire. On the Barrs side, Alan O’Connor took Sean McEvoy, Billy Hennessy took Ross Mannix with Sam Ryan pushing out on Dara Ó Sé. However, the most riveting battle of the day went on between David Lowney and Colin Lyons. Lowney, again, proved a key figure in Clon’s kick-out strategy and if Clon had won would probably have got man-of-the-match. 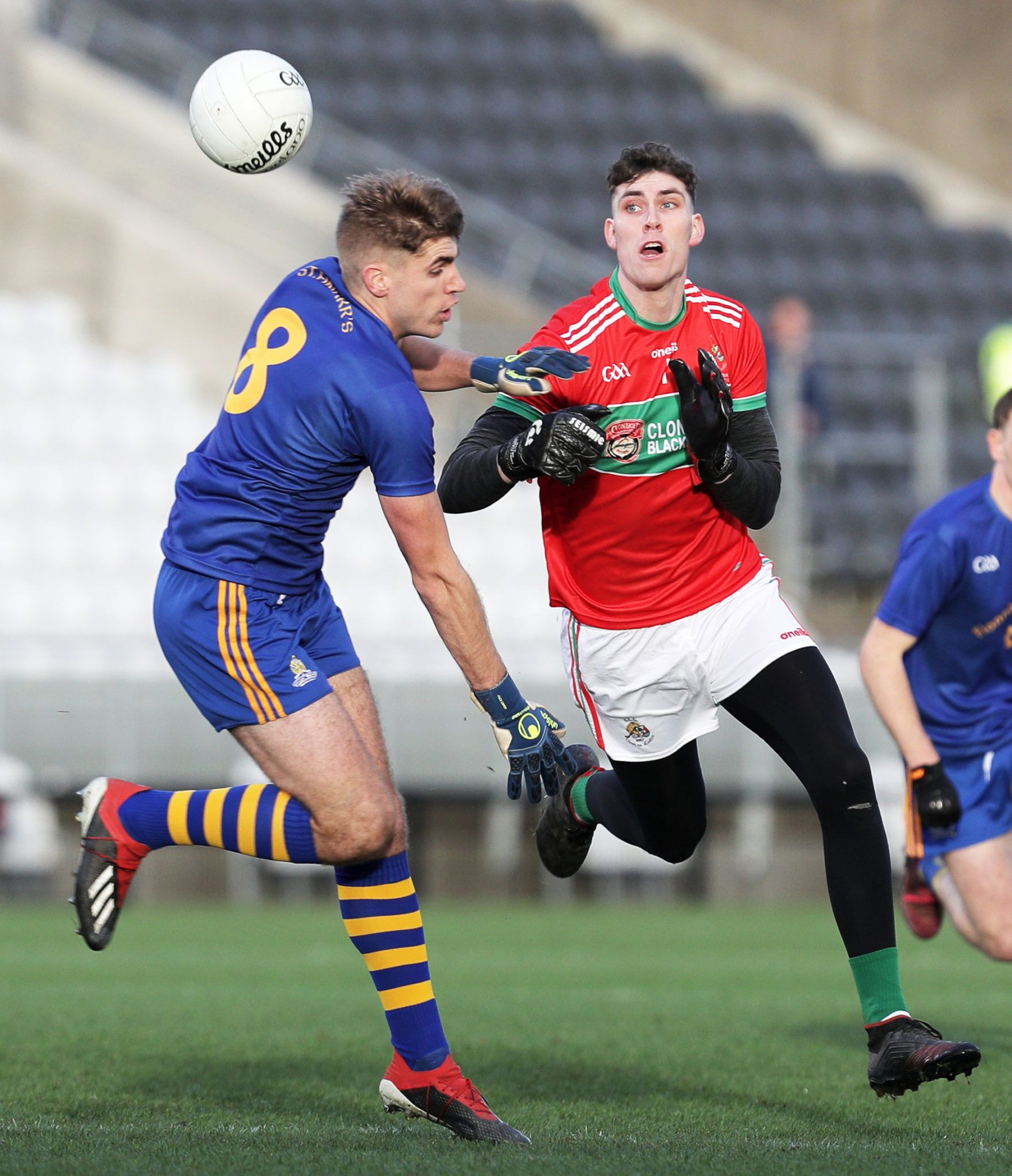 The Barrs were slow out of the blocks with the Brewery Town men taking a 0-4 to 0-2 lead into the first water break. In the Barrs huddle there was only one player talking at this break and that was Ian Maguire. For the next two quarters, despite the best efforts of Ben Ridgeway, he tormented the Clon rearguard with his barrelling, energy-sapping runs. He improved his performance hugely from the semi-final and deservedly took the man-of-the-match award.

The second quarter of the game is one that Clon will look back on with some dissatisfaction. They lost it on the scoreboard 0-4 to 0-0, leaving the Barrs with a 0-6 to 0-4 half-time lead. In the opening quarter Ben Ridgeway lost Maguire with a wonderfully timed run down the middle that led to him ending up one-on-one with John Kerins. He did the right thing; he went low but didn’t connect with the necessary power to beat the goalkeeper. In the second quarter Joe Grimes found himself in a similar situation only for Kerins to come up trumps again with Ross Mannix completely free to his right for an open goal tap in.

The kickout stats were pretty evenly matched with the Barrs on a 70 percent to 30 percent win-lose ratio and Clon winning 21 out of their own 24 kickouts. Mark White showed again that he is the best keeper in the county. Along with his kick-outs, his sweeper-keeper role created overlaps and drew defenders time and again.

However, the standout stat was the Togher outfit turning Clon over in possession 19 times to Clon’s seven over the hour.

This game was played in third gear for the first half hour but as the temperature rose in the second half so too did the Barrs’ contact and physicality. Clon captain Eoghan Deasy’s quality in the tackle stood out but as the game progressed it was up the other end where, time and again, Sam Ryan, Billy Hennessy and Alan O’Connor got that vital fist to the leather as a Clon forward was about to collect inside the 45.

Earlier in the game Clon had been delivering lovely diagonal 30-yard foot passes to the advantage of the likes of Mannix and McEvoy. In the final quarter particularly, these passes were straighter and more 50/50 and the Barrs inside backs excelled. Over the hour the Barrs replaced Brian Hayes, Enda Dennehy, Denis O’Brien, Colm Barrett and Conor McCrickard with equal quality in Shields, McGreevey and Myers-Murray, as examples. The strength of their bench was imperative in their victory. Clon just didn’t have those resources available.

Every Clon player can walk away from this game with their heads held high and reputations enhanced. The sting of defeat will be there for a few days but this will go down as one of their greatest performances in a county final.

Hats off to their management team who brought this group a long way in a short period of time. When they played Ilen Rovers in Ross back at the group stage or when they were six points down with 15 minutes to go against Duhallow, if you told them they would go on to put the hot favourites for the county championship to the pin of their collar in the final they would have bitten your hand off.

This is a great platform for Clon going forward. They are a young team with Thomas Clancy the eldest at 29 years old. We can all look forward to West Cork group derby matches next year with a renewed hunger, edge and venom.