GREAT players do great things when the need is greatest. As former heavyweight boxing champion Wladimir Klitschko once said, ‘Mental strength is really important because you either win or lose in your mind.’ The great American football coach Vince Lombardi said ‘Mental toughness is a state of mind, you could call it character in action.’

Cristiano Ronaldo, time and again this season, has come up trumps at crunch moments for Manchester United. Think of Lionel Messi at his pomp for Barcelona. Peter O’Mahony’s final minute jackal against the All Blacks last Saturday. Add to that list Brian Hurley’s and Steven Sherlock’s clutch kicks at key times last Sunday in Páirc Uí Chaoimh as Castlehaven and St Finbarr’s slugged it out in an epic Cork Premier SFC semi-final.

If I was trying to come up with the most exciting set of scenarios that could possibly happen in a game of football I wouldn’t have gotten close to the drama provided for us by amateur players on a summer-like day in top-class facilities on the banks of the Lee last Sunday. A repeat of last year’s semi-final classic between Haven and the Barrs.

Barrs ace Steven Sherlock finished with 2-10, 2-6 from play. Haven hero Brian Hurley finished with 2-9, 2-3 from play. Hurley's consistency for Castlehaven has been well documented but Sherlock has moved his game to a new level this year and will surely see a starting red jersey next season.

This game will go down as an all-time classic as it ebbed and flowed, going one way then the other with Hurley and Sherlock the main protagonists in the story of this game, which needed penalties to separate the two.

The two semi-finals contrasted in styles. The Douglas v Clonakilty game was cagier and more defensive. The main event, Haven v Barrs, was shackles off, toe-to-toe, man-to-man. Both teams left their inside defenders one-on-one so the major battle took place in the middle third and any time the lines were broken it looked goal on, going both ways.

The Barrs started with Alan O’Connor on Brian Hurley and Sam Ryan on Michael Hurley. I could not believe my eyes when I saw the acre of space that was being left in front of the twin-pronged attack. Brian Hurley struck for two goals early while Michael Hurley picked up an ankle injury when bearing down on goal which literally finished his contribution to the game and changed the dynamic of the Haven attack. Sam Ryan now took Brian and even though left isolated throughout made Hurley work hard for everything he got.

At the other end Damien Cahalane was assigned to Sherlock. As penalty saver, penalty taker, goalkeeper and match-winner John Kerins said in his after-match interview ‘he’s our shooter, we wait for him.’ I was surprised Damien Cahalane was given the man-marking job as David McCarthy had been fulfilling this role all year. From my own experience with Carbery Rangers, when the Haven put Damien back on John Hayes I always saw it as an advantage to us. I don’t see him as a man-marker and it takes away from Castlehaven’s game. How it takes away from their game was shown in the third quarter when he drove out from the full-back line on three or four occasions and arrowed brilliant foot passes into the aforementioned space turning the game back in the West Cork men’s favour.

Cahalane and Mark Collins are their two main suppliers of quality ball and with the way the Barrs were set up, the Haven needed their second high-quality kicker. Mark Collins matched up on Ian Maguire and what an outing the Haven man had. It was fascinating to watch live how he took Maguire’s game away from him. To see Maguire heading for the full-forward line in extra time was a sight I hadn’t seen before. Every time Castlehaven recovered possession Collins took off on runs out the wing and deep into attack dragging Maguire with him. Then if they got turned over Maguire had huge ground to make up to make his usual barrelling runs down the middle.

Now Castlehaven might have felt crowding the middle was a necessary tactic to curb the Barrs' big runners and it worked to a degree but they will rue not shutting this game down when three up with four minutes to go in extra time. The Barrs brought fresh players off the bench with varying levels of impact, the key word being ‘fresh’. Castlehaven ended up bringing guys back who had been substituted earlier. 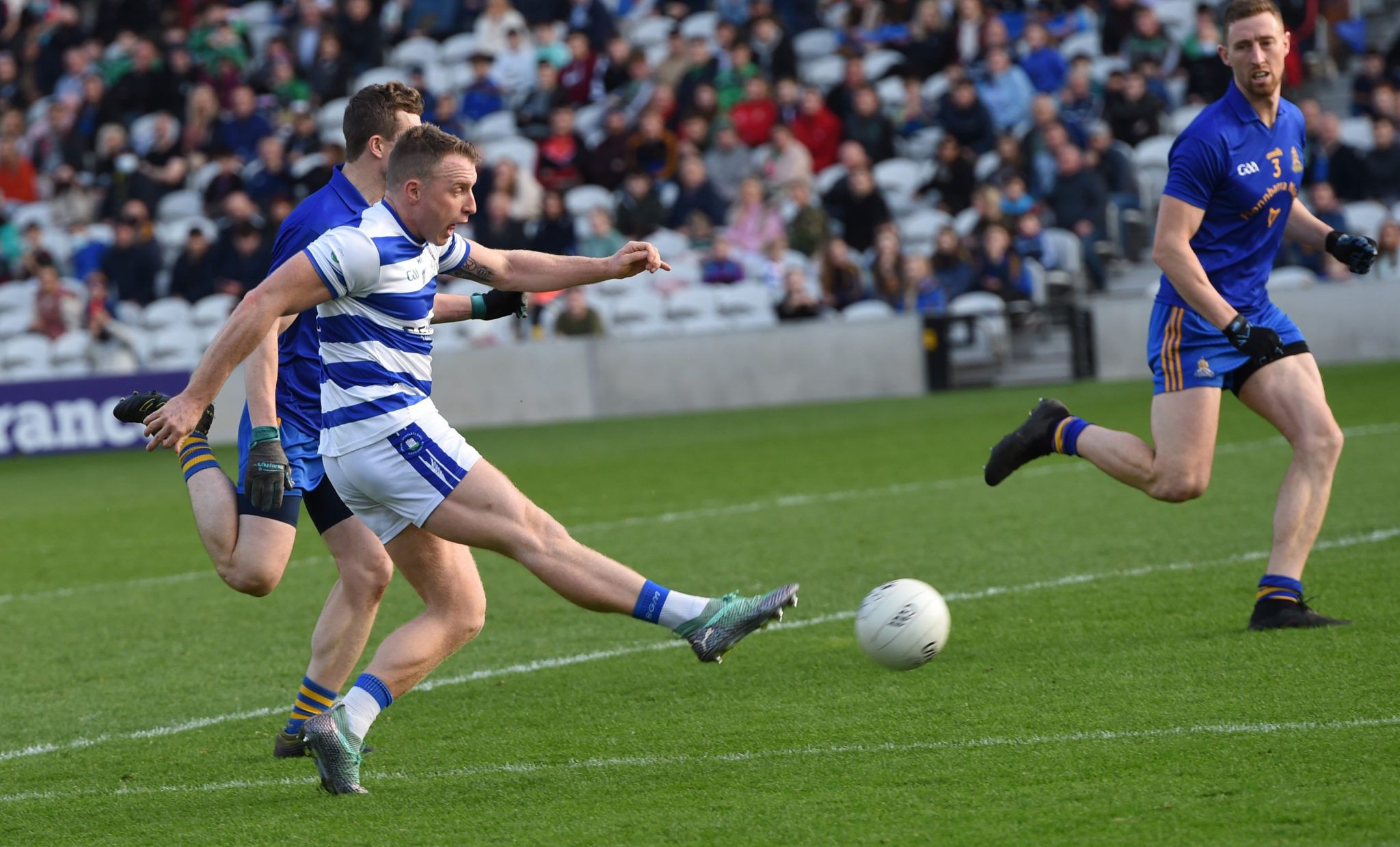 Castlehaven ace Brian Hurley arrows this shot at goal during their semi-final against St Finbarr's.

So after all the drama and successive penalty shoot-outs the honours are even, one win apiece. This time the Barrs march on and will be favourites against the Brewery town men in the county final on November 28th, but that will suit Haulie O’Neill’s men just fine.

Clonakilty have surpassed all their expectations to reach the county final, but they are here on merit. Compared to earlier rounds there was one big difference to Clon’s play in their semi-final against Douglas. Last Sunday when Sean White, David Lowney, Liam O’Donovan and Joe Grimes crossed the half-way line they were getting their heads up and looking to deliver 30-/40-yard kick passes into space for the likes of Sean McEvoy and Ross Mannix. Faster ball equals scores and McEvoy made hay. He finished with four from play and fouled for another three converted frees with Mannix contributing two from play.

Again, Dara Ó Sé was well held from play but kicked magnificent frees from range and angles. Eoin Deasy was in trouble early on against David Hanrahan but encapsulated Clon’s resilience with a defiant long-range point from play before the first water break. The ferocity of the battle between Sean Powter and Liam O’Donovan was summed up in their scramble for the breaking ball from the final kick-out with Clon a point up, which Liam won, possibly injuring himself again in the process.

Clon should never have been in the position where they were hanging on after leading by five points with less than ten minutes to go. The Douglas defence was solid, the Hartnett brothers at midfield gave Grimes and Ben Ridgeway all they could do but once they got to the Clon 45 they were clueless. They persistently tried to punch holes down the centre in a well-organised and condensed Clon rearguard who were patient, got around in numbers, dispossessed and broke.

Sean White was inspirational. His score after the second water break when he bundled Brian Hartnett out of his way and set sail on a 70-yard dash to clip the ball over was immense. He is back playing his best football in his best position at wing back. David Lowney’s pace off the mark created an easy outlet over and over for goalkeeper Mark White from the re-start. Thomas Clancy again showed his class, blotting out Conor Russell and contributing handsomely to Clon’s build-up play.

The passage Douglas will most regret was before the second water break when they looked like they might make a fight of this. Mark White drew a black card off their best forward and free-taker Alan O’Hare. Conor Russell had just missed an easy free off the post, he was then withdrawn. Brian Hartnett then assumed the free-taking duties and missed one from 20 metres in front of the goal.

All said, Clonakilty are getting better game on game and the Barrs showed there are plenty of chinks in their armour. If Clon had a choice they would have chosen the Barrs.