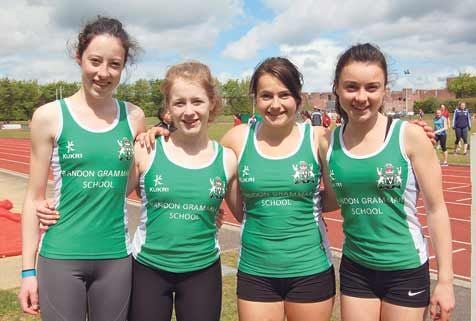 CONTRASTING weather marked the two-day South Munster Schools’ Track and Field Championships which took place at the CIT in Bishopstown.

The girls’ event on the first day saw blustery but dry conditions with continuous rain falling throughout day two, but despite this there were a number of impressive performances including a number of meeting records.

Irish schools’ cross-country champion, Caoimhe Harrington of Coláiste Pobail in Bantry was a clear winner in the intermediate 3,000m on the first day when coming home alone in a time of 10:54.9.

A new record was established in the junior shot putt where Shauna Linehan of Coláiste Treasa, Kanturk, improved the previous best by 24 centimetres with her throw of 11.14m.

Coláiste na Toibhirte, Bandon, won the minor and intermediate girls’ relays, both times from Bandon Grammar School, while the latter were successful in the junior grade.

The highlight of the second day was Scott Gibson’s removal of one of the most impressive marks from the books when winning the senior 400m 49.45, improving the previous best of 49.92, which had stood to Cathal Owens since 2009.

The 17-year-old Bandon GS athlete had earlier won the 100m in 11.22 and now has the European junior 400m standard as his main focus. The A time is 47.3 and the B time is 48.2 and Gibson’s next opportunity to get it will be the Munster schools on Saturday or the AAI Games the following day.

Darragh McElhinney (Coláiste Pobail, Bantry), unbeaten in schools’ cross-county over the winter, had an easy win in the junior 1,500m in 4:31.16. He will be another to watch out for when the GloHealth Munster Schools take place at the same venue this Saturday.

Bandon schools again dominated the relays with the Grammar School winning both the intermediate and senior events.