AFTER disappointingly losing last year’s final, St Mary’s are back in the decider for the second successive year after a real battle with Newcestown in the semi-final in Ahiohill last Sunday.

This RCM Tarmacadam junior A hurling semi-final went right down to the wire before Mary’s were able to celebrate their second victory over Newcestown in a week, their footballers having beaten the men from St John’s last weekend.

This local derby was a tough, hard encounter, with a torrential downpour midway through the second half making life almost impossible for the players. To their credit, they battled through the conditions to provide the attendance with a cliff-hanging finish as Marys’ four-point lead at the second water break was reduced to a dangerous two in the last quarter.

‘It was a great game of hurling from a neutral point of view,’ explained St Mary’s manager Michael Dineen.

‘It was a tough, hard game to play. It was a tough decision for us to play without Jason (Collins) who tweaked his hamstring in the football game. He is our captain and talisman, 11 points against Kilbree, and it was a great sign of the team to win without their captain. The lads put in a huge effort to make up for his loss.’ 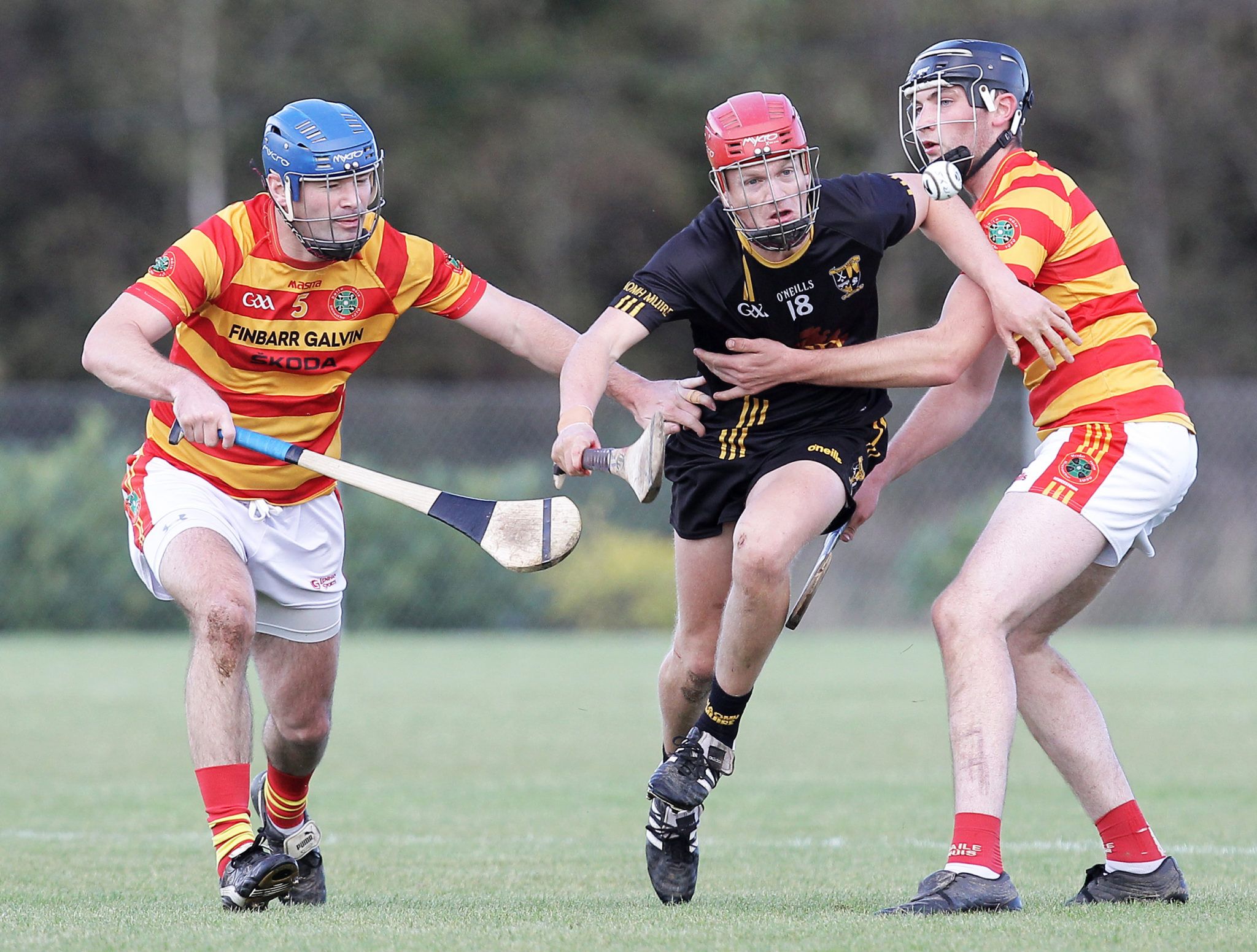 Playing with the strong breeze, it was Newcestown who hit the ground running in this semi-final and an opening point from a Cian Healy free was followed in the fourth minute by a superb, batted goal from full forward Trevor Horgan, as he connected with a great centre from Rick Bradfield.  In the first half, Horgan, the Newcestown danger-man, was double-marked, with centre forward Ryan Scannell doing a fine sweeper job in front of the Mary’s full-back line.

A point from impressive centre back Mark Courtney had Newcestown five to the good in a perfect start and Mary’s were struggling to get involved. Just before the water break, the Ballineen/Enniskeane men finally began to get a grip on proceedings and points from Darren O’Donovan (free) and Finghin O’Driscoll had the lead down to a single goal, 1-2 to 0-2, at the water break.

St Mary’s improvement, against the breeze, continued in the second quarter with Dylan Scannell and, especially the livewire Niall Kelleher, taking a firm hold of midfield. Points from Darren O’Donovan (free) and Dylan Scannell, two long-range frees, had the sides level, 1-2 to 0-5, before Newcestown shook themselves again. Points from frees by Healy and Courtney had them two to the good, 1-4 to 0-5, at half time. It was advantage St Mary’s in view of the strong breeze in their favour in the second half.

Within seven minutes of the restart, Mary’s were level as points from midfielders Niall Kelleher and Dylan Scannell (2) sandwiched a single response from classy wing forward Darragh Curran. Another free from Scannell had Mary’s in front for the first time in the game as the rainstorm began, making life miserable for players and supporters alike.

Padraig Collins levelled the scores again and the crucial score of the game arrived in the rainstorm in the 42nd minute when a long free from Dylan Scannell flew into the net, with Darren O’Donovan in close proximity under the dropping ball. A point from the outstanding Niall Kelleher and it was Mary’s to the fore, 1-10 to 1-6, at the second water break. Thankfully, the rain disappeared and the sun shone in the last quarter as Newcestown began to show their real battling qualities in an effort to save the game. When Cian Healy (free) and Darragh Curran pointed, the lead was down to two and the battle raged. With Kelleher and Scannell leading the way at midfield, well supported by Peter Daly, Mícheál O’Driscoll, Rory O’Connor, Ryan Scannell, and Brian Everard, Mary’s were not giving way in their bid to reach the final again and it was the Black and Amber who had the last say with another free from Scannell.

Considering that Mary’s had to line out without their injured captain and top marksman, Jason Collins, this was a praiseworthy win for the twin villages.

‘The goal was absolutely vital in the second half,’ said manager Michael Dineen. ‘Once we got the goal, we weren’t going to lose it.’