A SUPREME team performance saw the mighty men from the Mountain swoop to capture their second Bandon Co-op JAFC title in whirlwind style at jam-packed Ahiohill.

Defensive tactics were very much evident resulting in a low-scoring encounter with goal-scoring opportunities at a premium. However, the prizes at stake were massive – entry into the new Cork Premier JFC grade in 2023, contesting the 2022 Cork JAFC quarter-final while, of course, bragging rights and possession of the magnificent Mick McCarthy Perpetual Memorial Cup.

Cometh the hour, cometh the magnificent Ardfield men. Rangers can have little qualms about the result because the displays that saw them deservedly advance to this juncture, where their deep defensive strategy had worked a treat, failed completely to fire this time out. St James were more than equal in negating the ploy.

Rangers were totally out of the game for the opening quarter, got their act together somewhat as the game progressed, but St James bided their time and struck four crucial sledgehammer blows of white flags between the 38th and 48th minutes when the men from the monastic settlement were down to 14 men. After that, despite spirited Rangers’ resistance in the closing minutes there was no way back. 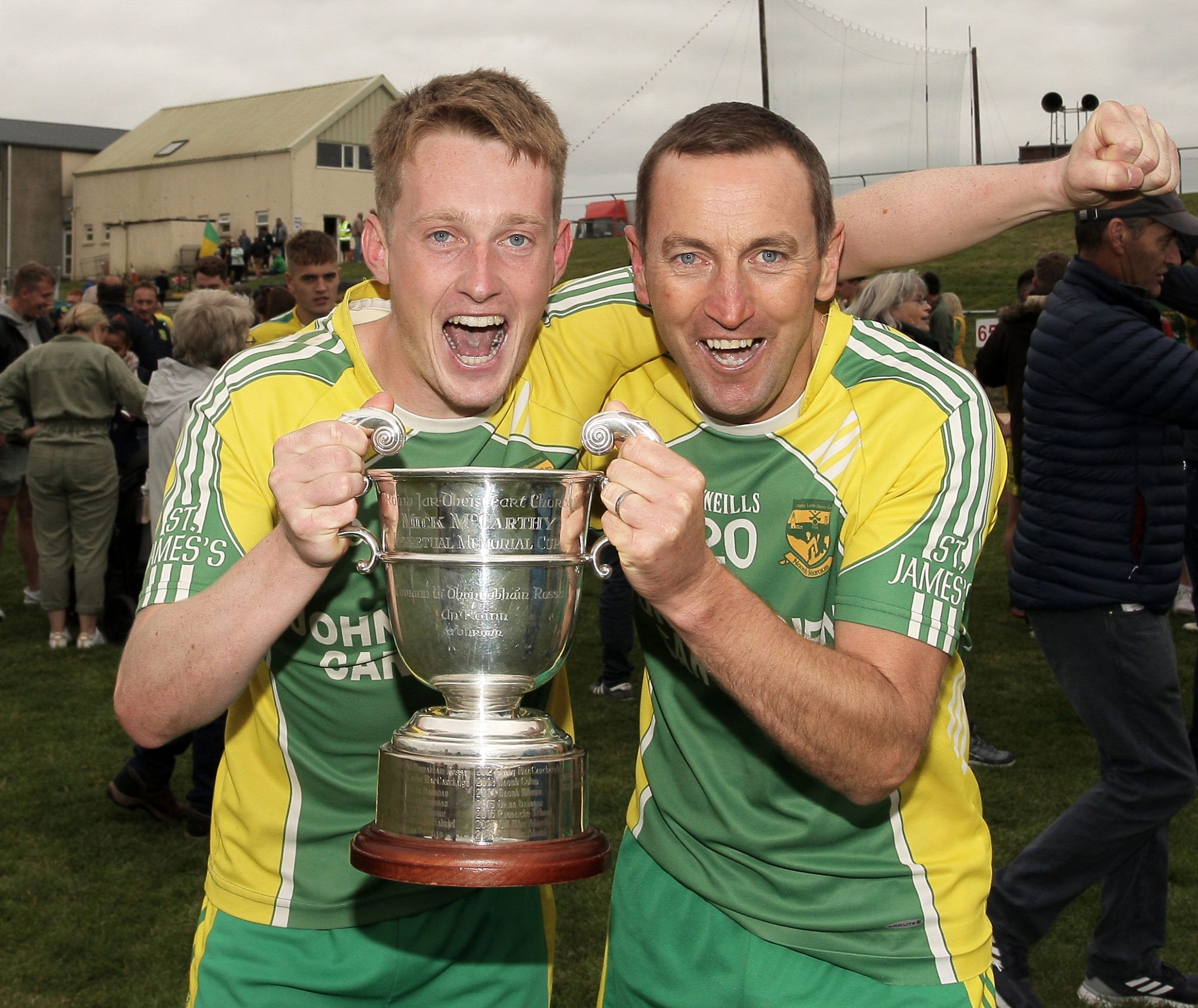 Aided by the still breeze the Saints were up and running from the throw-in. Midfield general James O’Driscoll created havoc and bisecting the Argideen posts after just 44 seconds. Captain fantastic Conor Hayes raised a second white flag as a sweeping move involving Aaron Hayes, James O’Driscoll and Frank Hayes saw the latter hit the target in the eighth minute.

It was all the Saints at this juncture as the two Micheál McCarthys, James O’Sullivan, Tadhg Feen, Cristoir Hayes and Peter Whelton were equal to Argideen’s best attacking attempts, though Darragh Holland, Fergal Walsh, Bill Fleming, Gerry Crowley and Paudie Butler had their noses to the grindstone.

Joe O’Sullivan and an Aaron Hayes free extended the winner’s advantage before an Argideen attack, living on crumbs, finally got on the board. The reliable Darragh Holland slipped over a free in the 13th minute. A good upfield sally by Fergal Walsh brought a fine save from Niall Evans as Argideen upped the ante in the 24th minute. Two minutes later the aforementioned Fergal Walsh, one of Timoleague’s few success stories up front, hit the target following good play by brother Sean and Bill Fleming. 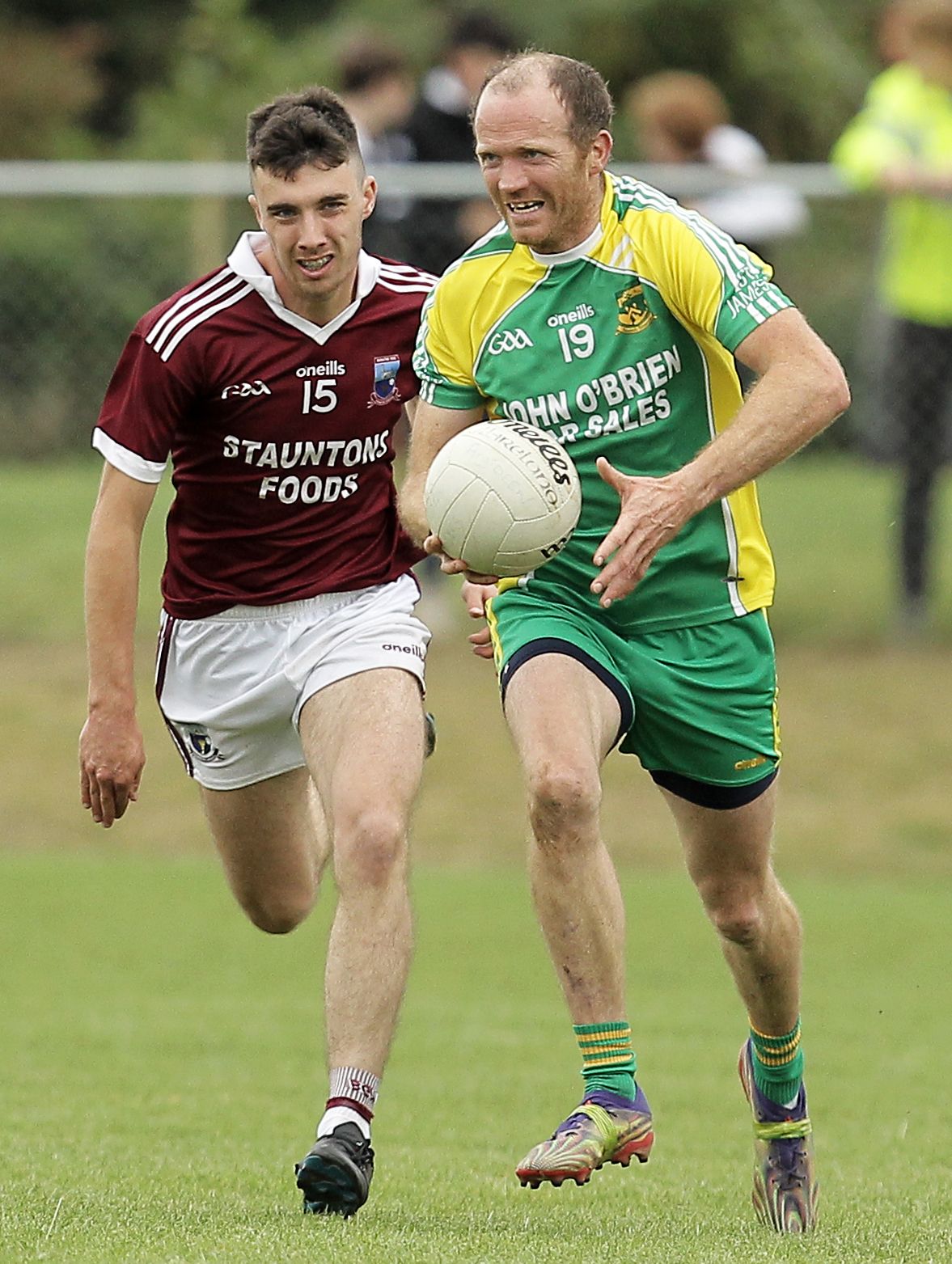 But it was an indication of the threat that a dominant St James posed when only heroic goalkeeping by Luke McCarthy foiled Aaron Hayes with a spectacular save in the 30th minute.  The half-time score read St James 0-5 to Argideen Rangers 0-2, the winners, only for prodigality in front of goal, should have been out of sight at the break.

Now aided by the wind Rangers rejigged their formation but upbeat St James again threatened as the brilliant Luke McCarthy thwarted Aaron Hayes. The Saints introduced Ian Evans and Paul O’Sullivan with positive effect as Rangers still hung in, albeit now with more possession. Then disaster struck as the influential Paudie Butler was black-carded. In the interim, St James, now numerically superior, made scoring hay. While the sun failed to appear on a dull afternoon, Ian Evans (free) Conor Hayes and a brace from the brilliant Frank Hayes put the victors in pole position and illuminated proceedings, 0-9 to 0-4. A Darragh Holland free and a lovely score by Fergal Walsh  sandwiched in between, following a good move involving Finbarr Butler and hard-working captain Gerry Crowley, held out faint hopes of a Timoleague comeback.

Both sides emptied their benches as frees by Frank Hayes and the proactive Ian Evans had the huge Ardfield following on the hill erupt into delirious delight. A long-distance superb point by Paudie Butler was of little solace to Rangers as massive St James’ celebrations triggered emotional and richly deserved delight.