Big test: Clonakilty and Sean White are preparing for a huge Cork SFC round-two tie against O'Donovan Rossa on May 24th in Rosscarbery. 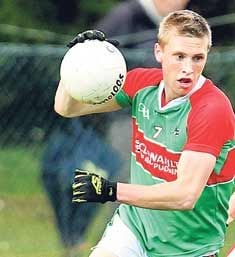 Big test: Clonakilty and Sean White are preparing for a huge Cork SFC round-two tie against O’Donovan Rossa on May 24th in Rosscarbery.

VARIETY is the spice of life, they say, but in the GAA it’s the surprise results that keep us spiced up. The county senior football championship hasn’t let us down by throwing up a few noteworthy results.

The championship defines a team, defines whether a season is a success or failure. The introduction of the back-door system almost proved the death knell for first-round games until it was decided to introduce relegation. Now it’s vitally important again to win that first round game to stay out of relegation trouble. It has certainly brought the bite back into the first round games.

Looking at the senior football championship, there are some teams in the losers’ group who definitely would not have expected to be there and the quality of some of the beaten teams is such that the relegation group could turn into a real battle.

The first surprise result, but not to those who had been watching league form, was the defeat of Clonakilty by Newcestown. In truth, it wasn’t so much that Newcestown won as they have been very competitive in recent years but it was the ease at which they dismissed the Clon challenge and how poor Clon were on the day.

Clon may be in transition but the display was one of their poorest in a long time. They have been slow starters in the championship in recent years and their supporters will be hoping, with a few returned stars, that they can get it together for their losers’ group game with O’Donovan Rossa.

Injuries also played a part in Rossas’ defeat by Bishopstown but that result wasn’t in the surprise category as the city side is capable of beating any side on their day. Inconsistency is their problem.

What the defeat of Rossas and Clon did show is that size and strength does matter in modern Gaelic football and both sides lost the physical battle badly on the day, lacking the necessary physique.

One team that has learned to cope with lack of size is Dohenys, who invariably field small teams. They play a style of football that suits them but have been in relegation trouble in recent years. Their win over Aghada was a small surprise and means they can now enjoy the rest of the championship, free from the cloud of relegation.

Another team that skirts with relegation every year, and are at the foot of Division 3 of the league, are St Nick’s. They somehow pull out one big performance each year to retain their senior status. After losing to Douglas they will be favoured to go down but don’t put your money on it.

Nick’s opponents in the losers’ group will be Ilen Rovers, who themselves looked like providing the big shock of the first round against Nemo. However, it all went wrong after the break. Bottom of Division 1 of the league, Ilen will be anxious to get over Nick’s next time out. Easier said than done.

People usually look to Carbery footballers to have a good run in the championship but they bit the dust against a UCC team that was unstoppable on the night. Backboned by Kerry men, the college team looked unbeatable that night but will we see that team in action again in the championship?

We expected Castlehaven to have too much football for an ultra-defensive Clyda Rovers and so it proved but what we didn’t expect was that Brian Hurley would see red for the second year in a row in the championship – a disaster for the team and for the player himself.

Without doubt, the biggest surprise in the senior championship came with the defeat of last year’s finalists, Carbery Rangers, by Valley Rovers.

This was one of those nights for the Ross men when the fates conspired against them. They were the better side, despite all the injuries, and should have seen the game out but Valleys never know when to give up – remember the U21 final against Clon two years ago? – and they pulled this one out of the fire.

Having seen a lot of teams in action in the first round, we would rate this Valleys’ team, winners of the premier intermediate last season, as having the best potential of any team in the championship. Physically, they are a huge side and they know how to use their physicality. They also have a good mix of experienced players and up-and-coming U21s.

Clonakilty v O’Donovan Rossa is the mouth-watering local derby clash of the second round. Going on first-round form Rossas must be favoured to take this one but Clon are proud of their senior record, the longest in the grade since 1932.

Ilen Rovers, if they can reproduce their first half form against Nemo, will be favoured against St Nick’s, but the Blackpool men are born survivors. This could be a real battle.

Carbery Rangers will eye their injuries with concern before their clash with Clyda and over-dependence on John Hayes for scores against defensive Clyda makes for an interesting scenario. Still, Rangers should have the football to come out on top.

St Finbarr’s, who gave champions Ballincollig a good run in the first round, will be favoured to overcome Aghada but the Togher side are perennial under-achievers and this is a banana skin fixture.