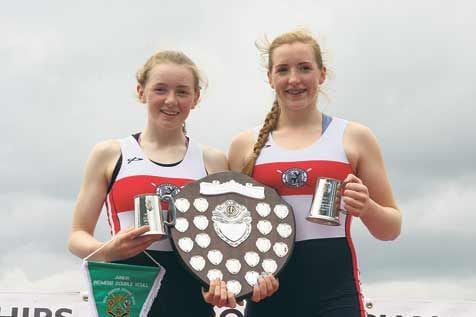 IT was a history-making weekend for Skibbereen Rowing Club at the national rowing championships at Inniscarra.

Skibbereen won four national titles over the three-day event, an achievement that brings the club’s tally of championship wins to a staggering 150 since it was founded in 1970.

Skibbereen Rowing Club is now level at the top of the honours’ list with Neptune Rowing Club in terms of national titles won.

This is a great honour for the club which has been by far the top club in the country over the past decade.

Racing kicked off on Friday with the women’s senior coxless four of Shelly Dineen, Natalie Long, Bernadette Walsh and Lydia Heaphy, who finished in third place.

Shelly, Natalie, Bernadette and Orla Hayes also competed in the senior eight with UCC, finishing a strong second behind UCD.

The club’s first championship win of the weekend was won by Emily Hegarty and Aoife Casey in the women’s junior 18 double scull.

They took an early lead and finished seven seconds ahead of the Bann crew.

Aoife and Emily were joined by Niamh Casey and Ellen McCarthy in the women’s junior 18 coxless fours. This was one of the tightest races of the day with Bann taking an early lead. The Skibb girls pushed hard through the middle of the race and finished an agonising 0.36 of a second behind the Bann crew.

Justin Ryan and Fintan McCarthy were the two main competitors in the men’s lightweight single scull. It was close between the top three the whole way down the course.

Justin was first to cross the line, winning another national title for the club with Fintan putting in a sprint finish to claim the second spot.

Emily Hegarty, Louise O’Sullivan and Lydia Heaphy competed in the women’s junior 18 single scull. Louise and Lydia rowed well but missed out on final spots. Emily put in a strong performance in the final in rough conditions, coming second.

Aoife was then joined by Niamh Casey, Emily Hegarty and Ellen McCarthy in the junior quadscull to win her third title of the weekend.

This crew set out with intent after missing out on the women’s junior four on Friday. They blasted ahead off the start and rowed strongly throughout the race to claim the club’s 150th title.

Fittingly, this was the club’s sixth year in a row winning this event and Skibbereen have been dominant in this event throughout the years.

Skibbereen Rowing Club was well represented in the men’s senior single scull with both Justin Ryan and Erik Rowan making the final. John Keohane from Lee Valley Rowing Club finished first in this race but Erik and Justin were close behind in second and third positions.

Kenneth McCarthy and Murray Connolly raced well in the men’s senior and intermediate coxless pairs, narrowly missing out on titles.

Other crews also put in good performances throughout the weekend just missing out on the finals.

Reaching 150 titles is a major achievement for a small club and every member has contributed to this in different ways.