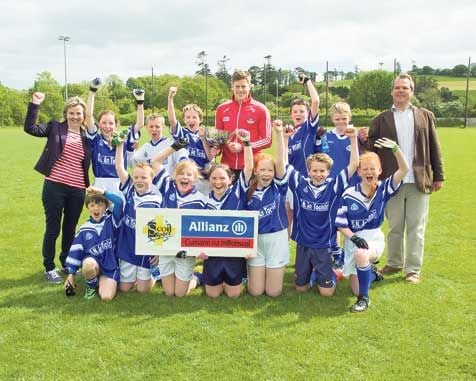 THE Rebel Óg West U14 championships semi-finals take centre stage this weekend with seven semi-finals down for decision.

This Thursday night (June 11th) Kilmeen meet near-neighbours St Oliver Plunkett’s in an U14 C game in Clonakilty. Kilmeen will be hoping to advance to the final and will be reliant on Thomas Tyner at midfield to help his team to victory.

Plunkett’s will be hoping the speed of their forwards will cause problems for the tight-marking Kilbree lads and Plunkett’s possess one of the quickest forwards in U14 football in Padraig Healy, brother of the well-known athlete Phil Healy. The winners of this tie advance to meet Kilbrittain in the final.

In U14 D, league leaders Iveleary play Goleen who lie second in the league. Both teams are undefeated this year so it is hard to call this game. Kimichael meet Glengarriff in the other semi-final in Ballingeary on Friday night.

In the B championship Bantry Blues will be hoping to cause a big upset when they play Féile winners Ballinascarthy in Castletown-Kinneigh on Saturday night.

A great game of football is guaranteed for spectators in Skibbereen on Saturday night also when Tadgh MacCarthaigh meet Ilen Rovers. The Caheragh boys will be looking for big performances from Killian Murray and Paddy Burke. Having easily accounted for Ahán Gaels in the quarter-finals they are favoured to advance against their opponents on this occasion.

The first of the A semi-finals takes place in Dunmanway this Thursday night – Newcestown v O’Donovan Rossa.

Newcestown will be hoping to advance to the final following their recent defeat in the Premier 2 U14 hurling championship at the hands of Blarney, who subsequently went on to win out that particular championship.

The Skibbereen boys, who have won two of their five league outings, will have to keep a close eye on Newcestown’s ace forward Eddie Kenneally if they are to succeed in this encounter.

The last semi-final takes place in Rosscarbery on Saturday evening when Gabriel Rangers will hope their very fast and energetic team will have too much football for an ever-improving Sam Maguires team.

Sam Maguires will be hoping for big performances from the three Forbes, Kevin Coughlan and Darragh Collins. Gabriels will be hoping James O’Regan, Keith O’Driscoll and Co will have their shooting boots on.

All in all there should be plenty entertainment and scores galore for patrons at these games. The finals of these championships are down for decision next week.

After a break for the June bank holiday weekend the U12 leagues resumed on Monday night. Newcestown footballers made the long journey to Rath on Monday night and led at half time, 1-6 to 0-6. On the resumption the Ilen boys took control and thanks to two goals from Michael Sheehy and Sean O’Shea the home side went on to record a victory on a scoreline of 2-10 to 1-8.

Clonakilty’s U12 footballers had a good of 5-13 to 5-4 win over Sam Maguires on Monday night in a fine sporting game in Ahamilla.

Clon benefitted from a good start where Conor Daly, Erin O’Donovan and Aaron Griffin were to the fore. They held their advantage throughout and fine performances by Gavin Coakley and Rory White helped them to an impressive win.

On the same night the Clonakilty U11 team also enjoyed a win over Sam Maguires. This team showed great improvement from previous games and good defending by Grattan Neville, Adam Crawford and Killian Kearney was a big factor in the win. Others to catch the eye on the night were Fergal Murphy and Cian Ryan. Final score in another entertaining game was 8-14 to 6-03.

In U14 football St Colum’s travelled to face Ilen Rovers in Rath on Thursday last and despite putting up a decent score of 3-12 they still ended up on the losing side.

Ilen were able to find the net too easy on this occasion and had Jack Crowley in sparkling form as he scored four goals in the opening half. Further goals from Darren Daly, Patrick Legoupal and Ciarán O’Dwyer helped the Ilen boys to a comfortable victory.

Colum’s had good performances from Jack Desmond, Michael O’Shea, Joseph Cato, Liam Geaney, Ruairí O’Connor, Sean Brady and Jack Murphy in a very good overall team display. St Colum’s are the first team in the West region to complete their football league programme of games for 2015 and now await other results to see if they qualify for the league play-offs.

U13 A Football League

U13 B Football League

U13 A Football League

U12 Hurling Group A

U12 Hurling Group B

U14 A football championship

U14 A Football League

U14 B Football League

U13 A Hurling League

U13 B/C Hurling League

U12 Football Group A

U12 Football Group B

U12 Hurling Group A