CLANN na nGael’s triumph in the West Cork U21C football championship has given the whole club a huge lift, insists the masterminds behind the Scorchers’ triumph.

In November they defeated Kilmacabea in the semi-final (0-13 to 1-6) before proving too strong for St Colum’s in the final (3-13 to 0-4), as the club got their hands on some very-welcome silverware.

In fact, this was the Scorchers’ first U21 title in any grade since 1980. Forty-two years is a long time but the team didn't get caught up in the long hoodoo, because they weren’t aware of it!

‘We didn’t know about that stat until the night before the final,’ said Alan Keane, who is part of the management team alongside Tomas Hayes and Leo Collins.

‘We had won very little in the last while,’ Keane admitted. ‘There’s always an incentive, and that’s the reason you play the game. It brings the buzz around the place and we were starved of success for a few years.’ 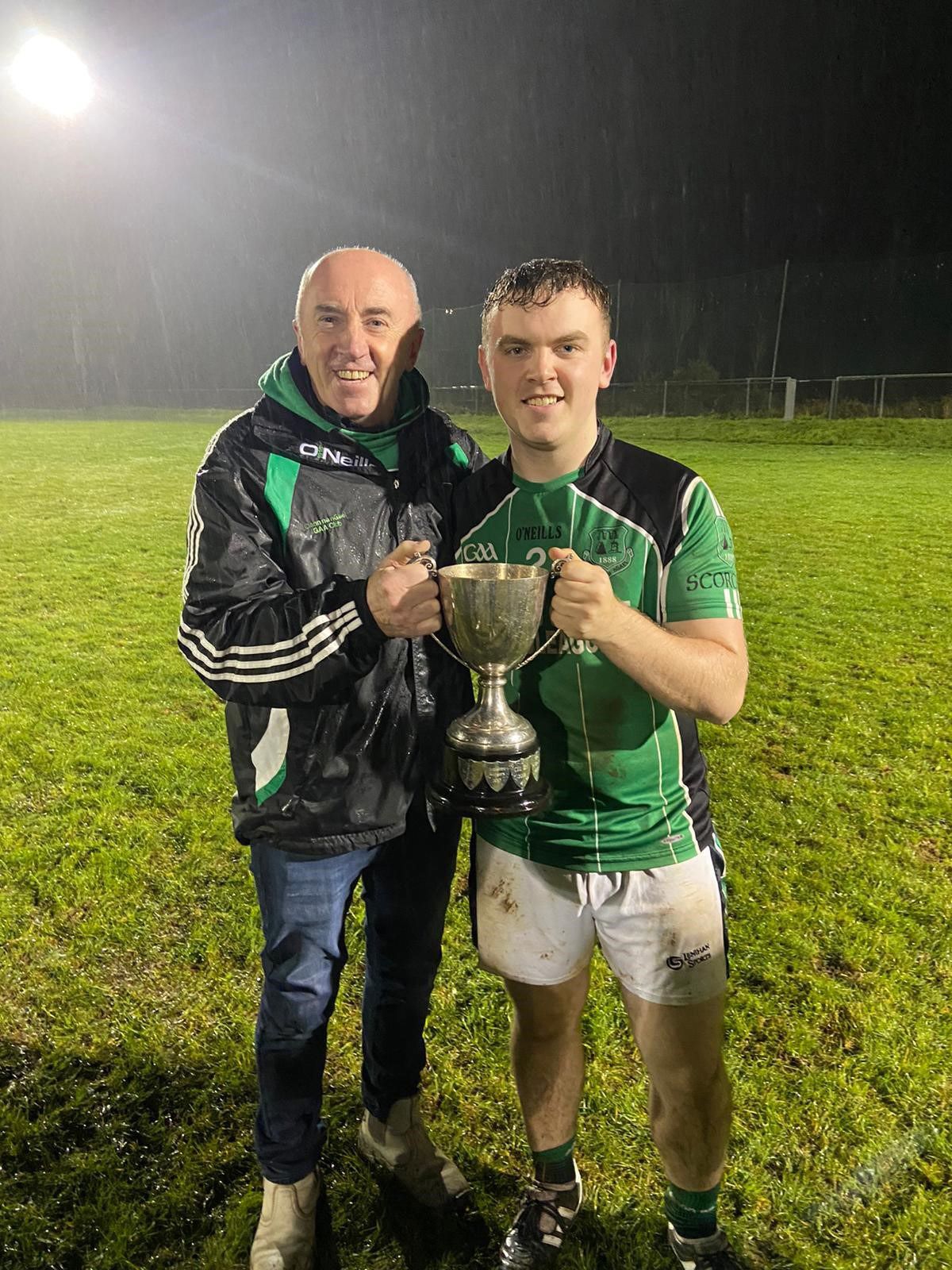 Ronán O'Driscoll holding the cup with his father Martin, who was a member of the last Clann na nGael team to win a West Cork championship in 1980.

Tomas Hayes added: ‘It’s been a very good year, the guys put in a huge effort. The one benefit we had was that some lads were involved in our junior team this year. It flowed from juniors into U21s. The junior was disappointing at the end but overall there was a nice flow.’

Clann na nGael’s junior B side went out in the quarter-finals of the Carbery junior B championship after losing 1-16 to 1-12 against Diarmuid Ó Mathunas. Still, Leo Collins took positives out of the juniors’ campaign into the U21 competition.

‘We knew the club needed a bounce. We knew both teams had to be successful. The juniors qualified out of their group, which was a positive,’ Collins said. ‘It then fell back on the U21s’ shoulders to get a bounce off them. The C competition is sometimes regarded as weak but we had good teams down there.

‘The fact the championship was run off in the autumn and not spring, we had a fully dedicated seven to eight weeks with the players directly. Once the junior championship finished, we kicked off straight away. We had a consistent 14 or 15 training most nights, which gave us a good chance to get stuck in. We built a bit of a culture there too; culture eats strategy for breakfast.’

Playing in the third grade of West Cork U21 football championship presented the Scorchers with an opportunity to build and create – and they grabbed it. Some players who weren’t eligible to play U21 were still willing to train with the group, which shows the eagerness of the even younger Clann na nGael players to step up in years to come.

‘The C grade gave us a chance to grow players, especially younger ones. If they’re used to winning, it really gees up everything. Whereas, if they’re getting clobbered at U21 level (A and B grades), most of them wouldn’t bother playing junior football,’ Alan Keane explained.

‘The U21 is such an important competition for small clubs. They get their own competition and it feels so important. It just keeps them involved. In GAA, that’s where you lose most fellas.’

The whole community got behind the Scorchers’ U21s, too, and it’s why this success was celebrated as it was.

‘It’s given the whole club and community a bounce and a lift. We didn’t actually foresee winning out the competition because of the stiff nature in this championship. The lads did a tour of the schools with the cup and all the kids were kitted out in the gear. Just seeing the youngsters looking for pictures and autographs was very enjoyable,’ Leo Collins said.

‘Hopefully, that’ll go into next year and get more numbers into the club. Bringing those young players all the way to junior is very important for rural clubs. We need to create an ethos and comradery in the club.’

Clann na nGael will, more than likely, not gain promotion to the U21B championship for 2023, so the challenge will be to defend a title the club had waited a long time for.  They will start as defending champions, and that’s a nice position to be in.