On the run: Clonakilty's Ross Mannix bursts past Castlehaven's Brian Deasy during the Clona Milk U21 A football championship final at Rosscarbery on Sunday. 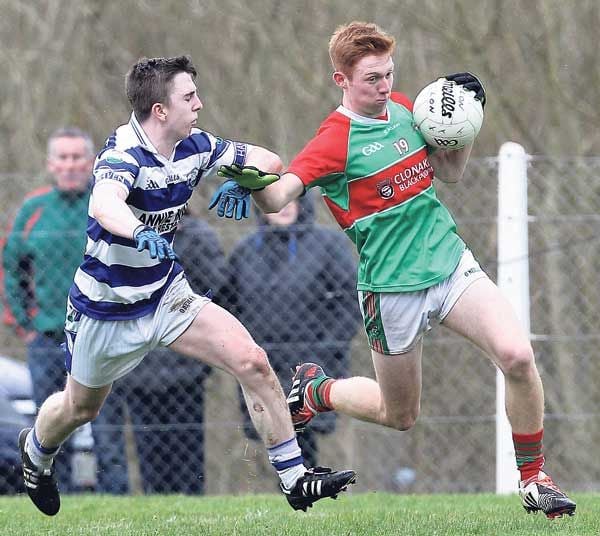 Clonakilty’s Ross Mannix bursts past Castlehaven’s Brian Deasy during the Clona Milk U21 A football championship final at Rosscarbery on Sunday.

MARTIN Scally and Clonakilty have set themselves a new target – win a county U21 A football title.

The celebrations after Sunday’s third South West success in a row were enjoyed by all involved with the team, but this latest local triumph will now be parked to one side as captain Scally and this all-conquering Clonakilty team set about winning the one trophy that has escaped their grasp over the last few years.

A heartbreaking county final loss to Valley Rovers two years ago was as close as they have come, and with four Clon players in their last year as U21s – Scally, Colm Sheehy, Ian Falvey and Colm Crowley – there’s some unfinished business to take care of in the months ahead.

‘At the start of the season there was some talk of the three-in-a-row in West Cork but we brushed that talk aside, and we just focussed on ourselves. What happened before is gone,’ Scally said.

‘We set out our stall at the start of the year that we wanted to get to a West Cork final, and that we wanted to push on and win it. We have done that, and now we will target the county and push on in that. We felt we have left ourselves down there over the past few years.

‘Winning a West Cork is always hard but we have won it three years in a row now, and we want to push on. Look at Castlehaven winning county senior titles, we want to win county titles too and that has to be our target now.’

Sunday’s success over Castlehaven was richly deserved in a game where Clonakilty always looked the more likely winner, and Scally feels that Clon’s work rate played a big part in the win.

‘Castlehaven always play good, open football, and so do we, so it was always going to be a high-scoring game. The scoreline doesn’t reflect how hard it was,’ Scally said.

‘We had to work for 60 minutes. We felt that we left ourselves down a bit against Newcestown in the semi-final because we didn’t work as hard as we should have.

‘We upped it (on Sunday) and when push came to shove we were on top.’

Leading 1-7 to 0-4 at the break, and after dominating the first half, Clonakilty were given a reminder at half time that they couldn’t afford to take their eye off the ball in the second half – and they didn’t.

‘At half time we were six points up and we were comfortable enough, but we were brought back down to earth when we were reminded that in their semi-final, Castlehaven trailed Ilen Rovers by seven points at one stage and came back to win. You can never write off Castlehaven, whether you are seven or ten points ahead of them,’ the Clon captain said.

Before Clon embarked on this three-in-a-row adventure, Scally quipped that before that the last thing this team had won was an U10 blitz in Clonakilty, and now that they have the winning feeling they don’t want to let it go. The county series can’t come quick enough, with Seandún opposition awaiting.