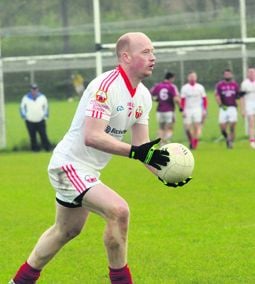 Big loss: O’Donovan Rossa will feel the absence of defender Alan Tanner who won’t be in action this Sunday.

SHANE Crowley has urged his O’Donovan Rossa players to use Sunday’s Cork SFC round two clash with rivals Clonakilty to kick start their championship campaign.

The Skibbereen club lost to Bishopstown in the first round (2-14 to 2-11) and, similar to last season when they also lost in the opening round (to Clyda Rovers before then beating Aghada), they now need to pick themselves up for Sunday’s massive West Cork derby.

Ideally, Crowley explains, Skibbereen wanted to take the direct route to round four, but they have to make the most of the cards they’ve now been dealt with.

‘That’s the vagaries of the back-door system. If you win your first round you have a 12-week gap before the fourth round, while if you lose and you can win your second round you probably are in a better position because the gap between matches isn’t as great and you have had an extra game full of intensity,’ Crowley mused.

Still, there’s a lot of football to be played in Rosscarbery this Sunday to decide which of these West Cork heavyweights advances to round four.

The clubs clashed in the opening round of the 2011 championship, a game also held in Rosscarbery, and Skibb won 1-14 to 2-9 – a similar result would be welcomed with open arms this weekend.

‘Clon and Skibb have had a huge respect for each other over the years. We beat them a few years ago in Rosscarbery, but they beat us in the league this year,’ Crowley said.

‘They are off the back of three South West U21s in a row and they had four Cork minors playing against Kerry too so football is alive and well there, but at the same time they are coming into this game under pressure as well.

‘No one wants to get into a relegation battle. Both teams see themselves as contenders so that adds to the pressure. It might reflect in the way the game goes. I hope it’s a free-flowing football match but when you add pressure to that, it can take on a life of its own.’

Crowley and his management team have their own decisions to make ahead of Sunday’s game, with the Skibb midfield proving to be a weakness compared to other top teams in the competition.

But this is down to nature rather than football reasons, according to Crowley.

‘For some strange reason we don’t seem to produce six-foot four, big, athletic men,’ he said.

‘We do our best to put good, honest footballers in midfield, but it’s hard work when you are competing against physically bigger men in there.

‘It’s up to us as the management team to work out what we think is best to make sure that we vary kick outs, that we compete under other team’s kick-outs. It’s more a natural problem than a football problem because we don’t have the physiques available to us to compete against the six-foot four footballers.’

On Sunday’s game, Crowley said: ‘If we up our work-rate – and that’s key to Sunday’s game – and improve our intensity then we will have a chance, but we know that we really have to improve on both those aspects for the Clon game. Our work-rate and intensity wasn’t good enough against Bishopstown and the lads know that.’