GIVEN that playing GAA professionally isn’t a viable option, being involved in the games as part of work is probably the next-best option and that’s the case for Carbery Rangers goalkeeper Ronan Milner.

His week is occupied as Cork, Kerry, Tipperary and Waterford area sales executive for McKeever Sports, the Armagh-based firm who he has helped to make inroads into the GAA kit market. As well as signing his native club up, Milner has also secured Castlehaven, Bishopstown, Glen Rovers and Sarsfields for McKeever while the Cork ladies’ football team account is also a major contract.

Having first studied recreation and leisure in CIT, he then graduated from the Bishopstown college as a bachelor of business and spent two years on the road for Macroom-based Ted Kelleher First Aid & Hygiene Supplies.

Then, fate played its hand in 2017 as his housemate, O’Donovan Rossa’s Dónal Óg Hodnett, was on the Cork football panel at the time and received a message in the panel’s WhatsApp group.

‘A player put it into the group that this job was going so I actually just googled the number and rang straightaway,’ he says.

‘It hadn’t even been advertised so the girl on reception didn’t know what it was about. She put me through to Noel Hegarty, who’s my boss now, and he was wondering too as only about five people knew!

‘He said to send on the CV and he emailed me back when it was advertised so I could apply properly online and the rest was history.’

Largely left to his own devices in terms of establishing the brand in the south, Milner was able to call on a lot of contacts built up through his involvement in GAA.

‘I would have had a good background,’ he says. ‘I had a good bunch of GAA friends in college and I was training the ladies’ football team in CIT for two years and I was involved with Keith Ricken on the freshers team.

‘It’s all about networking – I had a good spread based on all of that and would have had a good base in West Cork and then I got to know John Grainger in UCC. I became friendly with the right people and business has grown since then.’ With the market very competitive, challengers like McKeever have to box clever to try to gain a foothold.

‘We’re putting three-year deals in place, which is a new development,’ Milner says, ‘previously, it was just a case of a club ringing a supplier when they needed a new set but now there’s a big market there.

‘We’re offering special incentives to clubs, with benefits to them the more they sell.’

And, while the jerseys worn on the pitch are the main visual seen by everyone else, it is leisurewear which is the real business-generator.

‘It would be,’ Milner says.

‘The match-kit is a great way to get into a club but it’s the training wear, everybody wants the tops. The jerseys are massive underage, every kid wants a jersey, but you’re not going to see me walking around in a Ross jersey.

‘When I was growing up, everybody was wearing a Manchester United jersey or a Newcastle one but now it’s all GAA gear, which is brilliant.

‘I remember my first year on the Ross panel and getting a windbreaker top and I thought it was brilliant!’

It’s a much-changed landscape now, as evidenced by the success of Glen Rovers’ special jersey to mark the centenary of Christy Ring’s birth. Milner had a big part to play in its development.

‘I started in 2017 and we didn’t have a GAA licence and didn’t sell GAA jerseys properly – fast-forward three years and we have two teams in the Cork county finals, the Glen and the Haven,’ he says.

‘Tomás Mulcahy got on to me and said that the Glen wanted to put a memorial to Christy Ring on the jerseys, something small on the sleeve. Our graphic designer came up with a few and then I was googling and I found a photo of him and suggested putting it on the jersey to see how it looked.

‘I fired it on to them and they were all over it. They ordered 250 initially and you could pre-order on Facebook – the 250 hadn’t even been delivered and they were nearly all sold online.

‘They ended up ordering nearly 1100. Their bar and physical club shop were closed this year but that jersey went a long way towards making up for it.’

Of course, he has a big input into his own club’s strips, too. This year, Milner played in a goalkeeper shirt he designed himself while the fact that Ross’s Premier SFC opener with Castlehaven was shown live on television was a great advertising opportunity for McKeever. 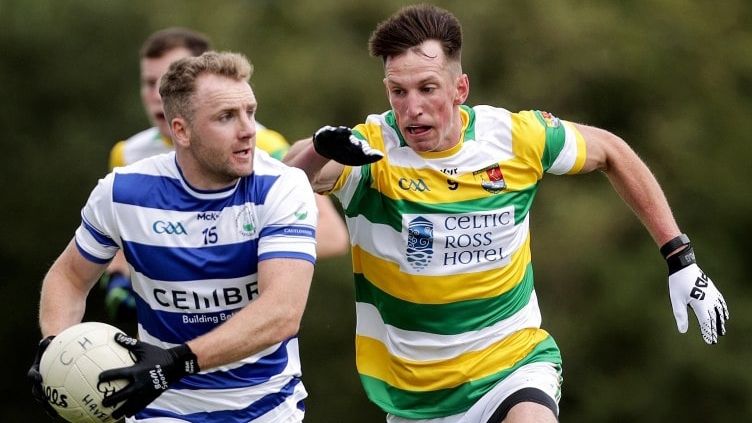 ‘All the previous jerseys we had just had the Celtic Ross Hotel written in black and I was looking at other jerseys and thinking that it would look a lot better with the proper logo,’ he says.

‘I got two jerseys done up and sent them on to the chairman, Johnny Murphy, and suggested that we go with something like that going forward and thankfully the Celtic Ross thought it was a brilliant idea.

‘We didn’t actually need a new set this year but then it was announced that the Haven game was going to be on television and there was no hope we wouldn’t be wearing McKeever when I was involved!

‘The Haven had signed the three-year deal at the start of the year, they had a new sponsor so they had got a new set. It was teed up perfectly.’

Unfortunately for Ross, that game didn’t go their way and they exited the championship before the knockout stage but hope springs eternal.

‘It was a disappointing year,’ Milner says.

‘We’re looking at a new management, nothing confirmed yet but Haulie O’Sullivan has stepped aside and he has made a massive contribution as manager over the last ten years.

‘You look back at the Haven game – they were the better team but we could still have won it and things could have been different.

‘It was a tough year but you’d be looking forward to 2021 and doing well on and off the field.’