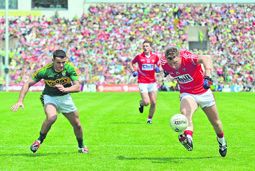 HANDS up, we do get it wrong (sometimes).

It was back in late April, the Saturday night before Cork’s league final schooling against Dublin, some 180 miles away from Croke Park, in Castletown-kenneigh, all eyes were on Alan O’Connor, in action for St Colum’s against Bandon in the South West junior A football championship.

Three days previously the shock news broke that O’Connor was coming out of inter-county retirement, so many watched with interest to see what shape the Colum’s man was in.

‘He was good, in patches,’ I was told later that night after Colum’s lost by a point, ‘but I’m not sure, to be honest. I don’t know is he the answer.’

Again, sometimes we get it wrong.

We got our answer regards O’Connor’s return to the Cork midfield on Sunday when the Colum’s man did the simple things right. This wasn’t Hollywood football, but it didn’t need to be. He made 12 tackles (more than anyone else), won three kick-outs and his possession stats of 17 was the fifth highest on the Cork team, and only one Kerry player touched the ball more (Bryan Sheehan, 19).

Cork need a physical presence in midfield, which has been a problem area for some time, and O’Connor fits the bill – but the majority were surprised at his man-of-the-match showing.

That Cork bossed midfield, for large parts, against Kerry owes much to the mindset of the team last Sunday, the kick-out strategy and the work-rate – David Moran’s black card was also a help.

When he started the Munster semi-final against Clare, O’Connor said he felt he had to show the other players on the Cork panel that he deserved his spot. He wanted to prove himself. He now has, to everyone.

O’Connor set the tempo. He was not going to be beaten last Sunday. The same goes for Eoin Cadogan. Ditto for Barry O’Driscoll. Donncha O’Connor. Colm O’Neill. Kevin O’Driscoll. Brian O’Driscoll. Mark Collins. This Cork team has endured enough. Their manhood was questioned. We got their response.

Two weeks out from this Munster final, I met Alan O’Connor for an interview outside the Westlodge in Bantry. He’s a gentle giant off the field, so I pushed him on the constant criticism this Cork team endures, their failure to perform on the big stage of late, how they have been written off.

Fair enough, he wasn’t involved since August 2013, but straightaway his tone changed. The smile was missing. He had his game face on.

‘Fellas don’t give a sh*t about what’s being said and written about them,’ he stated.

Stop poking the bear, I told myself.

O’Connor and Cork growled last Sunday, but, crucially, they still didn’t win. As impressive as they were, the fact remains that they didn’t finish the job.

This team needs to cross that finishing line first, and would have except for that dreadful penalty decision so aptly described on Twitter as ‘not the first, second or third cousin of a penalty.’ (Hat-tip to Ger McCarthy)

Cork would, and should, have won except for that turning point, but they didn’t, and they must go again, and go one better. Then they’ll be taken more seriously, because the doubts are still out there right now that it could all go wrong in the replay. Once bitten, twice shy.

But there was a resolve and a steeliness to this Cork team that we hadn’t seen before, plus they played smart football and the tactics were spot on.

The Kerry defence is there for the taking if you run at them. Cork got their rewards, three goals, and one or two more chances went a begging. Kerry don’t like when you run at them, and it’s one of the reasons why Colm Cooper didn’t start either – look at how easily he was beaten in the run-up to Cork’s third goal.

Make no mistake, Kerry were left stumbling by Cork’s all-action approach. With burrowed brows, Killian Young, Bryan Sheehan and Cooper escaped out a side door behind the dressing-rooms last Sunday after the game, deep in conversation about what had just happened.

Kerry need to improve, and have considerable room to do so, especially in terms of their work rate, but Cork also need to play better in the replay on Saturday week.

Brian Hurley is struggling to get into games at the moment, a lot of it down to Cork’s reluctance to hit their inside line with fast, direct ball. There’s a preference to hand pass the ball, and this was the option 71 per cent of the time last Sunday (178 hand passes out of 252 possessions).

Tony McEntee suggested that the quality of Cork kick passing is ‘below average’, but in Mark Collins and Paddy Kelly, Cork have the ideal playmakers – look at Collins’ pass in the lead-up to O’Neill’s goal, while Kelly was immense when he came on (he needs to start the replay).

Now Cork know that they can go toe-to-toe with the All-Ireland champions in their own backyard and outplay them – but that still wasn’t enough.

The top teams are clinical and ruthless. Cork weren’t last Sunday. When Kerry were about to drop to their knees, Cork missed the chance to knock them out when Colm O’Neill’s 45 dropped short. That was the chance.

Yes, Cork answered their critics for now, but Saturday week is the real test. Brian Cuthbert knows this and his manner and words after the game are encouraging from a Cork perspective. Drawing with Kerry was not acceptable in his book.

‘We needed to win but we didn’t do that. It would have been a watershed moment if we had won it, but we haven’t won and we need to go again,’ he told The Southern Star.

‘We need to get better. We needed to close that game out when we were a point up. We didn’t. There were huge reasons why we didn’t, outside of our control.

‘We’ll take confidence from this, of course, but the bottom line is that we didn’t win.’

Running Kerry close is no good to Cuthbert, he knows Cork need that victory to finally shut up the knockers who, if it goes pearshaped in the replay, will rise again.

That’s now the challenge for Cork – to go one better.

The belief is there – ‘it always was,’ insists Cuthbert – and now the fans on the terraces can see the possibilities, and they are starting to believe too.

It’s only half time in this Munster SFC final, there’s still a massive test ahead, but Cork have given themselves a fighting chance that very few thought they had in them.

The obituaries were being readied, if Cork failed to perform last Sunday, but, at last, they did, surprising everyone, even Kerry.

But they’ll know themselves while one swallow never made a summer, neither does a good performance in Killarney translate into redemption, especially when Cork still didn’t win the game.

Fionn Fitzgerald was offered free pints for life by one Killarney bar, The Shire, after his last-gasp equaliser, a sign of relief after a bad day at the office for the All-Ireland champions. They won’t be as off-the-pace again, so it’s Cork’s challenge to up their own game, piece two performances back-to-back, and prove everyone wrong, again.

They stunned us once, now they have to repeat the trick when their secret is out – this is a bigger test again.