THEY only occupy a small corner of the parishes of Dunmanway and Drinagh but for Randal Óg, small is beautiful. Their fine headquarters nestles in Ballinacarriga, under the shadow of the ruined castle of Randal Óg Hurley, after whom the club is named. As outlined in their fine history book, written by Fin O’Donovan, they were founded in 1953, and are your quintessential junior B club, always aspiring to acquire junior A standard but their limited playing resources don’t usually allow for such lofty notions.

With only one primary school to call their own, they haven’t the numbers to field their own underage teams and have been part of the Sam Maguires underage structure, which takes in the whole of the Dunmanway parish. Dohenys are the other club involved and it has been a worthwhile coming together as Maguires are recognised as one of the foremost underage clubs in Carbery and produces a stream of good, young players for both clubs. Such has been the case with the present successful Randal Óg squad, most of whom have starred with Maguires in recent years.

To compete in a county final, let alone win one, is the ambition of every GAA club and not all achieve that distinction. In 2021 Randal Óg have had the rare and unique achievement of playing in three junior county finals in one season, surely a record here in Cork.

The commitment and dedication needed to accomplish that feat, especially in a season shortened by the Covid pandemic, has been phenomenal. The junior football and hurling teams playing 28 weekends in a row, bar one. Amazingly, this was carried through with practically the same small panel of players.

Like all small, and many big, clubs, Randals have always had their share of blow-ins who have contributed enormously to the club, both on and off the field. Such a person is the present chairperson Frank O’Donnell.

‘I’m a native of Donegal, left home to go to London when I was 18 and arrived here in Dunmanway parish because of a woman, who is now my wife, Mary, a Dunmanway native,’ explained O’Donnell, whose Donegal accent has taken on a strong Cork tinge over the past 16 years.

‘I never played much GAA, although I was involved in the Tír Chonaill club in London. We had a choice of three schools for our kids and chose Ballinacarriga, where Eddie Moloney was the principal. Randals were just beginning to run Sunday morning sessions for anybody interested, old or young, boy or girl. My wife encouraged me to get involved and here I am now, chairman for the past eight years. Those open Sunday morning sessions, and later Friday nights, were the beginning of what we are achieving today. A lot of the girls became staunch members of the Doheny ladies football club and the Enniskeane Camogie Club.’

At underage, up to minor, Randal Óg are part of the Sam Maguire club with neighbours, Dohenys, and this has been the foundation of the present success for both clubs.

‘We have been well served by the Sam Maguire club as the young players are playing at the highest level, right up to premier,’ O’Donnell explained.

‘Dohenys have a very young promising senior team now, powered by young lads like Fionn Herlihy and Mark Buckley and at the same time, we had a very good young bunch coming through to Randals, like the Collinses, Sean Daly, Conor O’Neill and so on. They were well up to winning junior B counties.

‘As well, I can’t emphasise enough the role played by our local school, Ballinacarriga. Not so very long ago, there were only 27 pupils in the school, but now there have been two extensions and the number is almost up to 100. One of the teachers is Barry O’Driscoll, our ace free-taker on the junior football team, and he is a great example to the young lads.’

O’Donnell has no doubt what makes the Randals’ club the vibrant unit it is today and as chairman for the past eight years he has been central to much of what has been going on in the area.

‘What struck me from the very start was the fantastic community spirit here in Ballinacarriga. The spirit is amazing. Look at the community centre at the pitch, that was a wonderful community effort. The people involved scoured the county selling tickets. And look at it now, the vaccination centre for West Cork, offered by the community council to the HSE. We are proud of the part we are playing in the fight against Covid,’ O’Donnell said.

‘When we were looking for a government grant to build the centre, we went to Dublin and Ger Collins persuaded the Minister with a passionate speech. The same Ger, when we nearly had no U21 team a few short years ago, knocked on every door in the area until he got 15 players to line out. That is the spirit behind Randal Óg.’ 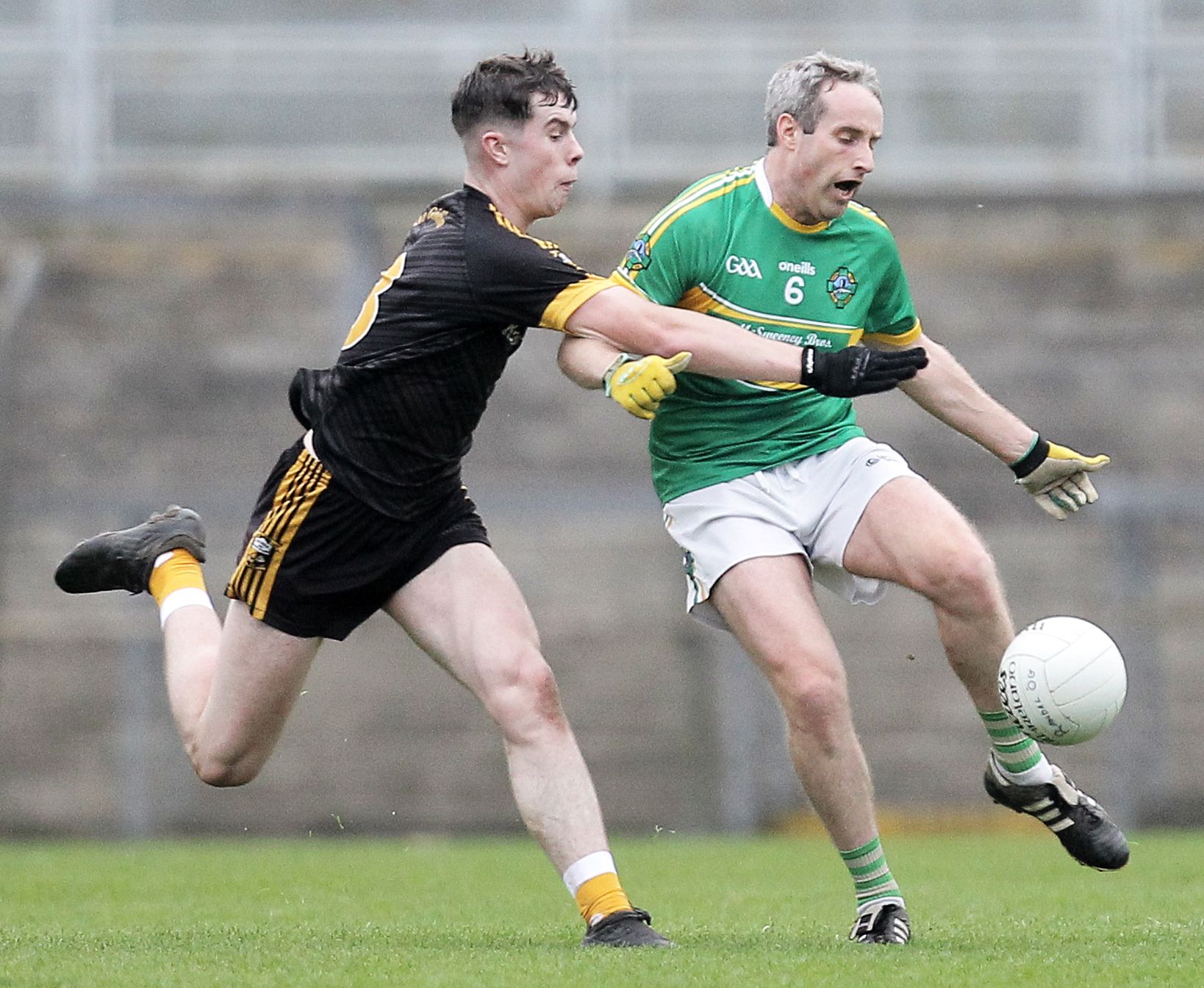 Randal Óg's Shane Patterson in action in the 2021 Cork JBFC final against Goleen.

The year 2021 has gone down in history for many reasons and for Randal Óg it was the year in which they played 28 games, football and hurling, in 29 weeks, played in a record three county junior B finals and brought home the first-ever county football title to the club. Needless to say, O’Donnell had a proud ring to his voice as he spoke about Randals’ achievements in 2021.

‘It has been some year, alright,’ admitted O’Donnell.

‘We did look flat and tired against Belgooly a few weeks ago but that was understandable after 28 games in a row and we had players involved in exams for the Dripsey game. But I must pay tribute to the players for their amazing commitment during such a busy season. What we are inclined to forget is that some of these players are very young and were still involved in minor games with Sam Maguires as well. And some are in colleges in Cork, Dublin and Waterford and are playing there.

‘The team that beat Goleen in the county final had about ten U21 players on it. But full credit, too, to the older players like Shane Patterson and Sam Kingston, who have provided great leadership along the way, they were fantastic.’ 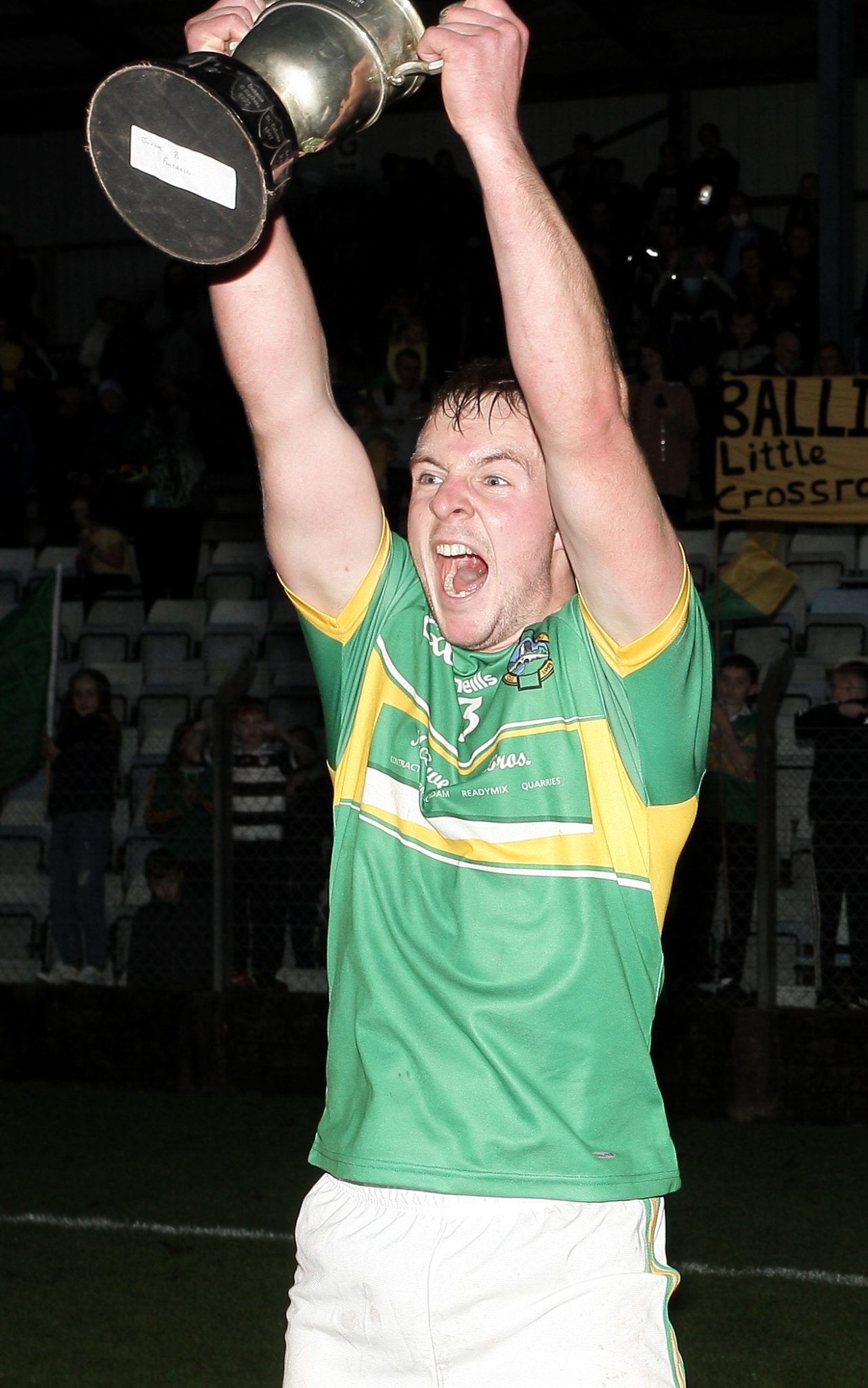 Having won their first-ever county junior B football final, Randals will now be promoted to junior A football for 2021. It will be their first time since 1979 competing in that grade. How does O’Donnell think they will handle that?

‘All we are looking for is that we are competitive in that grade and we will take it from there. As I said a lot of these lads have played at the highest grade underage and should be well able for junior A,’ the club chairman said.

‘You get out of anything what you put into it and that has been the case all this season, so we need to continue that next season. We would love to be competing in junior A hurling as well so that will be a big aim for 2022, to win promotion to junior A.

‘For the past 16 years, since we began the Sunday morning sessions, we have been building up a sense of belonging to Randal Óg for all our members, an identity with the club. It is an all-inclusive identity and is basic to who and what we are as a club. Get them all in and take it from there. We’re looking forward to 2022 already but after a good rest first.’

If you want a job done, and done properly, ask a busy man to do it. Look no further than Frank O’Donnell, the Donegal man who now lives in Gortnamucklagh in the Parish of Dunmanway and is the driving force behind the ambitious Randal Óg Club from Ballinacarriga. Keep an eye out for them in 2022.