RALLY co-drivers don’t always get the recognition they deserve. Most of the time it is the driver that gets the acclaim.

Last week’s Rallye Monte Carlo, the opening round of the 2021 World Rally Championship, was notable in a few respects in terms of co-drivers. Just days before the rally, Belgian Thierry Neuville announced that he was parting company with regular co-driver Nicolas Gilsoul. They had been together since 2012 and this was the partnership that won the Monte Carlo last year.

Neuville selected compatriot Martijn Wydaeghe to call the paceneotes in their Hyundai i20 WRC for this year’s event. It was a case of in at the deep end for Wydaeghe. Furthermore, last Thursday’s opening stage was their first time together as there was no shakedown stage in Monte on this occasion. They went on to finish a creditable third overall, setting a pair of fastest times during the 15-stage encounter where they were the highest-placed Hyundai crew.

Afterwards Neuville said: ‘A challenging start to the new season. We were able to find a solution to be competitive and, step by step were able to find more confidence in the car to improve our collaboration and to improve our speed day by day. To finish on the podium is a satisfying result, the job in the car has been really impressive considering the difficulties of Monte.’

Meanwhile, their team-mates, Dani Sordo and Carlos del Barrio, finished fifth on what was their final outing together; their partnership was a constant since 2018. Former Fastnet Rally winners Norwegian duo Andreas Mikkelsen and Ola Floene took their Skoda Fabia R5 to seventh overall and winners of the WRC2 category. The pair reunited for the first time since the 2015 season. The rally was won by Sebastien Ogier/Julien Ingrassia.

So, how important really is the presence of the co-driver? And what is required apart from sitting on the opposite side of the car to the driver? It’s a role that has changed over time. Previously, the term navigator was used but now in stage rallying, the term co-driver is the norm. On international events co-drivers can drive on road sections, although this doesn’t happen very often.

Essentially, the co-driver is the ‘office manager’ whose top priority is reading a set of pacenotes to the driver that incorporate descriptions of what lies ahead in terms of the severity of the bends, when and where to change direction. Communication between driver and co-driver is through headsets linked through their helmets. In addition to the paceneotes, the co-driver is also responsible for keeping the time cards that record the time taken on the stage and also the time due at the next time control, as well as liaising with the service crew.

West Cork co-driver, Owenahincha’s Eamonn Hayes provided an interesting insight into the role of rally co-driver. One word that kept cropping up during an interview was ‘trust’. It was to be expected. In fact, it’s inevitable, especially at any competitive level when margins are at the finest. Trust is really what gets you over the line. He has called pacenotes for a host of drivers but principally, and for around eight seasons, with Barryroe’s Damien McCarthy even though his first rally was with another local driver David Guest. So, is choosing to become a co-driver instead of a driver akin to deciding on being a defender or a forward in football or hurling? 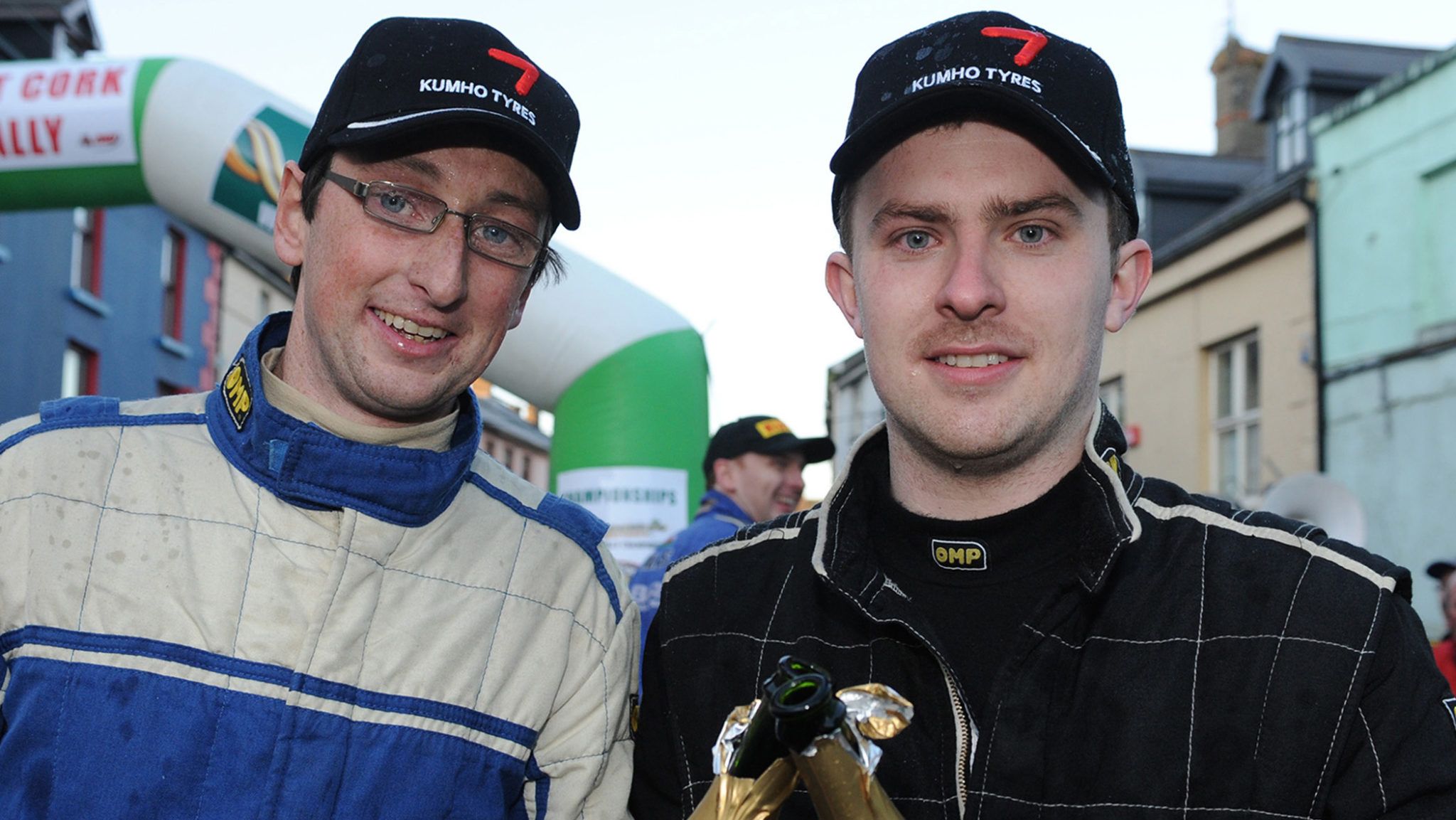 ‘I like driving, but when you co-drive for somebody who would do things in a car that you wouldn’t do, that gives you that different feeling, that is the buzz, it’s the adrenalin rush,’ Hayes says, as he recalls how he started out with David Guest.

‘We just happened to meet one night in Clonakilty and we got chatting about rallying. He was looking for a co-driver and, quite simply, that is how it began.’

But it just doesn’t happen that the partnership is ready to go. Most drivers and co-drivers see how they perform together by preparing pacenotes and see where the synergy is, how they adapt to each other and then reading back the notes. It can take time, but more often than not it’s obvious to both if the chemistry is present for a good partnership.

‘Co-drivers need to be calm but there must be trust on both sides. You could be a very good co-driver but if you don’t trust each other and get on with each other, then it doesn’t really work. It’s not all about the stage time, you have to build up that trust,’ Hayes explains.

‘Co-driving, and not just confined to the top end of the sport, has reached a level of professionalism that wasn’t there a few decades ago. Much of that is down to technology and the presence of in-car footage.’

Competitors regularly put footage of their performances online for all to see. That has repercussions and analysis can often be scathing, and some co-drivers feel it is ‘death by social media.’

The internet has given motorsport fans a great diversity and Hayes watches rallying from all around the world, yet he doesn’t wander too far to pick out his favourite exponent.

In terms of preparation, it’s the same procedure whether the event is in West Cork or anywhere up the country.

‘The local event is always nice though as there are more people you know and who will come out to support you. There isn’t any added pressure but you want to do better,’ he says.

‘Say for the West Cork with Damien (McCarthy), we would always begin with a clean sheet (writing pacenotes) while others like Barry Meade, say on a Killarney rally, he would modify (perfect) the notes from previous year’s notes on stages like Moll’s Gap,’ Hayes explains.

On occasions where the partnership is very new it can be different.

‘It takes time. I went to the Wexford Rally to compete with Mark Kennedy, who was from Wexford and was a quick driver down there. That was a very deep learning curve for me but we were okay by the end. It’s fine when everything works out well,’ Hayes explains.

Of course mistakes are made and there is no co-driver that hasn’t made an error.

‘It is how you recover from a mistake. It happens and drivers make mistakes too, there is such a fine line.  The co-drivers’ mistake are often more public,’ he points out.

2012 was an outstanding season for Eamonn Hayes.

‘Damien and I were seen as a team as we were together for many events, when he was mentioned so was I and vice versa. But when you hop around from one driver to another, there isn’t the same sense of gratitude or achievement.’

Hayes reckons that the Ardgroom stage is the pinnacle for co-drivers.

‘Depending on what driver you are with, you would have 15 to 20 pages of paceneotes where the longest distance is 80 yards. There is no let up, it is one of the most difficult stages but also one of the best. If you do a good job there, you can manage anything.’

Hayes was looking forward to competing with Glounthaune’s Denis Moynihan (Ford Fiesta R5) in last year’s West Cork Rally. No doubt, he will be ready when the action resumes in due course.