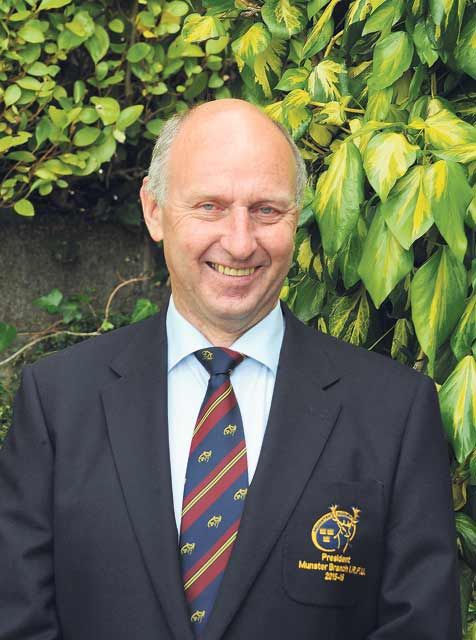 TIMOLEAGUE native Bertie Smith is the new President of the Munster rugby branch following a glittering playing and refereeing career that began with Cork Constitution back in 1973.

A former Irish U16 Irish triple-jump winner, Bertie Smith represented Bandon and Cork Con rugby clubs with distinction before making his full Munster debut in 1975. Smith was a member of the provincial side that lost narrowly to Australia before a knee injury ended his playing career.

That didn’t stop the Cregane-born man from embarking on a refereeing career that included taking charge of a Scotland versus Wales Five Nations’ encounter and an Argentina versus Australia international in 1997. Smith was also a touch-judge in the 2001 European Cup final before being invited to join the Irish Referee Committee and part of the new coaching structure for referee development.

All that and we haven’t even begun to discuss Smith’s pivotal role in Argideen Rangers’ 2005 intermediate county hurling championship success. Safe to say then that Bertie Smith possesses a unique CV and that the Cork Constitution club man is a perfect fit for his new and challenging role with Munster rugby.

‘I can’t believe it really, it is a huge honour becoming President of the Munster rugby branch and I suppose just a case of being in the right place at the right time,’ commented Smith to The Southern Star.

‘It was my club Cork Constitution’s turn to vote on the incoming President for 2015-16 but the actual process began about three years ago. A couple of fellas within the club approached me about the possibility of going for the position and tried to persuade me to put my name forward over a six to nine-month period.

‘I wasn’t sure initially, to be honest, as I felt there were plenty of other worthy candidates within Cork Con who deserved it more than I did and would have made excellent presidents.

‘After many conversations and plenty of evenings leaning on bar counters discussing the position, I eventually relented. About two years ago I was nominated and became junior vice-president before becoming senior vice-president in 2014. It is a three-year process really where you are moving towards the presidency and I’m there now and as I said, it is a huge honour.’

Clearly, rugby has played a prominent role in Bertie Smith’s life and his new position comes at a transitional time for Munster. Smith is more than aware of the challenges that lie ahead.

‘These are indeed challenging times for everybody associated with Munster rugby,’ admitted the newly-elected President.

‘Modern-day rugby has changed completely over the past number of years in that money has now become the major factor in compiling squads, especially when you look at how often some club owners are opening up their cheque books.

‘Take Toulon in France for example, they are now at the stage where they could field almost field two international teams on any given Saturday afternoon with the amount of quality players they have purchased.

‘It was interesting to note when Toulon played in the European Cup final a couple of months ago that they were only four French players in their starting 15. Obviously, the coaching of those players is important too but if they have the talent it makes the whole process that much easier and success invariably follows.

‘I believe Munster are in a really good place right now. Last year was a big test for Anthony Foley and the coaching team around him but I think they did very well to get to the Guinness PRO12 final.

‘Munster were a bit unfortunate to be drawn in a “group of death” in the European Cup and that home defeat to Clermont Auvergne proved a critical result in the end. A lot of people were pointing the finger the day Munster lost to Saracens but I believe qualification was a long shot after we were beaten in that Clermont game.’

As a former Munster player himself, Smith has many happy memories of his time wearing the famous red jersey, none more so than his debut in November 1975 and a timely word of encouragement from a legend of the province.

‘I think my best personal highlight of my time with Munster was actually my first game and getting my first cap up in Ravenhill against Ulster,’ Smith reminisced.

‘There were fantastic characters in the Munster dressing room at that time like Barry McGann and the great Moss Keane.

‘I will always remember about two minutes before we were due to walk out on to the Ravenhill pitch on the night of my debut and Moss (Keane) pulling me aside. He looked straight at me and said “this is a big day for you so just go out and play the way you have been playing and it will all go well for you”. Moss is no longer with us but was a great character, an institution in Munster rugby and a gentleman.’

Refereeing seemed a natural progression for rugby-mad Bertie Smith once a nagging knee injury put paid to his playing career but it was also a role he aspired to and something that had always interested the Cork Constitution club man.

‘Refereeing was something I always wanted to do and something I pursued when I was coming to the end of my playing career,’ said Smith.

‘I remember being in the crowd at the old Lansdowne Road watching the referees and thinking that was something I would like to do once I’d retired from playing.

‘I always tell people that refereeing has to be something that comes from within you because it can be an incredibly lonely role. It can be something people advise and encourage you to do but unless you really want to do it then it can become a real challenge.

‘With the best will in the world, as a referee, you simply go out on the pitch but are only ever half-right anyway depending on the way your decisions are interpreted.

‘When refereeing, whatever way the game went, there were always decisions that went for you and didn’t go for you but it gave me so many happy memories that I don’t regret a minute of my time officiating.’

A proud Timoleague man, Smith enjoyed a long and fruitful relationship with the Argideen GAA club, culminating in helping the West Cork side claim the 2005 intermediate county hurling championship.

‘My role with Argideen involved being in charge of the players’ fitness and organising all the training sessions with team coach Barry Harte,’ commented the 64-year old.

‘Barry and I certainly worked very well in tandem together it was just a fantastic to be involved that year we won the intermediate title. I was working in Cork at the time but we trained as a squad two or three times a week so Barry and I brought a discipline to the set-up and the players responded. Barry was a fantastic motivator, able to get into the players’ minds and get the best out of individuals.

‘That particular Argideen team had been around for three or four years and there or thereabouts when it came to winning the championship. I think we helped develop their confidence and instilled a winning mentality thanks to innovative SAQ (speed, agility and quickness) training methodologies which I helped introduce at the time.

‘There were no laps of the pitch but quality, focussed, sharp training sessions that helped improve the players’ fitness levels. It was a busy time and a big commitment from everyone involved but wonderful, life-long memories at the end of it. I really enjoyed that period of my life and thoroughly enjoyed that day in 2005 when we beat Nemo.’

Spend a short time in Bertie Smith’s company and it clear he is well spoken, knowledgeable and passionate about his beloved sport. A lifetime dedicated to rugby both as a player and referee means Munster could not have a more appropriate person as President for the coming year.

We’ll give the final word to the Timoleague native following a career that is about to add a new chapter as President of Munster rugby in 2016.

‘To be honest, looking back at it all now, every day I went out on the pitch, be it as a Munster player or referee, was a highlight.’