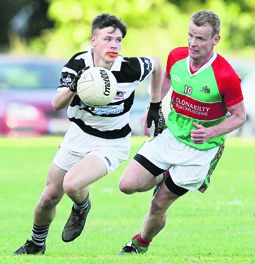 Getting away: St Nick’s Adam Lynch breaks out of defence past Clonakilty’s Donal Lyons during the Cork SFC round three game at Bandon on Saturday evening. (Photo: Paddy Feen)

THE darkest hour is just before the dawn.

But the reality this week is that there is only a thin sliver of light to hang some hope on for Clonakilty GAA Club who are on the verge of becoming the story of the championship summer – for all the wrong reasons.

Last Saturday’s dismal effort against St Nick’s in round three of the Cork SFC means that this proud bastion of the GAA in West Cork is on its knees right now ahead of its first-ever SFC relegation final, against either Clyda Rovers or Aghada.

Clonakilty are staring at premier intermediate football next season, and unless there is a massive turnaround, the nightmare of relegation will become a reality for a club that has won the Cork SFC nine times – that’s more than any other West Cork team – and has been a senior club for the past 84 years.

History counts for nothing in desperate times like this, and after what I saw in Bandon on Saturday night, these count as desperate times for a team that looked, to borrow a Tomás Ó Sé expression, rudderless.

When you are involved in a round-three game against seasoned survival experts like St Nick’s, you have to match their intensity, desire, work-rate and passion. You have to fight for what you want. There wasn’t enough of that on Saturday night. Clon didn’t match the city men in these key departments. In relegation fights, heart is as important as football ability.

Clonakilty weren’t good enough, and that’s a damning indictment on a club that has provided Cork senior, U21 and (four) minor footballers this year.

St Nick’s manager Michael Brosnan offered Clonakilty this advice: ‘Just get the head down, work hard and stick together. It’s that camaraderie and backbone when it gets tough – and it gets very tough at times – that will give you the opportunity to get back into a game and turn it around and win that vital match.’

This is unchartered territory for Clonakilty, they’ve never before been so close to losing their senior status, but unless this management team and players (both are culpable) stand up and be counted now, they will be remembered in Clon GAA for all the wrong reasons – the Clonakilty team that lost the club’s senior status. That brings its own huge pressure.

They have one more chance, the relegation final. That’s the sliver of hope mentioned earlier. All is not lost, and their fate is still in their own hands. But if they get relegated, they have nobody to blame but themselves.

Forget all they have achieved before, their next senior football game will be the club’s biggest-ever in this competition.

Clonakilty need to strip back to bare basics, and they need to find their scoring boots. The defence has been opened up too easily, conceding 3-39 in three games (and Nick’s got in behind the full-back line easily in the opening minutes last Saturday), but Clon just aren’t scoring enough.

To hit 0-25 in three senior championship games is relegation form.

A reporter beside me last Saturday night commented the before throw-in that if Clonakilty scored 0-12 they would win. How right he was, but even he couldn’t account for a toothless Clon attack that kicked some very bad wides, that didn’t move the ball quickly enough from back to front, and that struggled when Nick’s packed bodies behind the ball.

Some of the lowlights from the past three games include scoring one point from play in the opening half against Newcestown, and between the 19th and 59th minutes against St Nick’s, Clon scored one single point – a score from sub Barry O’Mahony. Clon’s total of 0-7 against Nick’s is also the lowest scored by any team in the senior championship this season.

This paltry scoring threat isn’t confined to the championship. Clon prop up Division 1 of the football league with two wins in eight games, and in those eight matches they have amassed only 0-83 in total, and just two goals. They haven’t scored a goal in the championship. That’s two goals in 11 games, between league and championship.

It’s hard to see where the scores will come from too because there are not a lot of natural forwards in their attack.

A lot of responsibility being placed on the younger brigade, those lads coming off the back of three South West U21 A football titles in a row.

Jack O’Mahony looked Clon’s most dangerous player against St Nick’s, and with Jonathan Leahy injured, Ian Falvey and Cork minor David Lowney were summoned from the bench – all talented young players, but it’s the senior players that need to lead this charge to safety. Barry O’Mahony’s not too long out of U21 either.

A handful of the 2009 county-winning team are still involved, and Sean Nagle, Timmy Anglin, Denis Murphy, Donal Lyons and Dave O’Regan need to rally the troops and lift this team off the ground. The same goes for Cork senior Thomas Clancy who, after recent injury troubles, wasn’t 100 per cent against Nick’s.

It’s not too late. One win will prevent the unthinkable, but whatever happens changes need to be made going forward because the current set-up is not working.

Speaking to a few Clonakilty supporters on their way out of Bandon last Saturday night, many were disheartened by what they saw – the lack of quality, the lack of drive, the lack of ideas, the general lack of anything to be optimistic about.

When you hit rock bottom, the only way is up. For Clon’s sake, hopefully rock bottom was Saturday night.

To make it worse, Clon juniors are in a relegation fight for their South West junior A status; when it rains, it pours.