Joan Healy, right, beat her younger sister Phil to win the women's 100m at the 2016 Irish Universities Championships in Santry. Both Heaky sisters ran for UCC.

There’s a long history of running in our family. Our dad’s side would have been known as ‘the reathaí’, that’s Irish for runners. That’s where our speed comes from. Dad actually has a lot of All-Ireland medals in the 100m and 200m from competing at masters’ level; he started running when I was in my mid-teens and he was a regular on the podium. Our mom’s side is where our endurance comes from. Mom had cousins who went to America on scholarships for long-distance running.

Phil has the ideal mixture of endurance and speed – and that’s one of the reasons she’s so fast and strong over 100m, 200m and 400m. I’m primarily made up of fast-twitch muscle fibres, and they help with sudden and more powerful bursts of energy. It’s why, too, that the 60m and 100m are my distances. I don’t go beyond them. Phil has a 50-50 mix of fast-twitch fibres and endurance, and has that aerobic capacity that allows here to reach out from 60m all the way up to 400m, and still be dominant.

But her physical make-up is only one of the reasons that she has achieved all she has, and is now going to become an Olympian. Another reason is Phil’s stubbornness. Well, to be fair, there are strong streaks of stubbornness on both sides of our family and none of us have escaped it. She just won’t give up. Once she has a target – be it in athletics or with her academics or whatever it might be – she won’t stop until she achieves it.

I’ve watched her in some training sessions where she empties the tank, is thrown over a bin and getting sick, and two minutes later she’s back out and starting another long rep. She’s hardy. There’s a steel in her, a determination that she’s always had. That comes from growing up on the farm at home in Knockaneady, Enniskeane.

We had a very country childhood. We were sent out in the morning and we didn’t come back in until we were hungry. We were always outside on the farm and up in the fields, on the tractor, picking stones, picking up hay bales (and making forts when we could), feeding calves, bedding cattle. Phil liked that side of it. She got her hands dirty more than I did. I wanted to play in our timber playhouse in the back garden but Phil wanted to be running around the fields. She just loved to work and that upbringing has stood to her. Still now, Philly – as mom calls her – loves work, but there’s a mischievous side to her, too. 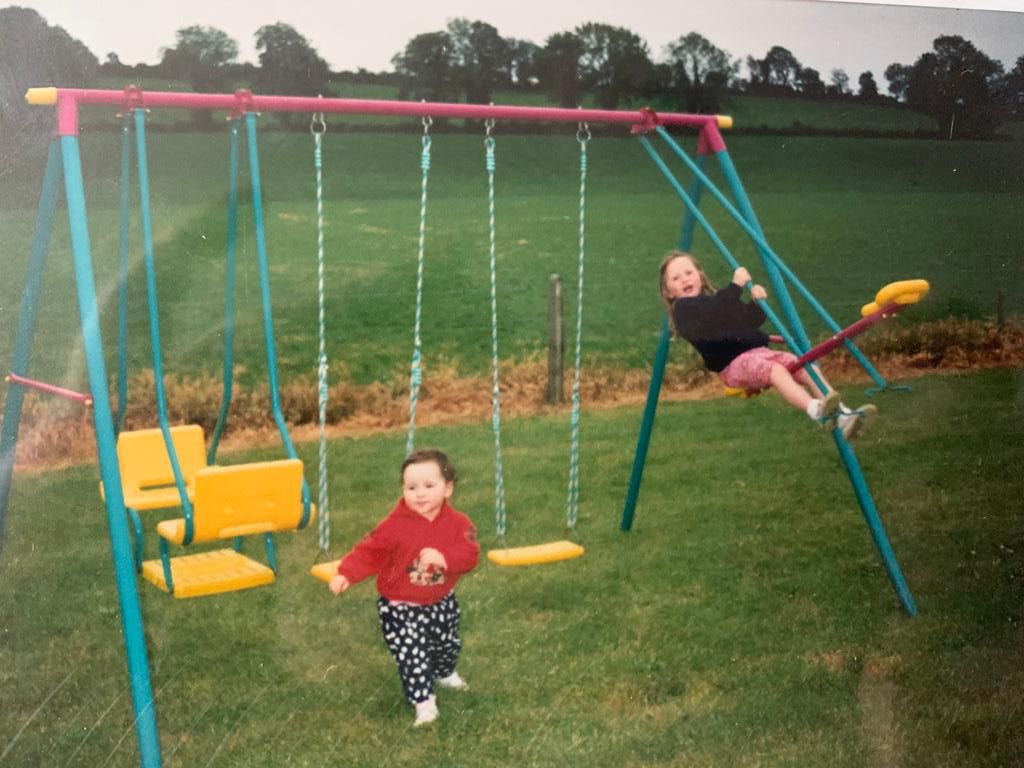 Joan Healy (right) and her younger sister Phil playing out the back of the garden when they were kids.

Phil and myself were always stuck together growing up, always joined at the hip and we were very close in our teenage years, but a small bit of distance did appear then when we starting getting competitive with each other. Neither of us wanting to come off second best. It’s that sibling rivalry.

I started in athletics first and things went well as a junior in the 60m and the 100m. I got to compete at European and World championships, but then injuries started to slow me down. Phil, and she’ll admit this herself, was a slow starter but when she was around 17 and 18 years of age, that’s when I noticed she had something about her. She was making finals, her times was dropping, she was selected on Irish senior teams. When she was 18, Phil won the 100m and 200m double at the 2013 All-Ireland schools’ championships in Tullamore – that was a big moment. Those championships are very competitive and a good barometer to judge where an athlete is at, and she was winning gold.

People outside athletics don’t realise how hard it is to go from being a really successful junior athlete to becoming a successful senior, but Phil took that leap in her stride. A huge part of her story is that she linked up her coach, Shane McCormack, the man with the plan. They work so well together. It’s the dream team. I’ve trained with them and they’ve been a huge help to my sprinting career as well. If Phil and myself were competitive with each other in her late teens, and that’s natural because we’re both competitive and stubborn, we’ve grown very close again in the last few years.

(I have to share this story. In 2016 I was back running after a really bad quad injury and I was competing at the Irish University Championships, as was Phil. It was my first outdoor competition in many years and also my last inter-varsities. We went head to head in the 100m and I won. I couldn’t believe it. I was delighted and was on the way back. Then Phil went on to run that famous leg in the 4x400m relay final for UCC, the ‘from the depths of hell’ run, it went viral and my win was overshadowed! Thanks, Phil!)

I’ve had more than my fair share of injury problems and Phil’s been a huge help, both with her advice and encouragement. I wouldn’t be racing still today without her.

Last year, from September until mid-December, I couldn’t train on the track after I was diagnosed with Plantar fasciitis in my foot. My 2021 season looked in big trouble, but then Phil stepped in.

In April 2019 she broke the fifth metatarsal in her foot on a training camp in Malta ahead of the World University Championships in Naples that summer. She was millimetres away from surgery. This is where we all saw how strong Phil is mentally. Twelve weeks later to the day, she lined out in the 200m final at those championships. That was incredible. The mental energy that took was phenomenal, but that’s Phil. She’s stubborn. Her mind was set on competing at those championships and she got there.

It’s what Phil – and Shane McCormack – learned on that rehab journey that she then shared with me when I had my injury problems last winter. I transferred a lot of my sessions to the watt bike, and her knowledge was huge. It’s the reason I got to the start line at the European Indoor Championships this year.

Phil doesn’t leave me ever feel sorry for myself either. We have this just-get-on-with-it attitude at home, Phil more so than anyone else. I juggle work as a teacher and athletics, but Phil’s not having any of it. Stop complaining, she tells me. Stop making excuses. Yes, you have a full-time job but there are athletes who are raising children at the same time so just get on with it. There’s no filter there and that’s good, the way it should be.

We’re all so proud of what Phil has achieved over the years, it’s been incredible to watch her rise from my little sister jumping off hay bales on the farm to becoming Ireland’s fastest woman and now an Olympian. We’d love to be there in Tokyo with her, but we won’t be. But we will be cheering her from home. Our Philly has reached the pinnacle.