It stopped Scott in her tracks.

She didn’t know Healy on a personal level, but only as a competitor at events when the Ballineen bullet has her game-face on and is about to uncoil from the blocks.

‘She has an aura about her,’ Scott explains, ‘and I was always afraid of her because you just knew that she was going to do well!

‘Before when I saw her name in my race, I’d be thinking, “Ah Phil, why are you here!” because it means the rest of us are proably running for silver.

‘I didn’t know Phil at all, but I was very curious about her – how she trained, what she did, what she was like as a person because there is that gap between her and the rest of us here in Ireland.

‘Phil has run faster than all of us so there is that curiosity to see what makes her so good.’

Healy is also Shane McCormack’s star pupil. Together, they’re the dream team. Together, Healy has become Ireland’s fastest-ever woman, has racked up 12 national senior titles (including three in the past 12 months: 100m outdoor and 200m indoor and outdoor), is the undisputed queen of Irish sprinting and an Olympian in the making. Together, McCormack and Healy works.

A hurdler and sprinter, Scott (21) had been coached by her mom Deirdre Scott before she joined McCormack’s training group in September – and that’s when Healy reached out. Scott soon saw the West Cork woman’s softer side.

‘When Shane told her I was joining the group, she sent me the longest message that I ever received in my entire life! That was such a big deal for me,’ Scott explains.

‘In the past I had approached other groups and spent a certain amount of time in other groups, but I was never truly welcomed in like I was with Phil, and how she reached out to me before I joined up was so nice. Since I’ve come in, I think we’ve developed a quite a good friendship and in training we are definitely bringing each other on.’ 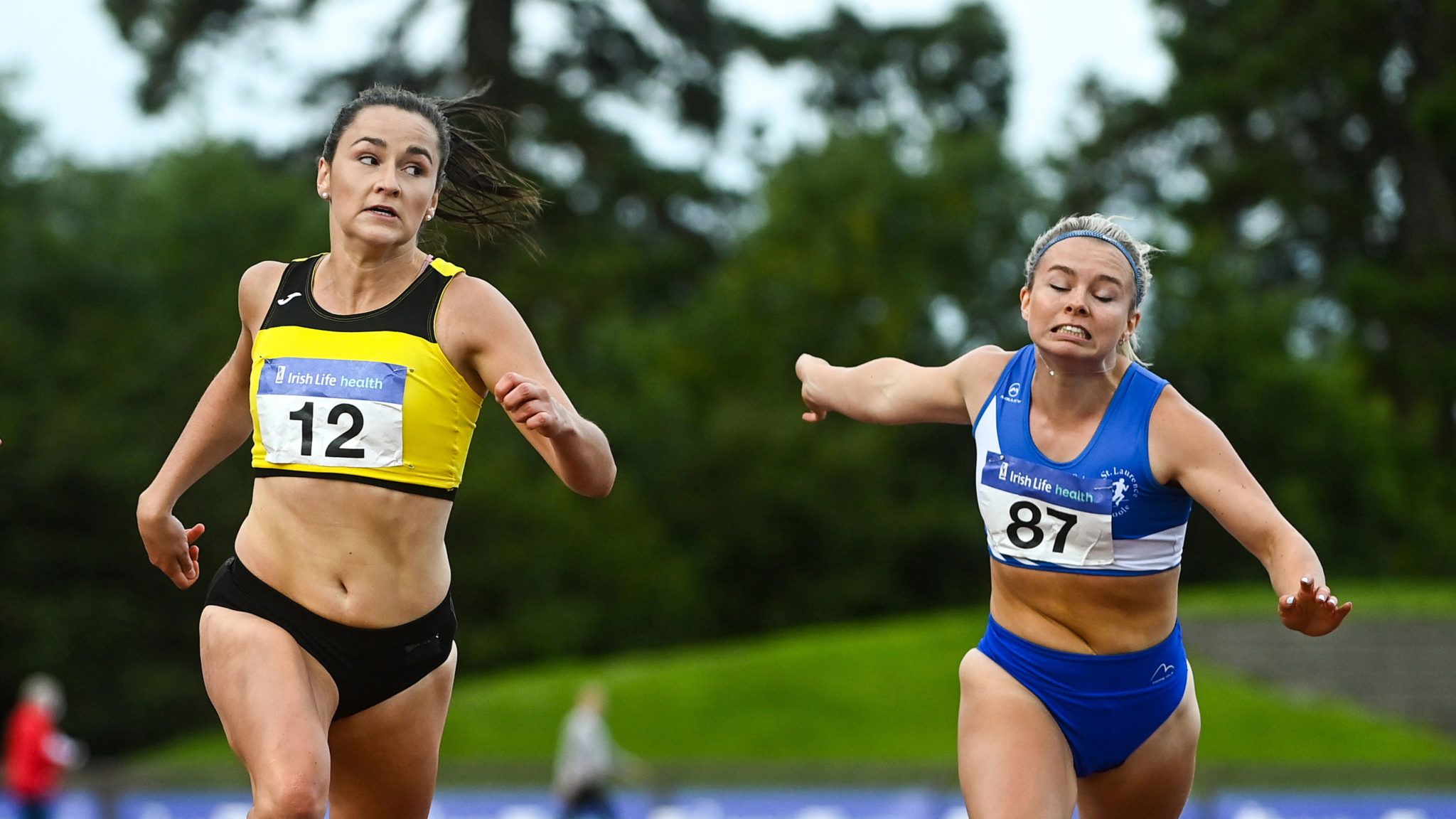 Phil Healy (Bandon AC) finished ahead of Molly Scott to win the women's 100m at the 2020 national athletics championships. Scott has since joined Healy's training group.

Healy has embraced Scott’s arrival in the training group. The addition of another top sprinter will keep Healy on her toes – and ultimately keep her on track for the Olympic Games next summer.

‘I was saying to Shane that there has never been someone in the group at the same level. There might have been people with the same dedication to training but there’s a different mentality when it comes to high-performance training,’ Healy (26) explains.

‘Molly is pushing me on. I can’t be sloppy and I can’t afford to not be at 110 percent so that pushes me on a lot more. It gives you that extra wake-up so you don’t become complacent.

‘It is hard sometimes to have the motivation to go to the track and get 110 per cent out of the session when you are doing them on your own, but having someone there like Molly helps, whether she’s watching or we’re doing the same session.

‘It pushes her on and it pushes me on as well because I have to up my game and improve. It’s perfect timing.’

Healy and Scott live together in the same house in Waterford. It’s Scott’s first time living away from home and Healy is glad to have another female presence in the house because at one stage she was outnumbered by five to one.

‘It’s good to have another woman in the house,’ Healy laughs, and the two are able to bounce questions, thoughts and advice off one another. It’s company, too.

‘Athletics is such a lonely sport and it’s so hard, so it’s nice to have someone there to chat to,’ Scott says.

‘It’s interesting to get to know someone in a different light, and there were times in the beginning when I was thinking, “How am I watching Netflix with Phil Healy! To be honest I don’t think many would have helped me in the same way that she has. When we are in the gym or on the track, she doesn’t hesitate to stand back and help or give her advice. We’ve both talked before about how the sport is so hard so why wouldn’t we help each other.’

Their running sessions don’t cross over too much apart from short speed, but the noises  indicate both are benefitting from the other’s presence. Healy is being kept on her toes as she races into 2021.

Before the coronavirus pandemic hit in early 2020, Healy was on track to qualify in the women’s 200 metres for the Olympic Games in Tokyo. The Games were pushed back into the summer of 2021 but Healy is still in a very strong position to qualify as she’s well inside the women’s 200m top 56 who automatically qualify. She’s ranked 29th currently.

The extra year to prepare for the Olympics has now opened the possibility of Healy also qualifying in the 400 metres. The 200 metres is still her number one, but she’s keeping her options open.

‘The 200 metres will be the focus and maintaining my current position in the rankings. If I can bump my ranking up further with one or two races, I will. I would have qualified in 2020 and I want to make sure I will qualify in 2021,’ she says.

‘The European Indoors are in Poland in March and they’re the target initially, if it goes ahead. I will focus on the 400 metres there. I’ll race the 400 metres more indoors in 2021 whereas last year I focussed on the 200 metres, but I don’t need to do the 200 again as much because I have high (ranking) points now from the races I have done.

‘If we have the possibility of European Indoors, I can take times there in the 400m and I would need three other times outdoor, so we will see how the season plays out.

‘I’m not here now saying I need to go in the 200 and the 400 because we need to see what the year brings, but everything then will be geared for the 200 outdoor for Tokyo.’

With the Olympics pushed back by one year, it means Healy will be one year on in her development and a better version of the athlete that dominated the national scene in 2020. As the 2021 calendar turns its pages, Tokyo will come into sight in the horizon, but Healy won’t allow her mind to drift too far ahead.

‘For me, I am more focussed on week to week, executing there and that will lead to Tokyo,’ she says. ‘Yes, the Olympics are a huge competition but I’m not thinking every morning when I get up that it’s this many days to Tokyo. I will plan and train as I normally do and right now it’s focussing on the indoor season. When I get the indoor season out of the way, the focus will move to the outdoor.

‘I will stay calm, keep focussed on what I need to do from week to week, and not get carried away by an event that is still nine months down the road.’

After smashing the Irish 200m record, Phil Healy shows her class by signing autographs for the kids who were cheering her on all the way. A pure legend!!!@SportTG4 #AITGrandPrix @DervalORourke pic.twitter.com/br1nrBfTDp

It didn’t take Molly Scott long to confirm her thoughts that Healy operates on a different level right now in Ireland to the chasing pack. After joining Shane McCormack’s training group, Scott instantly got to watch Healy behind the scenes in training – and it’s as impressive as she expected.

‘She just gets on with it and she never complains. Whatever she’s asked to do, she does it. She has an incredible work ethic and attitude towards training,’ Scott says.

‘To be honest, we needed someone like Phil to come along and do what she’s done: to raise the bar. She’s shown that it is possible.’

Healy’s 100-metre PB (personal best) is 11.28 (and a national record), while Scott’s is 11.58. That’s the gap that Scott wants to close and she’s hoping her new training environment will make her even faster – but she feels, too, that Healy is going to run even faster in the years ahead. ‘Yes, completely, I definitely do,’ Scott states.

‘It’s like putting together a piece of a puzzle each year. Some years, they don’t always line out, in terms of training, strength, speed and your life in general. Sometimes you are waiting for that one year for it all to come together. Phil is 26 now, and it’s around now – at 26, 27, 28 – that she will peak.

‘I have watched her in training and I think she will definitely go faster.’

Healy herself knows there is more to come. She’s constantly striving to get better and knows what works for her. For example, Healy responds to lifting heavy in the gym, but if her strength drops, everything else drops. That’s not the same with every athlete. Like Scott pointed out, it’s a complex jigsaw and Healy better understands what pieces need to go where, if she wants to stay on the fast track.

‘There are things that we can tweak and refine and hopefully it will be a faster 2021,’ Healy says. ‘In 2020 when I had the record-breaking form indoors I just wanted to transfer that to outdoors. I was running as fast as I ever did indoors and I’d love to see that happen again.’

Molly Scott thinks the best of Phil Healy is yet to come – and hopefully 2021 is the year it all comes together for the Ballineen bullet.