Bandon's Conor Calnan Powers forward against Kanturk's Liam Cashman during the Cork SAHC round one at Coachford on Saturday.

ELIMINATED by Kanturk at the quarter-final stage of the 2020 campaign, Bandon were unable to turn the tables when rivalry was renewed with the Duhallow side in the county senior A hurling championship at Coachford last Saturday.

As the scoreline indicates the West Cork men were well beaten this time despite staging a spirited rally during the third quarter that saw them reduce a six-point interval deficit to the minimum.

Bandon manager Pat Prendergast accepted there could be no quibbling about the justice of the result, stating they were simply outplayed in the closing stages.

‘We fell asleep in the last 15 minutes before half time, so we knew we were up against it, but, credit to the lads, they did their best to get back into it. Having said that, Kanturk finished much stronger, they are a very good team, and they were certainly better than us on the day,’ the Bandon boss acknowledged. 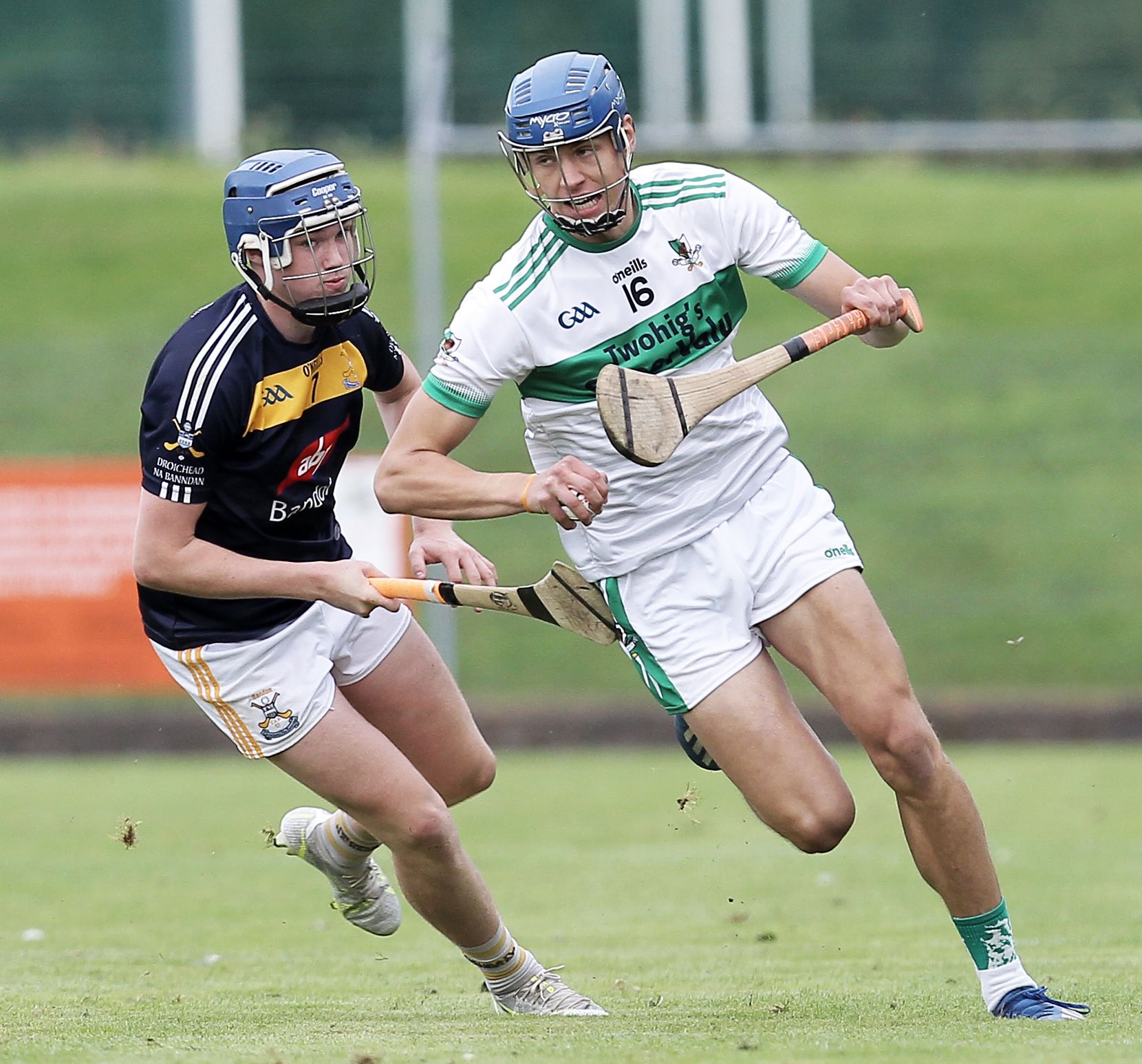 Kanturk's Colm Walsh tries to get past Bandon's Eolann McSweeney during the Cork SAHC round one game at Coachford on Saturday.

Making the point that Bandon enjoyed a good run after losing their championship opener last year, Prendergast is hoping they can make it to the knock-out stages by winning their next two games to secure one of the two qualifying places up for grabs in their group.

‘We have to believe we can pick things up after today, but we have tough games ahead against Fermoy and Blarney, so we’ll definitely need to improve on this performance,’ he admitted.

It was tit-for-tat during the tentative opening exchanges when Adam Murphy, Eoghan McSweeney and Michael Cahalane were on target from play for the Carbery men, who didn’t fall behind until Kanturk’s ace free-taker Brendan O’Sullivan made it 0-5 to 0-4 in the 16th minute.

For the rest of the first half, Kanturk effectively ran the show, dominating in the half-back line to limit the service to Bandon’s key inside attackers Murphy and Cahalane. Turning over 0-10 to 0-4 to the good, it seemed as if Kanturk had laid firm foundations for victory, but Bandon began brightly on the resumption, with another fine point by Adam Murphy cutting the gap to four, 0-11 to 0-7, inside 35 minutes. 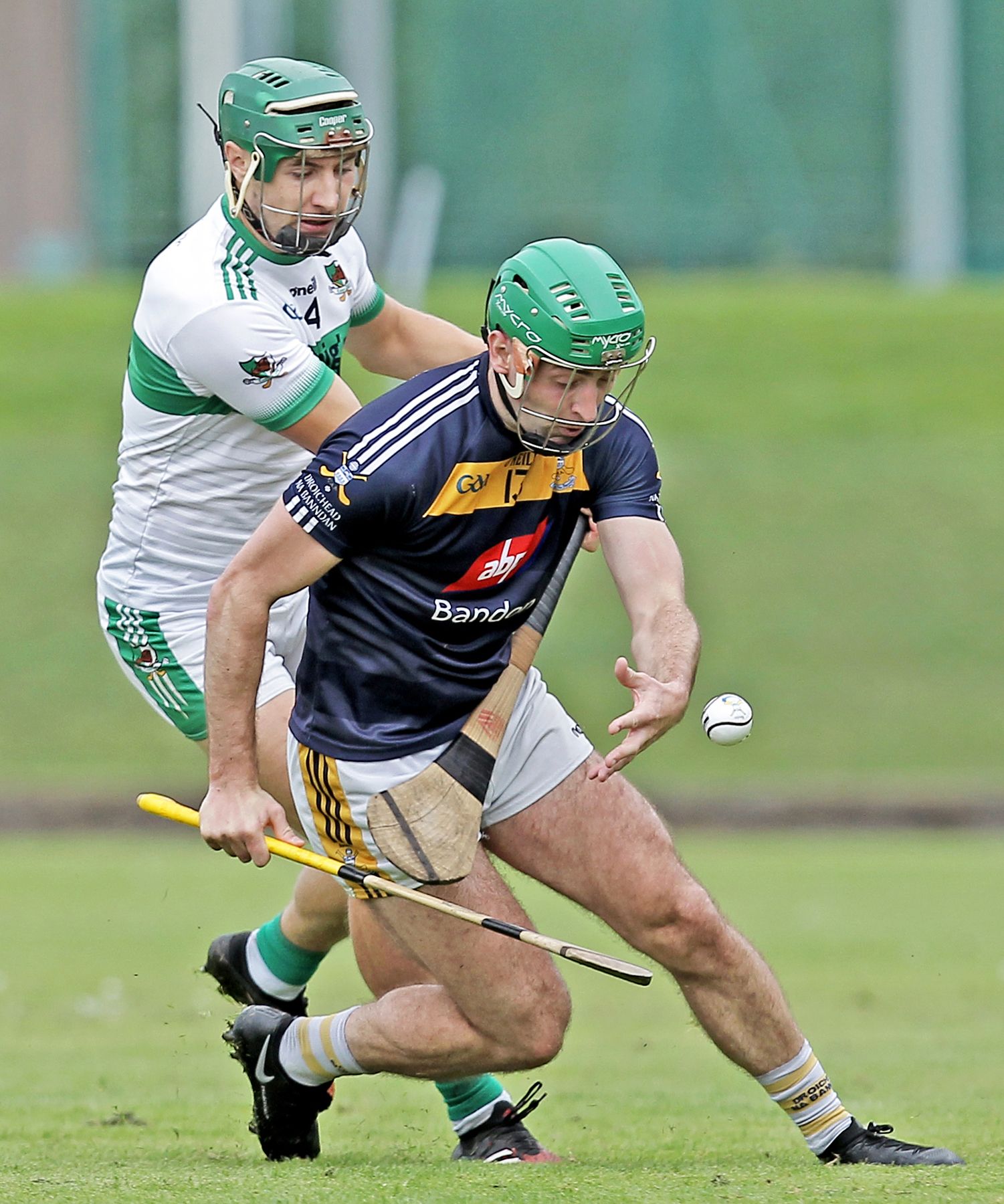 Bandon's Michael Cahalane gets the better of Kanturk's Paul Walsh during the Cork SAHC round one game at Coachford on Saturday.

Although Murphy and Michael Cahalane were kept on a tight rein by their markers over the course of the second half, Bandon continued to make inroads on Kanturk’s advantage for a spell, thanks to the admirable resolve displayed by the team as a unit, most notably perhaps midfielder Joe Harrington and half-backs Robert Long and Eolann McSweeney.

After Harrington and McSweeney combined to set wing-forward Rory Fogarty up for a point in the 40th minute, a converted free by Aidan O’Mahony soon followed to leave Bandon snapping at Kanturk’s heels, 0-12 to 0-11. O’Mahony’s unerring marksmanship from placed balls was Bandon’s main source of penetration in the second-half, and he did the needful again in reply to an Aidan Walsh point for Kanturk, which appeared to set the scene for a nail-biting last-quarter.

It didn’t work out like that, however, as the Duhallow side reasserted their authority in no uncertain manner when the crunch came. After easing into a five-point lead, they removed any lingering doubts about the outcome when full-forward Alan Walsh bagged the game’s only goal in the 55th minute.