Carbery GAA Chairman Aidan O’Rourke is concerned by the lack of referees in the division.

THE Carbery GAA Board had to postpone the opening round of its Division 3 junior hurling league recently. Five games weren’t played. The reason? There were no referees available to officiate the games.

While a few referees were unavoidably unavailable, the shortage of referees, especially hurling referees, is a growing problem for the Carbery Board, a problem that is replicated all over the country at club level.

While the GAA addresses and tackles various issues, including Covid, the split season, declining rural population, growing lack of volunteers, creeping professionalism, the amalgamation of all Gaelic sports organisations, the dispute between the GPA and Croke Park, the ever-changing playing rules, etc., undoubtedly the biggest problem facing the association is the increasing shortage of referees.

To put it bluntly, without referees there cannot be a GAA. Unless drastic action is taken immediately, events like postponing complete rounds of a competition will become commonplace.

New Carbery GAA Chairman Aidan O’Rourke is seriously worried about the situation. A former referee himself, he is meeting the issue head on and is actively promoting the setting up of a referees’ sub-committee to deal with the problem within the division.

‘This has been a growing problem for a number of years in the association and a number of factors have worsened the situation in recent years,’ O’Rourke explained.

‘Firstly, we are more than grateful to the loyal band of referees who have been with us for many years now. However, none of these experienced referees are getting any younger and this aging profile among our referees is very worrying. Unfortunately, these long-serving referees are not being replaced by enough young referees. There is a substantial fee now for refereeing a game but it still doesn’t seem to be attracting young referees. We all know that abuse of referees turns many young lads off the job but GAA boards are now adopting a zero tolerance attitude as regards this abuse. Hopefully, this will see an improvement in numbers.’

‘Another major factor causing the problem is the huge growth of club games in recent decades, especially at underage level,’ explained O’Rourke, the former chairperson of the Rebel Óg in West Cork.

‘The number of games from U8 up to U17 has increased greatly over the past ten years and referees are needed for all these games but the number of referees is actually decreasing instead of increasing. A number of our Carbery referees are also called up for county board refereeing and this is putting an extra burden on the Carbery Board.

‘You must also look at the phenomenal growth in ladies’ GAA games, both football and camogie. It is the same small band of GAA referees who are trying to cover all these games. As the GAA plans to bring these organisations under the one GAA umbrella, they must discuss why there are so few females taking up refereeing at present. Unfortunately, there isn’t a single female referee officiating at adult level under the Carbery Board and this is an area that must be explored.’

‘Here in Carbery every club is expected to supply at least one referee to the adult board,’ added O’Rourke. ‘Unfortunately, that isn’t happening and we have a number of clubs who don’t supply any referees to the board. This can’t be allowed to continue, especially as it is the same clubs who are reneging in this respect every season. Yet, these clubs expect referees to be present to officiate at all their games. The CCC has discussed this problem on numerous occasions and it looks as if some sort of penalty will have to be brought in for these clubs. There is an onus on every club to pull its weight as regards refereeing.

‘One of my main objectives when I came in as chairman was to improve the refereeing situation and I have set up a special sub-committee to investigate ways and means getting more people involved in refereeing, especially past players. There are some very capable people on the sub-committee and, hopefully, they will get the response we need if we are to continue to provide the same number of games in the future as we do at present. It won’t be easy but it must be done.’ 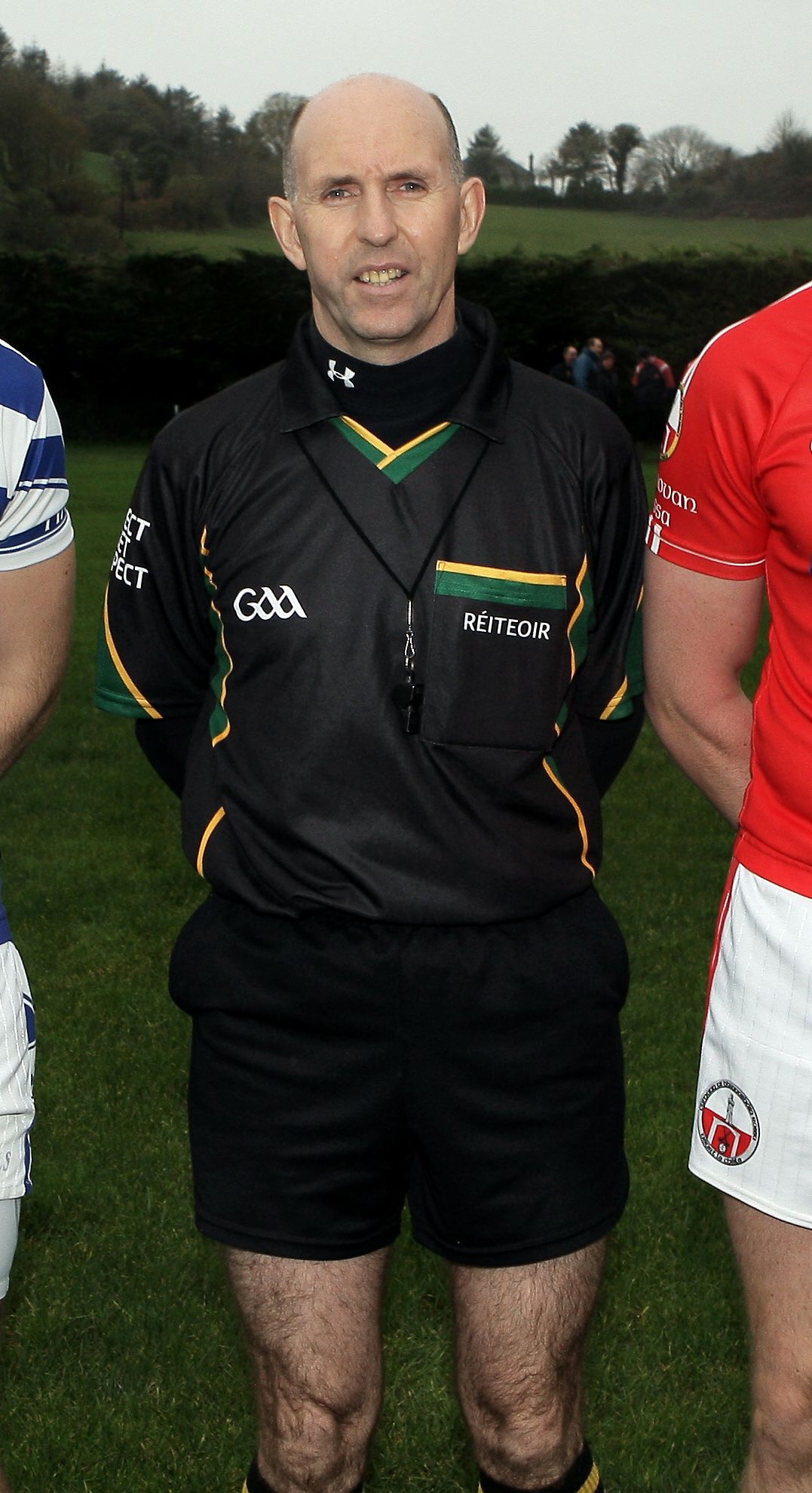 Referee Michael Collins is one of the most experienced refs in the county.

Donal Shorten of St Mary’s is the Referees’ Co-ordinator on the Carbery Board and it is his job not only to advise the CCC on the appointment of referees for championship games, but also to act as liaison officer between the referees’ committee and the board. He is also very involved in the setting up of courses for new referees. A former referee himself, he is fully aware of the present difficulties in procuring referees but he is also optimistic for the future.

‘We ran a course for new referees over the last couple of months and we had 11 lads involved. Eleven of those are from Carbery and three from Beara,’ Shorten said.

‘The course involved two sessions online, two face to face, and an online exam on the rules. Those lads will now begin refereeing underage games this season and maybe graduate to adult next season. We also have appointed a group of assessors, very experienced men, who will keep an eye on the progress of these new referees and advise them along the way. So that is very positive progress. Our own Michael Collins is now one of the instructors involved in these courses and that is a great help.

‘On the negative side, unfortunately, three of our top referees have retired over the past two seasons and we need to hold onto all the experienced referees we have,’ said Shorten.

‘The problem is most acute in hurling and most of the new volunteer referees are from football-only clubs, so the problem is not being solved. A big stumbling block at present is the difficulty referees are now experiencing in getting teams of officials, umpires and linesmen to go with them. There is an onus on clubs to supply these officials for their own referees but many clubs have become very lax in that respect in recent years.

‘All that said, we encourage young lads and retiring players to give refereeing a chance and see how it goes,’ said a hopeful Shorten.

‘It would be nice to have some ladies involved as well. There is a pathway for referees to develop and recently one of our youngest and most active referees, Shane Scanlon of Newcestown, has been called up for inter-county refereeing, which is very encouraging. We wish him the very best and look forward to seeing him in Croke Park some day soon, to follow in the footsteps of Michael Collins of Clonakilty, who refereed an All-Ireland final and is still refereeing here in Carbery.’