DIARMUID O’Connor finished just outside the medals in the men’s decathlon at the European U20 Championships in Tallinn recently – but the Bandon AC club man did set a new national U20 record.

O’Connor, at his brilliant best, set PBs in eight of his ten events as he finished in fourth place, just missing out on a medal, but he did set a new Irish U20 record of 7,604 points that smashed a record that had stood for 36 years.

The previous national record of 7,336 points was held by Barry Walsh, but O’Connor has raised the bar considerably.

The Bandon athlete won’t forget these championships in a hurry as he set PBs in four of his five events on Saturday, including a new high jump PB of 2.00m. O’Connor finished the day in fifth place, but just 49 points off the podium spots.

He crossed the line in 4:31.63 for an overall fourth-place finish and also a new Irish U20 record. Onwards and upwards for this talented Bandon athlete who was one of five West Cork athletes in action at the European U20s in Estonia; four of those athletes are from Bandon AC. 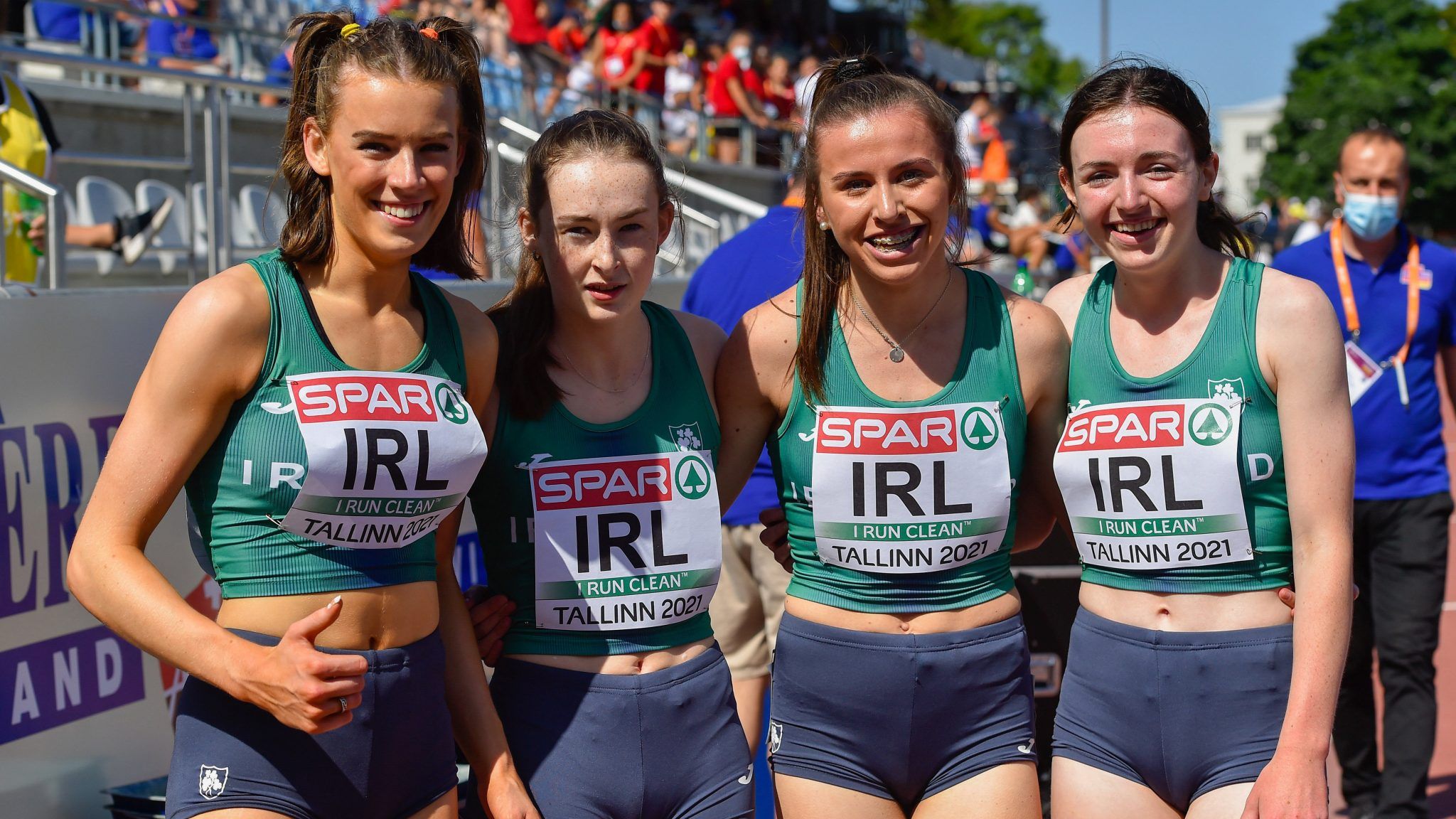 Bandon AC's Lauren McCourt (left) and Doheny AC's Maeve O'Neill (right) were on the Ireland women's 4x400m relay team, along with Kate O'Connell and Caoimhe Cronin, that finished fifth in the final.

Lauren McCourt (Bandon AC) and Maeve O’Neill (Doheny AC) were both in action in individual events, 200m and 800m respectively, but they joined forces on the Ireland women’s 4x400m relay team that finished a brilliant fifth in the final on Sunday and set a new national U20 record of 3.37.39.

McCourt and O’Neill helped the team qualify for the final with a 3:39.80 run in the heats, and then the Irish star at these championships, Rhasidat Adeleke, came into the team for Sunday’s final. McCourt ran the first leg and O’Neill held the baton for the third leg and moved Ireland from eighth to seventh before double gold winner Adeleke took over for the final lap and pushed the team into fifth place as they ran a new Irish record.

In the 200m McCourt ran an excellent 24.23 in the heats, outside her PB of 24.16 set a few weeks ago, but didn’t advance from her heat. Ballinacarriga teen O’Neill, flying the Doheny AC flag, turned on the style in the 800m as she ran a stunning new PB of 2:07.91 in the heats to advance to the semi-finals. There, she finished seventh in 2:10:61 and while not enough to book a spot in the final, she still came home with a new PB and a European final appearance to her name. 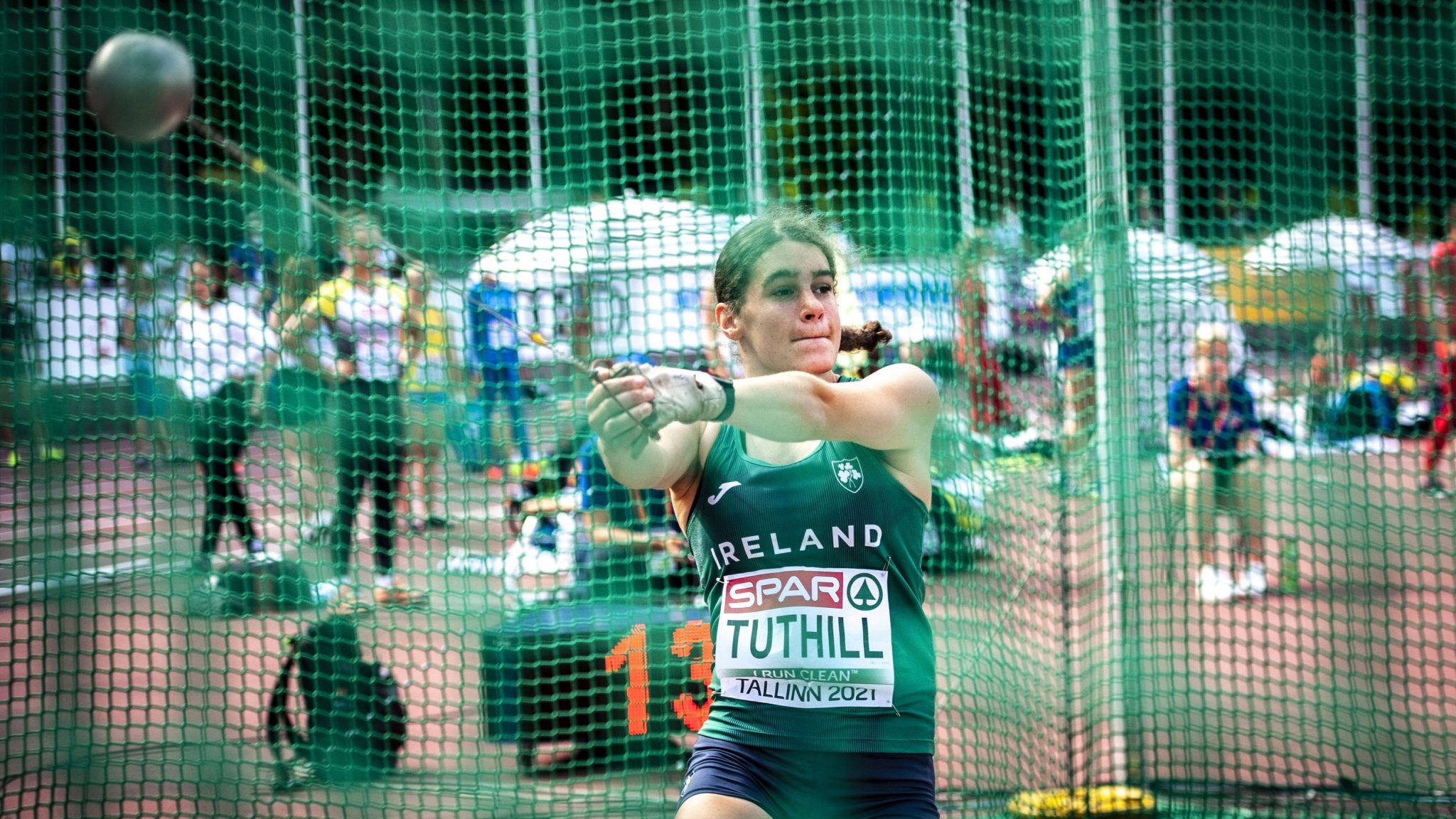 Kilbrittain's Nicola Tuthill in action in the women's hammer at the European U20s.

Elsewhere, Kilbrittain teenager Nicola Tuthill, who set a new PB of 61.55m this season, was in action in the women’s hammer at the European U20s. She threw 54.78m on her first attempt, but then fouled on her next two to finish in 14th place in Group A.

While the Bandon AC star didn’t advance past here, the talented 17-year-old will have learned a lot from these championships and she’ll come back better and stronger.

Also representing Bandon AC in Estonia was Fionn Harrington (18) who competed in the men’s 3000m.

He advanced to the final as one of the fastest qualifiers (8.28.91) from the heats, and in the final he finished 16th overall, in 8:29.71. Again, this will have been a valuable experience for the young Bandon athlete who is flying out to the States next month to start his four-year athletics scholarship with the University of Central Arkansas.

Judging by what we have seen in recent weeks, the future of West Cork athletics