In control: Seamus Sexton won his senior championship contest with Christy Mullins at Lyre on Saturday. 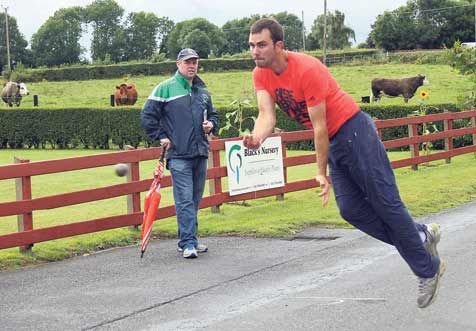 In control: Seamus Sexton won his senior championship contest with Christy Mullins at Lyre on Saturday.

LAST year’s runner-up Christy Mullins is out of the 2015 senior championship after a last-shot defeat to Seamus Sexton at Lyre on Saturday.

The grade’s longest-serving performer gave his all against an opponent several decades his junior but, on a day, when conditions were far from ideal, a few missed chances and a powerful finish by the North Cork man combined to derail his challenge.

Mullins staved off Sexton’s early dominance with a big fourth shot to take his first lead but missed chances subsequently to consolidate his advantage. A poor seventh cost him dearly and Sexton took full advantage to regain the ascendancy.

Although Mullins came again to lead, Sexton’s 11th turned the score very much in favour and he led by over 100 metres after 12.

Mullins rallied with a splendid 14th and after both missed the ‘forge cross’, there was only 30 metres in it. The Bantry man’s next effort never ran, and this time Sexton made no mistake with a superb cast that beat the finish line.

Sexton is now in the last eight draw with Martin Coppinger with the three score quota from Pool D completed. The stake at Lyre was €7,500.

Eamonn Bowen (Jun) rebounded from his Terelton defeat to Brian Wilmot with a big Pool C win over James Buckley at Bottlehill, a result that throws that section wide open.

The 2014 King of the Roads champion was never in the hunt in this one, taking seven to the point known at ‘Dan’s corner’. Bowen, on the other hand, lit the road, his first two covering almost 600 metres, and made this juncture in four leaving the result a formality.

Gone too from this year’s championship is Edmund Sexton after suffering a second defeat, this time to Gary Daly at Whitechurch on bank holiday Monday.

Their Pool A shoot-out carried a €2,800 total stake and it looked like a weekend double for the Nadd brothers when the 2003 champion set a blistering early pace,

almost making the top of the hill in three.

He held the bones of a bowl here on his Fermoy rival but his form fell away and Daly levelled by ‘Bula lane’. Daly went on to rise a bowl of odds by the point known as the ‘devils bend’ and, despite a strong late charge by Sexton, held on to win by almost a bowl.

In intermediate action the final score in Pool C at Rosscarbery on Sunday afternoon involving Donal O’Riordan and Gavin Twohig drew a sizable crowd to the Carbery venue.

It carried a wholesome €8,600 total stake and was an absorbing battle, at least up to the no-play lines at Cahermore cross.

O’Riordan’s early blitz had him a bowl in front just back of the ‘priest’s house’ but Twohig’s splendid sixth wiped that out and gave him his first lead. They matched each other shot for shot in 13 to the lines before the Bantry man unleashed his score winning cast away from the re-start.

Beautifully pitched, it cut both bends past ‘Froe cross’ and left Twohig with an impossible target that he could only pass by metres in two. On the rising stretch towards ‘Harte’s’, O’Riordan made no errors and won by almost the shot.

The upshot of that result is that the Rossmore man plays Sean Murphy in a re-match of their Clubhouse contest to decide the second qualifier from this section.

There was a disappointing outcome to the Nicholas Carey/John Shorten clash at Donoughmore on Friday. With the fortunes of others dependant on the result, Carey conceded to Shorten, an outcome that sees both in the last eight.