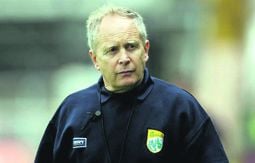 A FORMER All-Ireland winning Kerry captain who works in Cork believes that the Rebels will respond in what he describes as ‘the most important football game for Cork in a long time’.

Mickey Ned O’Sullivan is a teacher at Coláiste Ghobnatán in Ballyvourney and he has played a major role in the schools’ football success over the years. Ahead of a traditional Munster final between his native Kerry and Cork, there’s no hint of divided loyalties – but former Kerry senior manager O’Sullivan has predicted Cork to silence their critics on Sunday.

‘This is probably the most important football game for Cork in a long time,’ O’Sullivan told The Southern Star.

‘We know these players are capable of winning but there is a big question mark over them. They know they have to produce the goods on Sunday, otherwise there will be serious questions about their bottle, their credibility and their confidence.

‘I think they will stand up to it. I think we will have one of the best Munster finals in a long time, partly because when it’s put up to players and when their character is being questioned, that’s when players respond – that’s why Cork will stand up on Sunday. Their whole raison d’etre is in question.

‘The Cork players know that there’s a lot at stake and they will stand up, but whether they have the ability or cuteness to beat Kerry is another thing.’

The general feeling is that All-Ireland and Munster champions Kerry will be too strong for their neighbours this Sunday, and while O’Sullivan does believe Kerry will emerge with their crowns intact, he also feels that Cork can expose the home team’s frailties in defence, if they use the right tactics.

‘Cork are the underdogs but they are like the wounded lion as well,’ he said.

‘Cork are at their best when they are written off, and where they have everything to gain and nothing to lose – that’s the ideal situation to approach any final, especially a Munster final.

‘Kerry, by all accounts, are going well in training. They have a lot of options up front but they may not have that many options in the defence.

‘Cork have to put it together now. The pressure is on. They have fallen at the hurdle in their last three big games when expectations are high. I have no doubt that Cork are good enough, they have a lot of talent, but they must be tactically astute on Sunday. They need to close down the Kerry forwards.

‘When Kerry win possession Cork must close down space. When Cork have possession they must move the ball fast into space. If they do that they have the forwards to punish the Kerry backs.’

Whether Kerry’s 20-year unbeaten championship record against Cork in Killarney will have any bearing on Sunday, O’Sullivan shakes his head.

‘That record is irrelevant. Traditionally Cork always used to play well in Killarney. Cork will have as much support there in Killarney as Kerry will and the big pitch will suit the Cork players, so that record means very little,’ O’Sullivan said.