WHILE it was technically the first of three round-robin games in the Bons Secours Hospital Cork Premier SFC, Castlehaven manager James McCarthy termed his team’s victory over Clonakilty as a ‘knockout’ clash.

In Rosscarbery, this meeting of the competition’s last two beaten finalists went the way of the Haven with a two-point winning margin. Given that the group also features Nemo Rangers – unseeded after failing to reach the knockout stages last year – it’s easy to see why McCarthy felt so much was riding on it.

With the city club having beaten Newcestown on Saturday, it sets things up nicely for the repeat of the county finals of 2013, 2015 and 2020 in Clonakilty in a fortnight.

There is room for improvement between now and then, but the key thing for the Castletownshend/Union Hall side was to get the two points on the board.

‘But, again, we were playing a team that was only a kick of a ball away from winning the county last year. We knew they weren’t going to sit back and take it.

‘We had a brilliant first half, I thought – we controlled the game in the first half. We lost our shape a bit in the second half, we had two or three injuries.

‘But, the main thing here with the first game is always to get the two points and it doesn’t matter how you play, it’s about getting over the line. It’d be easier on my heart alright if we played better, but we’re happy with the two points.

‘Nemo were outstanding on Saturday night, I was watching them. Themselves and the Barrs are the top two, but we’d be thinking that we’re close enough to them.

‘That one is a group game more than a knockout, whereas tonight was effectively knockout. Either ourselves or Clon would have to knock Nemo out of it then, with no disrespect to Newcestown.’ 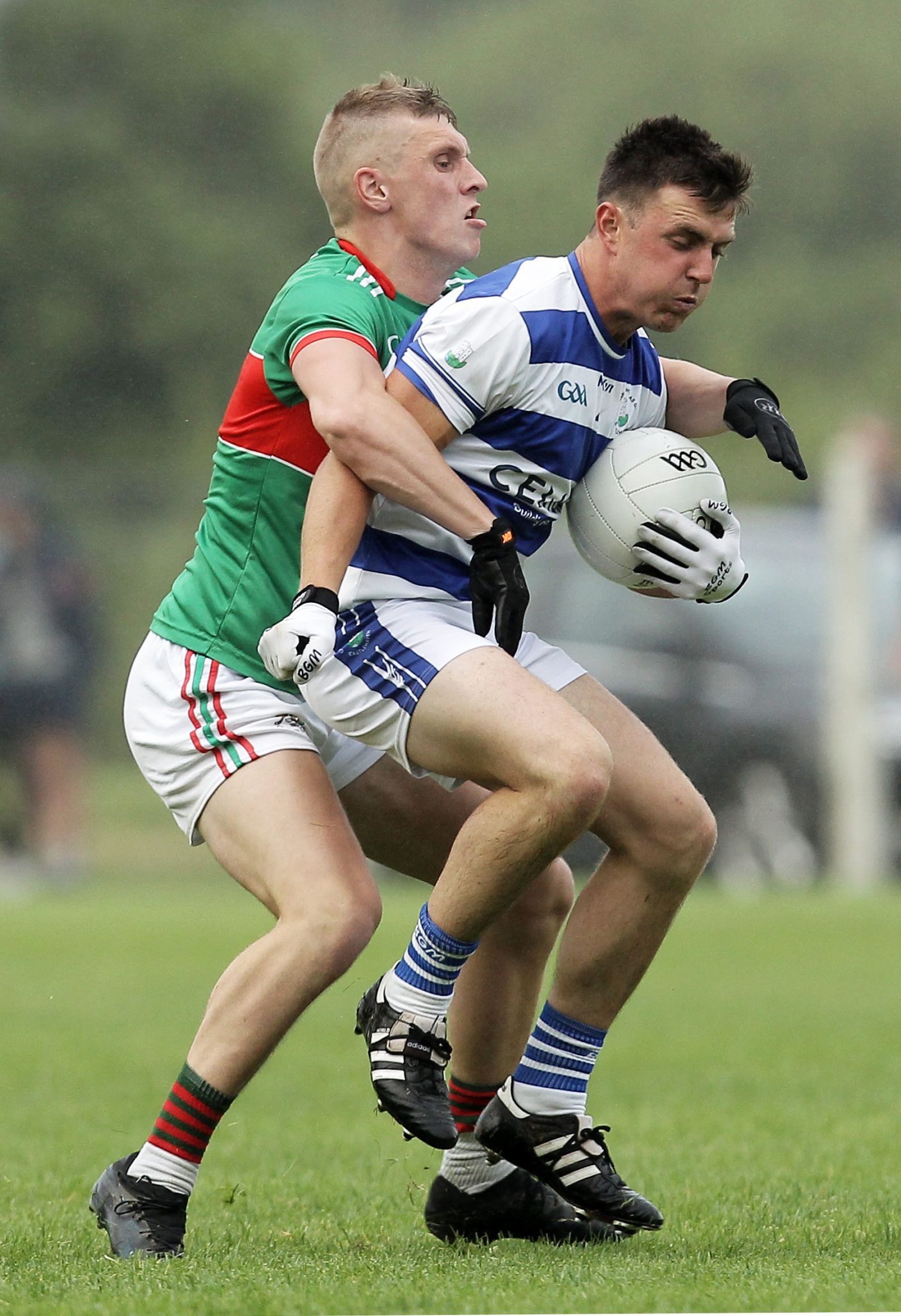 Castlehaven's Sean Walsh is tackled by Clonakilty's Sean White during the Bon Secours Cork PSFC round one at Rosscarbery.

While two Conor Daly points had Clon ahead twice in the opening ten minutes, they suffered for the loss of Dara Ó Sé, who has returned to Kerry, and once the Haven got a handle at midfield through Mark Collins and Conor Cahalane, they began to exert more pressure.

That manifested itself on the scoreboard through points from Brian and Michael Hurley, while wing-back Conor Nolan also raised a white flag when a goal might have capped a neat move.

By and large, the first half – which ended with the Haven 0-7 to 0-2 ahead – was an arm-wrestle, not without niggle: Tom Clancy was detailed to mark Brian Hurley and did well, getting under the Cork captain’s skin with the two picking up yellow cards; Damien Cahalane was also cautioned after a high challenge on Joe Grimes.

A five-point lead in a low-scoring game may have seemed a lot to overcome at the dawn of the second half but Clon had a boost within two minutes of the restart. After a foray forward by goalkeeper Mark White, his brother Seán linked with Daly and Eoghan Deasy, who did well to keep the attack alive by the endline on the right before centring for Seán McEvoy to net from close range. Unfortunately for Clon, they couldn’t close the gap to anything narrower than two points. On 49 minutes, it was 0-8 to 1-3 when Clon went agonisingly close to a second goal.

Mark White stayed forward as a delivery from Grimes – on top at midfield now alongside Ben Ridgeway – was broken down by Ross Mannix and the goalkeeper snaffled possession. However, under strong pressure, his goal attempt was saved by Anthony Seymour and White couldn’t find the target with the resultant 45.

Michael Hurley put the Haven three ahead again, with Clon sub Brian White sending over a free with his first touch before Brian Hurley landed his sixth of the evening. 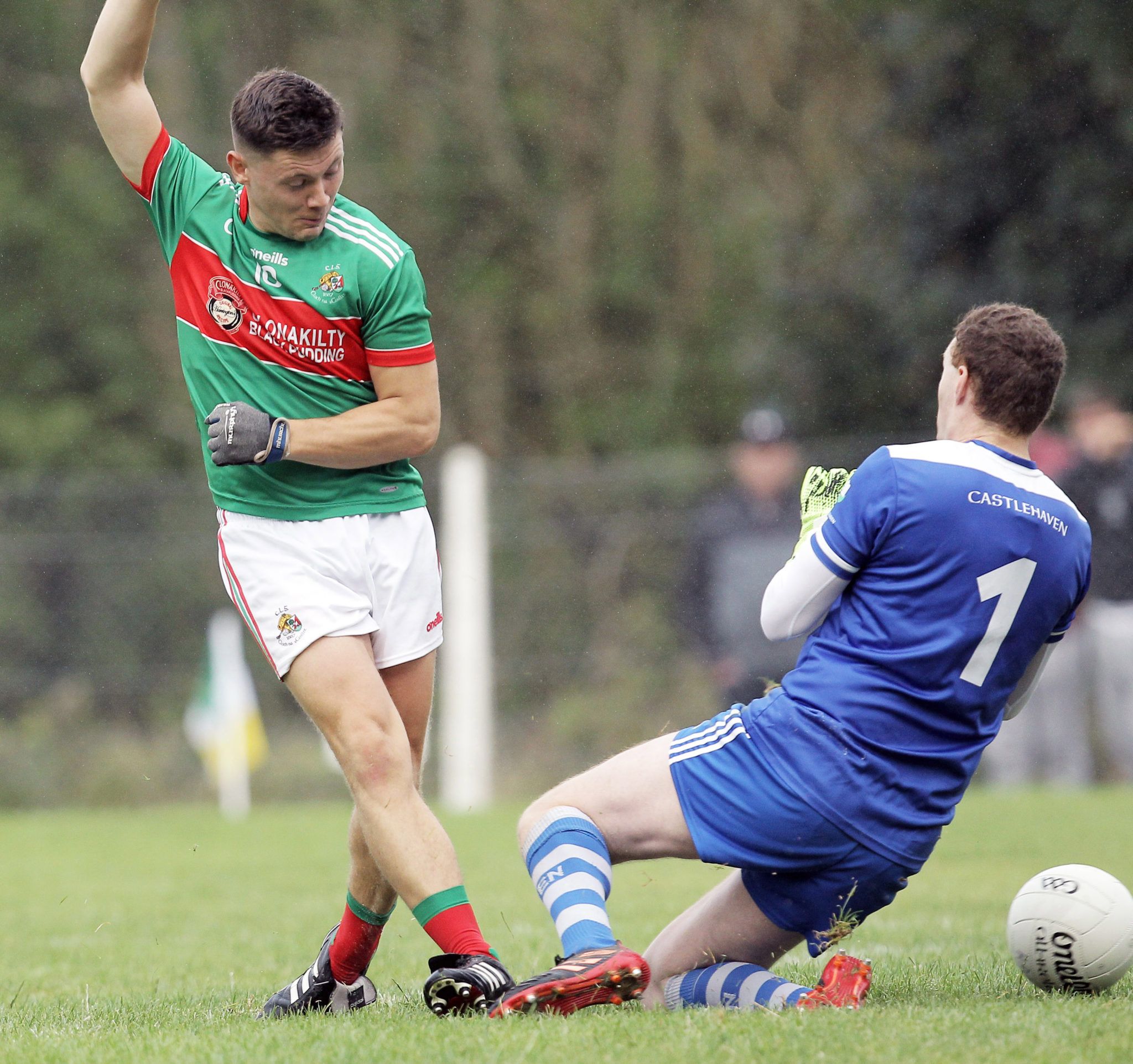 Clonakilty's Sean McEvoy drives the ball past Castlehaven's goalkeeper Anthony Seymour for the only goal of the game in the Bon Secours Cork PSFC game at Rosscarbery.

Joe Grimes cut the lead to two again in injury time but, though Clon did look to force a game-winning goal, they were to be denied as Seymour saved when Grimes got his fist to a Brian White ball in. They must regroup to face Newcestown while the Haven gear up for Nemo, though McCarthy must wait until two rounds of hurling championship to have a full squad to work with again.

‘To be fair, the Cahalanes are absolutely super to train,’ McCarthy said, ‘but we had only played one game with everyone together.

‘After every Cork game, we gave them ten days off – you have to get your mind right and refuel again. They have to be fresh for the summer again and, as well as that, they’re playing with the Barrs.

‘Number one is the player here and I don’t believe in flogging fellas. This is a three-game series, to get out of this is the key and get into the quarter-final.

‘The lads who are hurling go away now, we’ll have them the week before the next match.

‘That’s the way it is, we’re used to that. It’s a brilliant championship – you look at the results from the weekend and it’s clear that the leagues don’t matter, they’re only for getting fellas up to speed.’