DAVID McCarthy knows Castlehaven will face their toughest test yet in this year’s Premier senior football championship on Sunday – but he can’t wait to see how they measure up against St Finbarr’s in their heavyweight semi-final at Páirc Uí Chaoimh (3pm throw-in).

The city men might be slight favourites to advance to the county final, but Castlehaven will always back themselves, and with good reason too.

Last season, these two collided at the same stage of the 2020 Premier SFC and it was the West Cork men that came out on top after an instant classic in Páirc Uí Rinn. Leading 1-11 to 1-10 after six minutes of injury time, Steven Sherlock sent the semi-final into extra-time courtesy of a marvellous side-line effort.

The roles were reversed before the conclusion of the second period of additional time when Mark Collins converted a free to take the tie to a penalty shootout. Then, Collins converted the winning spot-kick in sudden death to end an evening of high drama.

Currently based in Dublin and completing a Masters in Real Estate, Castlehaven defender McCarthy vividly remembers that encounter. He’s expecting a similarly titanic battle in Páirc Uí Chaoimh on Sunday.

‘St Finbarr’s line-up is full of quality players and anyone could have come out of that county semi-final as winners on that particular evening,’ the Castlehaven defender told The Southern Star.

‘Sure, if you want to win top honours then you have to beat the likes of St Finbarr’s and this year is no different. Castlehaven was more than likely going to have to meet the Barr’s again at some stage this year so we are just going to have to put our best foot forward and go for it.

‘That (previous) game feels like a lifetime ago now, especially after the lockdowns came and went. It seems like it was ages ago even though it was October last year. It’s one we won’t forget in a hurry.’

A Covid-delayed 2020 Cork Premier SFC county final didn’t take place until August 29th of this year. Alas, all Castlehaven’s hard work was undone by a disappointing performance that saw Nemo Rangers crowned champions courtesy of a 3-7 to 0-13 victory. So, how much of a motivating factor, if any, has that loss to Nemo been this season?

‘You have to learn from that Nemo Rangers game and then move on, to be honest,’ the 23-year-old stated.

‘You could definitely use it as motivation alright. It was disappointing to fall the final hurdle and lose in Páirc Uí Chaoimh that day. But then you have to park it and take every game that follows as they come. It was a learning curve more than anything else.’

Castlehaven have negotiated a difficult route to the semi-finals of this year’s championship. A battle with West Cork rivals Newcestown, a high-scoring shoot-out with Éire Óg, another intense local derby, this time with Carbery Rangers, and a quarter-final dogfight in atrocious weather conditions with Valley Rovers.

‘All the teams we defeated are hugely competitive, full of talented players and great clubs so, yeah, we have earned our place in the semi-finals,’ McCarthy said.

‘We are lucky to have such a competitive championship in Cork. Nowadays, almost any team you play will give you a game. Castlehaven have come through some tough games but would you want it any other way?

‘The best way to grow as a team is to be tested. That’s how you learn about yourself. Hopefully, those experiences will stand to us when we face the Barr’s.’

When analysing Castlehaven, much of the attention and focus falls on the likes of Cork inter-county players Mark Collins, Damien Cahalane, Brian Hurley and Michael Hurley. Yet, this year, it is the solidity of the Haven’s back seven that has played an equally important role in reaching the penultimate round. Apart from the Éire Óg shootout (2-16 conceded), Castlehaven have held Newcestown to 1-10, Carbery Rangers to 0-11 and Valley Rovers to 0-10 ahead of facing the Barr’s. 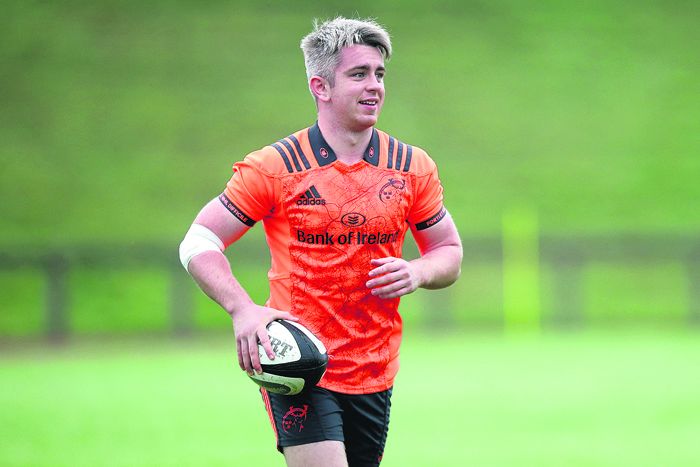 David McCarthy lined out for Ireland in the U20 Six Nations in 2018.

‘People talk about the likes of Brian, Mark, Michael and Damien with good reason,’ said McCarthy, who previously made headlines on the rugby field with Munster, Ireland U20s and Garryowen.

‘They are real quality players and might overshadow our defence at times. We are an attacking team and like to play on the front foot. I would agree that the Castlehaven defence has been holding up well this year and hopefully we can continue that form.

‘As for my own form, I only take things game by game but am pretty happy with the way I have been playing so far this year.

‘Hopefully, I can keep on improving and contributing to the team. We will need a big team performance the next day out against St Finbarr’s.’

Castlehaven possess an experienced manager in James McCarthy who has surrounded himself with an equally knowledgeable backroom team including new Cork senior coach John Cleary and selector Bernie Collins.

‘Each member of our management team brings a positive input into the Castlehaven setup,’ McCarthy said.

‘The management team challenge us and make us better players because of that. They each have their own way of going about things and definitely help us.

‘We are looking forward to facing the Barr’s and having already played (against Valley Rovers) at Páirc Uí Chaoimh in this year’s championship will definitely help us. The playing surface was brilliant even though the weather was fairly deplorable.

‘When the surface is that good, the quality of football improves. We played the Barr’s in Páirc Uí Rinn last year but I’m definitely looking forward to testing myself against them once again only this time at Páirc Uí Chaoimh.’