This was always going to be a competitive tie and it proved to be but Mayo were the better side and deserved to advance.

Two minutes in Mayo took the lead when Sinead Walsh scored as the Connacht side were enjoying the better of the early exchanges. Shauna Howley scored the second point as Cork were finding it difficult to get out of their own half. Mayo kept up the early pressure and Kathryn Sullivan made it 0-3 to 0-0 before Cork got off the mark.

The O’Sullivan sisters combined, with Ciara setting up Doireann to split the posts, before Mayo made it a three-point game again with Howley pointing another free. Tamara O’Connor got in on the scoring act as Mayo kept up the pressure on the Cork kick-outs.

Doireann O’Sullivan scored Cork’s second point, from a free, but Mayo were in control at this stage and got the game’s opening goal in the 10th minute. Ciara Whyte’s pass split the Cork defence as she played Walsh in who found the bottom corner, to make it 1-5 to 0-2. 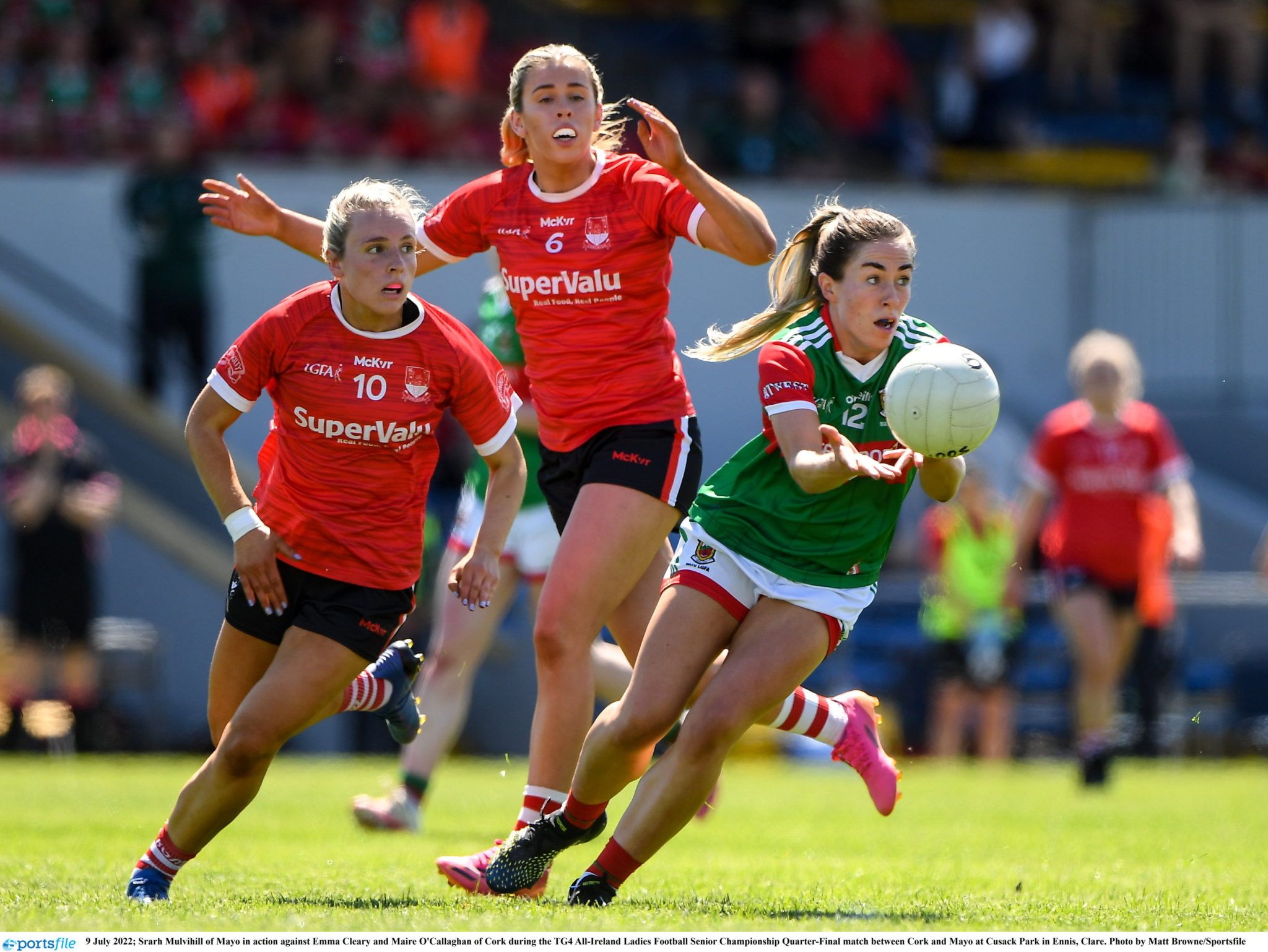 Sarah Mulvihill of Mayo in action against Emma Cleary and Maire O'Callaghan of Cork during the quarter-final at Cusack Park in Ennis, Clare. (Photo: Matt Browne/Sportsfile)

But Cork responded as they began to settle with points from Doireann O’Sullivan and Orla Finn, before they had their first goal chance. A mistake by the Mayo defence saw Emma Cleary pick up the ball but her effort went just over the bar when it could as easily have gone under.

Doireann O’Sullivan got her third as the frantic pace saw Mayo lead 1-6 to 0-6, with 15 minutes gone. Libby Coppinger made it a two-point game, a magnificent point from distance from Doireann O’Sullivan put only one between the sides. Lisa Cafferky replied for Mayo with Melissa Duggan responding to make it 1-7 to 0-9, with five minutes to half-time.

Ciara and Doireann O’Sullivan both pointed for Cork as they led by a point at the break, despite Mayo playing the better football in the first-half as it was 0-11 to 1-7 at the break.

The second-half saw the return of Hannah Looney to the Cork side but it was Finn who increased their lead before Walsh hit the post when she should have scored. Howley replied from a placed ball for Mayo and she had the sides level, from another free in the 36th minute.

Scores from O’Connor and Tara Needham put Mayo back in front before the decisive score came. A mistake from a Cork kick-out saw Lisa Cafferky pick up the ball and slot home to make it 2-12 to 0-13. Cork hit back with points from Doireann and Ciara O’Sullivan to put three between the sides with ten minutes to go, 2-12 to 0-15. Mayo were down to 14 when Ciara Whyte was sin-binned but it mattered little as Sarah Mulvihill rounded off the scoring to see the Connacht side advance.