Paul O'Donovan and Fintan McCarthy will be in direct competition at the national championships.

THE latest evidence that winning an Olympic gold medal won’t change Paul O’Donovan in the slightest was there for all to see at Dublin Airport on Sunday.

O’Donovan, and the rest of Ireland’s Olympic rowing heroes, landed back on home soil on Sunday afternoon.

It was a scaled-back arrival, given restrictions, though there still was time for photos and media interviews, but one of the stars of the show was missing: Paul’s gold medal.

While the Irish women’s four proudly showed off their brilliant bronze medals and Fintan McCarthy clasped his glorious gold tightly, there was no sign of Paul’s prized possession.

Where was his gold Olympic medal? Well, he left it in his bag. This is a man who won’t get carried away by the hype, fanfare and mania. His feet are planted firmly on the ground.

Speaking to the media from the airport, via Zoom, Paul was asked if winning an Olympic gold medal, the pinnacle of the sport, differed in feeling to all the gold and glory he has amassed already.

‘I can’t say I’ve noticed the difference to be honest,’ he replied, matter-of-factly.

‘It’s good in a way to confirm … we’re always trying to be the best we can be. It’s a hope that we’ll beat everyone else, but it’s nice to confirm that.

‘We’d be sitting down with Dominic (Casey, coach), thinking about training plans, how to change this and that, looking at technique and biomechanics, doing testing in the lab and always constantly adjusting stuff. Then to go out and do the test gives a nice confirmation that you’ve done a good job and are on the right track.’ 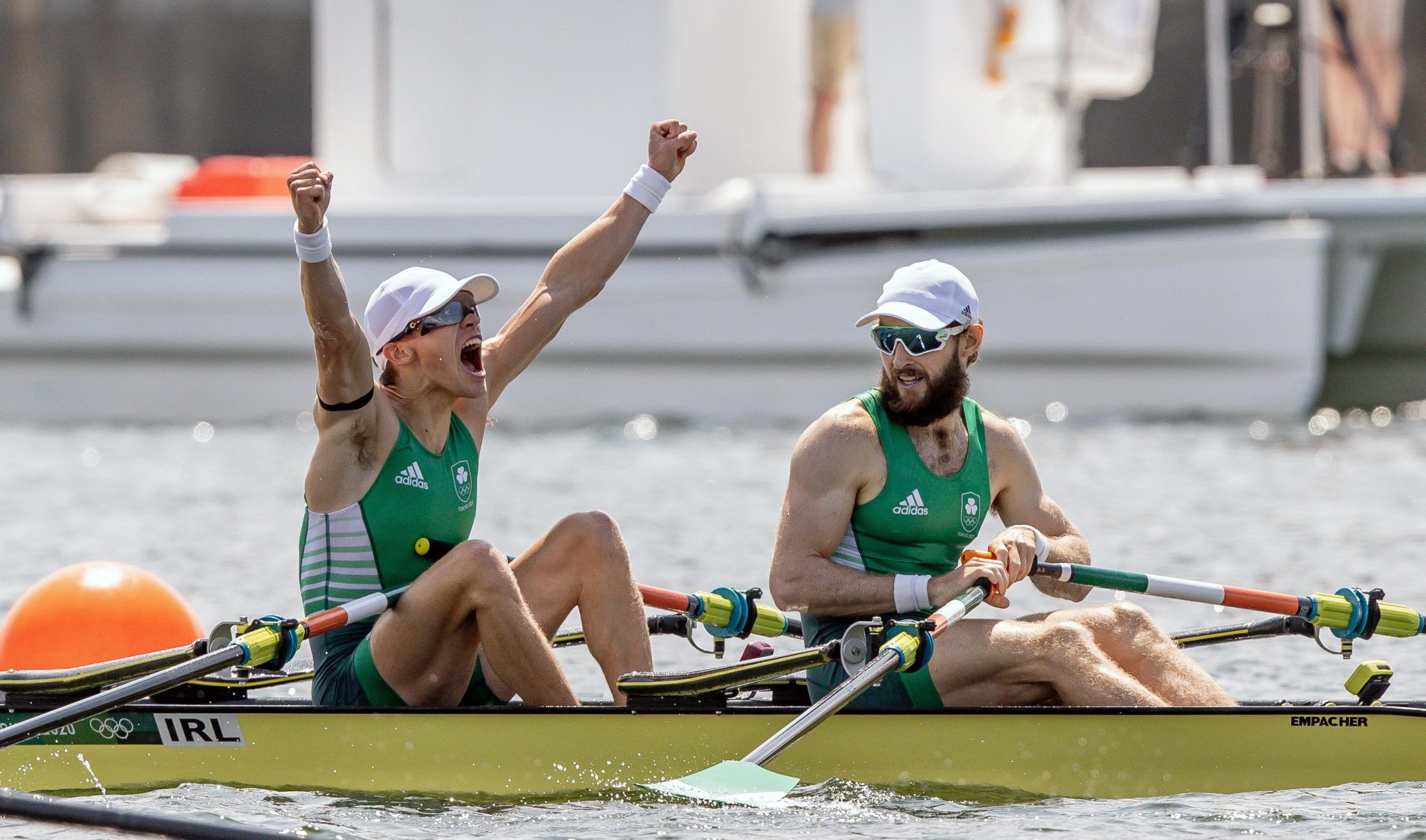 Skibbereen's Fintan McCarthy and Paul O’Donovan celebrate winning gold in the lightweight men's double A final at the Olympics in Tokyo.

The Irish lightweight double is more than ‘on the right track’. This boat is the best in the world right now, as Paul and Fintan snaffle up every gold medal, title and accolade available to them. Reigning World and European champions, now they are Olympic champions. It’s an incredible story for both, especially Fintan who, 19 years old when Paul and Gary O’Donovan won the breakthrough Olympic silver in 2016, watched that Rio final unfold in The Paragon Bar in Skibbereen. Five years later, Fintan’s in the boat that has won Ireland’s first-ever Olympic rowing gold medal. He told the Star before how watching his two club-mates achieve what they did in Rio instilled in him the belief that he could follow in their footsteps – and he has.

‘I feel pretty grateful that I was kind of a part of it back then because the lads are from our club and there was huge excitement around the place,’ Fintan says.

‘It definitely helped me get where I am today, as I saw it was possible and it gave me a lot of motivation to keep going with it. We were doing similar training as we had the same coach, so it was clear it was a winning formula, really.’

These two Skibb men, Paul just 27 years old and Fintan only 24, are the poster-boys for hard work. Their incredible success – like the bronze medal won by the Irish women’s four at the Olympics – is a blueprint for others to follow. Paul, the best lightweight rower in the world, offers his advice.

‘After the last time (Rio 2016), a lot of people realised there’s nothing special about us and a lot of hard work can get you there. Everything is possible,’ Paul says.

‘You have to be quite strategic about it, lay out your plan and your timeline and have a load of intermediate goals and measure your performance increments along the way to see if you’re getting better.

‘Try out a lot of things, and see what is and isn’t working, and listen to a lot of people, then you just have to see what is making you better.

‘It’s a constant learning experience, really, and a bit of an experiment, but you have to be measuring things to get accurate feedback to see how things are going and adjust accordingly. That in itself can be a fun experience, and surrounding yourself with good people always helps, too.’

Fintan, now a World, European and Olympic champion, agrees with Paul’s advice, and adds: ‘We don’t get many opportunities to race, most of what we do is training. So you have to enjoy the training and enjoy the journey. It does take time, so don’t be in any hurry to do amazing things straight away. Keep chipping away and enjoy the journey.’

These two have enjoyed the journey and have the medals to back up their hard work.