DOWN the years many different trophies have been presented for West Cork GAA competitions, some more famous than others.

Depending on the quality, these cups have a definite shelf life before they are decommissioned and set aside due to wear and tear. Sometimes a new cup is presented and replaces the old cup, which is subsequently forgotten about and disappears.

However, these cups form a huge part of the history of the GAA in the Carbery division and when they are lost, part of that history is lost, too.

Without doubt, the most famous cup in the history of the Carbery division was the ‘Little Norah’ Cup, presented for the junior A football championship for almost 50 years, from 1949 to 1997.

It was, undoubtedly, by far the most valuable cup in the board’s possession and also the most sought-after.

Many a hectic battle was fought on the field of play by teams endeavouring to be the lucky one to give it a resting place for the winter. These battles often continued off the pitch, into the boardroom, and led to sporting rivalries becoming bitter feuds.

But all good things come to an end and so it was with ‘Little Norah’. Just a year short of an historic 50 years, the cup was retired, in somewhat tragic circumstances.

By 1997, it was well battered and bruised but still looking highly impressive as it was handed over to Pat Hegarty, captain of the Tadhg MacCárthaigh team that won the championship that season.

Talks were already beginning at executive level on whether it should be withdrawn before the damage became irreparable. The matter was taken out of the hands of the executive when the tragic death of the legendary Skibbereen footballer, ‘Small’ Mick McCarthy, occurred in February, 1998, and the O’Donovan Rossa club presented a silver cup to the board in his memory.

The decision was taken to replace the ‘Little Norah’ with the ‘Mick McCarthy’ Cup, won for the first time in 1998 by Carbery Rangers.

So, who was Little Norah, the most famous lady in West Cork for 50 years?

At a special meeting of the South-West Cork Divisional GAA committee in the Railway Hotel, Dunmanway Sunday, on March 17th, 1949, the chairman, Seán Lomasney of Dohenys, stated that, ‘Mr R. Walsh, on behalf of the Beamish and Crawford Bottling Co Ltd, Bandon, had presented them with a very valuable trophy, a silver cup, for their Junior Football Championship. He wished to propose a vote of thanks to Mr. Walsh and the Company.” Mr B. O'Neill, Enniskeane, seconded the motion which was passed unanimously. Thus did the Little Norah Cup come into the possession of the South West Board. 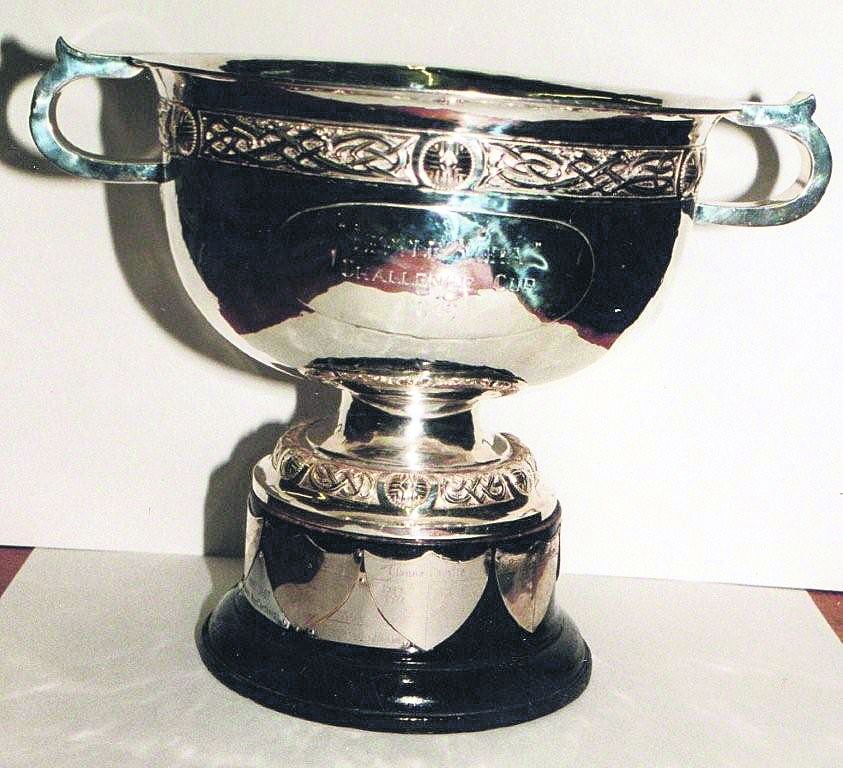 The Beamish and Crawford Bottling Company Ltd, Watergate St, Bandon, was a branch of the main company which had been formed in Cork City in 1792 by Richard Beamish and Arthur Crawford. It soon became one of the largest breweries in Ireland and England. It was said to be the oldest porter brewery in Ireland.

In the 1940s and 1950s, the company ran an advertising campaign which featured a comely Irish maiden, named ‘Little Norah’, whose lovely smile and pretty face was seen on hundreds of billboards all over the country and was also used on the label of lemonade bottles. ‘Little Norah,’ in her red cloak, soon became the most famous colleen in Cork but very few actually knew the real woman behind the picture. She was, in fact, Mary B Hurley of Bantry who was photographed by the famous Cork photographer, Leopold, and presented as the comely Irish colleen. Mary Hurley lived to the age of 79, dying in December 1993.

The advertising campaign proved so successful for the company that when the South West Board sent out an appeal for new trophies in 1949, they decided to present a fine new silver cup, based on the famous Ardagh Chalice, and the cup was named the ‘Little Norah’ Cup.

Strangely, when the name was inscribed on the cup it was spelled wrongly, whether by accident or design we don't know. It appears as ‘Little Nora’ on the cup but was always referred to in the media by its proper name, ‘Little Norah.’

Clonakilty’s second team became the first holders of the new cup in 1949 but when Bandon won it three years in a row, 1950-1952, they were entitled to keep it under rule but generously handed it back to the board as a perpetual trophy.

So fast forward to 1997 when ‘Little Norah’ made her last appearance after years of drama and excitement, and was retired to green pastures. What to do with a retired cup was now the question, especially one that was so valuable and full of history?

There was no GAA museum or Carbery GAA office to store it, so it passed from officer to officer, before eventually being placed in a bank vault. It was brought out of the darkness now and again for team reunions and GAA functions but was always returned to the vault. Or was it?

Of course, the launch of the book required the presence of the silver lady herself, the central character, and we asked the board for permission to use it. No problem there, except one. No cup in the vault. ‘Little Norah’ was gone. Missing. Maybe even kidnapped. Maybe even melted down for the silver; what a gruesome thought.

No luck there, and we were beginning to despair for its safety when we got the idea of using the most-read vehicle in West Cork, The Southern Star, to feature the story and the quest.

Fair play to the sports editor: front page, large picture, full story, the works, nothing spared. And the result was instant.

A phone call from a well-known GAA figure in West Cork. He had the cup. His club had borrowed it for a club dinner and he had taken it home that night. His young lad had taken it up to his bedroom and there it stayed, forgotten if not quite lost. The young lad saw the Star story and photo and told his father the cup he had in his bedroom looked very like that cup.

So ‘Little Norah’ was rescued, the book launched and the cup is now in safe keeping until a proper GAA museum is opened in West Cork.

So, roll on 2022. TG4 had decided to produce a series of programmes about GAA cups all over the country and had somehow got wind of the quest for the ‘Little Norah’ seven years before.

They wanted to feature the cup and the story in the programmes. Queue a whole day in the company of some very professional television people visiting GAA sites around Dunmanway, especially the home of Sam Maguire at Mallabracka and Kilmichael ambush, as they decided to add the story of the ‘Flyer Nyhan’ junior hurling cup as well.

In the pleasant company of Gráinne McElwain, Hannah Ní Dhudhcháin and work mates, ‘Little Norah’ was back in the limelight again, the centre of attention after 25 years in retirement, and looking splendid.

Soon her story was known all over the country as the Scéalta na gCorn programmes were shown on TG4 this summer and she appeared in the very last one.

Whatever happens now to that famous cup, ‘Little Norah’ has been immortalised in print and television. What more could a 73 year old lady ask?