Boys in blue! Kilmeen celebrate their emphatic victory over Grange in the county junior B football championship final at Páirc Uí Rinn. 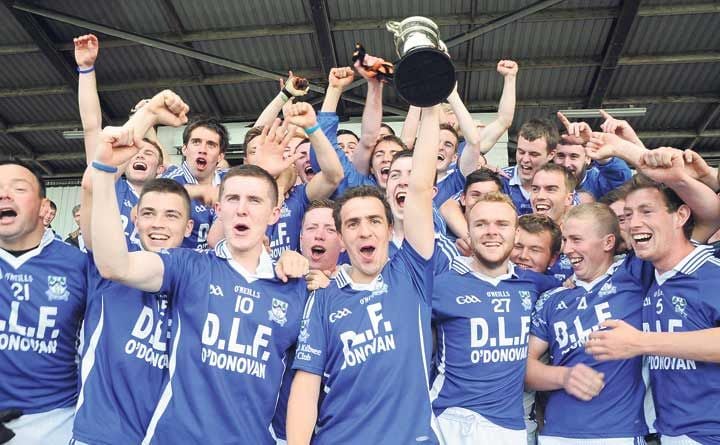 Boys in blue! Kilmeen celebrate their emphatic victory over Grange in the county junior B football championship final at Páirc Uí Rinn.

BEATEN in two of the last three finals, Kilmeen made no mistake in the county junior B football decider at Páirc Uí Rinn last Friday evening, romping to victory over Grange in what amounted to a complete mismatch.

Their winning margin was the biggest ever recorded in a final since the inception of the competition in 1984 (when Kilmeen became the first club to lift the title), and their performance probably surpassed any previously produced in the showpiece game at this level.

It was indeed quality stuff from the West Cork men, who stamped their authority on the proceedings from the throw-in, with their sweet-moving attack showing a facility to carve out the openings virtually at will.

Their first goal arrived inside six minutes when Damien O’Gorman provided a clinical finish, after wing back Ray Collins and Shane O’Donovan had combined to create the opening.

That pushed them 1-2 ahead, and they had put a whopping 3-7 on the board before their hapless opponents finally broke their duck in the 24th minute.

Kilmeen’s second goal was claimed by Shane O’Donovan, with Darragh Coakley and James Clancy involved in the build-up this time, while James Deasy bagged the third, pouncing on the rebound after a shot from Damien O’Gorman had been denied by the crossbar.

By half time, four of the Kilmeen forwards had got on the scoresheet from play, including Darren Santry, who almost got among the goals as well when shooting narrowly over the bar after being put clean through by Brian O’Donovan.

O’Donovan and John Clancy were well on top at midfield, while precious little passed a dominant Kilmeen half-back line in which Ray Collins stood out on the left wing.

With Grange opting to use corner forward Ross Hanrahan as a third midfielder, the unattended Brian Keohane was almost invariably on hand to tidy things up on the few occasions the losers got the ball into the danger zone.

In fairness, full forward David Keating did land a good point for Grange approaching half time, but Brian McSweeney had his measure otherwise.

Up front, Shane O’Donovan pulled most of the strings on the 40, Darren O’Gorman oozed class as well in the right corner, but the input from Darren Santry, Jonathan Deasy, James Clancy and Darragh Coakley, even he didn’t register a score, left nothing to be desired either.

Turning over 3-7 to 0-2 to the good, Kilmeen continued to pile on the pressure and the punishment in the second half, adding another goal, courtesy of Shane O’Donovan, who was on hand to apply the finish after Ray Collins, racing on to a pass from Damien O’Gorman, had rattled the crossbar with a cracking drive in the 38th minute.

Darren Santry later shot narrowly wide with a goal chance and brought the best out of Grange goalkeeper Derek Slattery with another before James Clancy availed of a mistake by Slattery to make it 5-9 to 0-5 at the three-quarter stage.

That came in reply to three points on the trot, shared by Michael and Sean McCarthy (2), for Grange, but Kilmeen put the foot on the pedal again on the run-in, slotting over five unanswered scores, with substitutes Kevin Keohane and the long-serving Davy O’Donovan, who chipped in with a brace, contributing.

Coming in the wake of their defeats at the hands of Diarmuid Ó Mathunas and Castlelyons in the 2012 and 2014 finals respectively, Kilmeen’s triumph, no doubt, tasted extra sweet.

It could hardly be described as a case of third time lucky, however, as there was nothing even remotely fortuitous about this success, achieved with a performance that bordered on perfection.