Taking shape: Castlehaven GAA ground's redevelopment will include the construction of two new dressing-rooms and a gym. 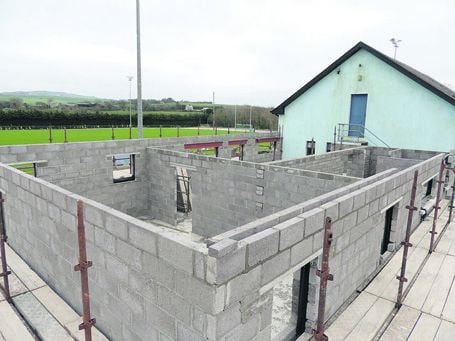 Taking shape: Castlehaven GAA ground’s redevelopment will include the construction of two new dressing-rooms and a gym.

EIGHTEEN months ago, a trip to Killarney to take on Dr Crokes in a Munster Club SFC quarter-final left a lasting impression on Castlehaven, and it will leave a legacy that far outlives the result that day.

For the record, Dr Crokes won that clash 1-11 to 0-8, en route to a Munster title, but what struck Castlehaven was the Killarney club’s set-up in its Lewis Road grounds – in particular its two storey clubhouse and its impressive stand, which has since been seated (with seats from Páirc Uí Chaoimh).

‘We qualified for the Munster club after winning the county and we were drawn against Dr Crokes,’ he said.

‘It was their turn to stage the match and they were able to hold it because they had a stand at their ground. If it was our turn, we’d have to go to either Cork or Clonakilty because we didn’t have those facilities, and a lot of people in our club felt it wasn’t a level playing field. 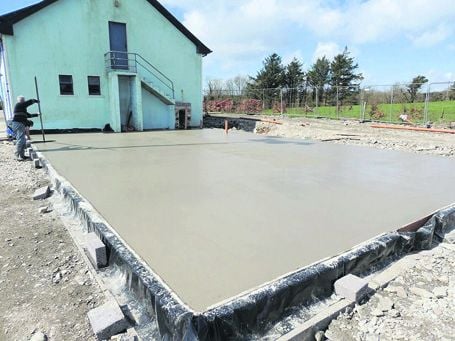 Foundation for success: Castlehaven are looking to safeguard the club’s future with its current redevelopment.

‘Clonakilty have a fantastic set up and we felt that, as a senior club, we should have the best facilities in our club for our members.

‘We looked around Kerry and there seemed to be a lot of stands in club grounds down there, the same in Clare and Tipperary, so we said why not have one more in West Cork.’

The seeds were sown that November Sunday spent in Killarney in 2013, and now Castlehaven has embarked on an ambitious development project in Moneyvollihane that will see the addition of a covered stand – to hold 600 fans – in front of the current clubhouse, which is also receiving a makeover and an extension.

Two more dressing-rooms – one of which can also serve as a meeting room – are being constructed, onto the existing building, while a gym will be added, over the new dressing-rooms, all designed to give Castlehaven teams top-class facilities to train and host matches.

The club already developed an all-weather pitch last year, and this latest development was needed, according to Collins.

‘A few years back we had a meeting and there were different suggestions to what we should do to keep up to speed with other clubs. We had no gym, our dressing rooms are a bit small and we had no all-weather pitch at that time either, but we are on the right track now,’ the chairman said.

The Castlehaven community is pulling together to help this project come fruition. Last week the first blocks of the new dressing-rooms were laid by two of the club’s oldest members, Ned Cleary and James O’Neill, and two of the youngest members, Annie Hurley and Eabha McCaffery.

Collins feels that in addition to various grants from the National Lottery (€141,000) and the Munster Council, the club will have to raise between €70,000 and €100,000 to cover the cost of this project (as well as invest €30,000 of the club’s own funds), which he hopes will be completely finished within a 12-month timeframe