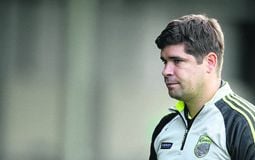 IT didn’t take long for Tomás Ó Sé’s blunt assessment of the Cork football team to become the topic of conversation with Kerry manager Eamonn Fitzmaurice at the pre-Munster final press night.

Ó Sé hit the headlines the previous week when he branded the Rebels ‘rudderless’ in a stinging interview, and while his former teammate Fitzmaurice disagrees with Ó Sé’s opinion, he acknowledges that it will serve as extra motivation for Cork.

‘I imagine Brian Cuthbert was rubbing his hands together in glee when Tomás said it because Cork are very motivated anyway. They’re more motivated considering the amount of bad press they got after the league final even though they had a very good league up to that point, beating all of the famous “big four” that are there, beating Monaghan above in their own backyard. Not too many teams do it.

‘So I imagine the Cork management and players, the management in particular, would have been delighted with it and probably used it. I would imagine the players would be a bit miffed at it.

‘I would see Cork as a very dangerous animal. They’re in the very same situation as we were this time last year. They’re being written off completely. I was thinking about them during the year, they have to be the most maligned bunch in the country full stop, football or hurling.

‘So I imagine in the Cork camp they would have a siege mentality anyway because of the way they’ve been picked at within their own county and outside their own county. I imagine this would have thrown petrol on the flames but, like I said, we’re not foolish to think that or underestimate Cork.

‘If any of our lads need a reminder all they need to do is think back to last March in Páirc Uí Rinn.’

The Kerry manager also feels that Cork are in a ‘very liberating place’ having been written off by the majority, but the Finuge native has come up against the Rebels enough times over the years so he’s walking into Sunday’s game with his eyes wide open.

‘I imagine Cork will throw a couple of different things at us, definitely,’ he mused.

‘I think Cork have gone back to more of their natural running game and if Cork are on top in the middle of the field, like we’ve found it out plenty of times down the years and me as a player myself, it’s a long day out because they’re excellent at that game.

The Kerry manager also dismissed the notion that if you can keep Colm O’Neill and Brian Hurley under wraps that you have Cork beaten. It’s not that easy, Fitzmaurice insists.

‘If you look at their forwards the last day they had Colm O’Driscoll, who’s very effective in his role, and they had Mark Collins, who was one of the best players nationally in the whole league,’ Fitzmaurice said.

‘Paul Kerrigan, when he’s on, he’s like Darran (O’Sullivan), a similar type player. He can get goals, scores, he can cause a lot of hassle.

‘Inside then they have Colm O’Neill, Brian Hurley and Donncha O’Connor, who’s playing fantastic football.

‘Obviously the two lads, Colm O’Neill and Brian Hurley, are kind of their marquee forwards but any one of those forwards, particularly Colm O’Driscoll tends to play out around the middle and works very hard for the team but any one of the other five are big scoring threats and we know that so I don’t think it’s a case of you block out two and you’re safe. We have to be very tight on all of them.’

The return of Alan O’Connor to the Cork midfield has also been well studied across in Kerry. It’s given Fitzmaurice something extra to think about.

‘He definitely gives them something they were probably missing,’ Fitzmaurice said.

‘He’s the type of player that they need. He’s experienced, very effective, very honest, very hard-working so he’s definitely the kind of guy you’d want on your side.’