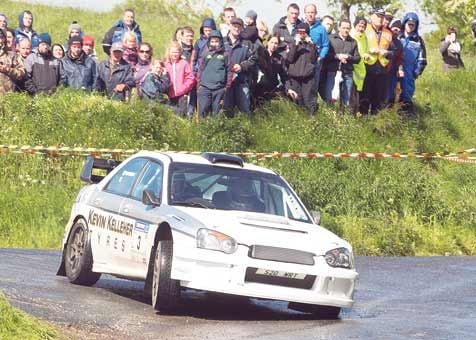 The rally was won by the in-form Donegal driver Donagh Kelly (Ford Focus WRC) and his Derry co-driver Kevin Flanagan, who secured maximum points to bolster their bid to win the Vard Memorial Trophy.

White/O’Brien, despite a spin on the final stage, managed to deny Kevin Kelleher (Subaru WRC) a top-three finish. Afterwards, Kelleher opined: ‘I’m disappointed with the result. For whatever reason I just couldn’t get into it today.

‘I was hoping to be going a lot harder. I lost about a minute on each loop. I just couldn’t make time. We will do the Raven’s Rock at the end of June and take it from there.’

In Group N Aidan Wray (Mitsubishi EvoX) reeled in Pat O’Connell on the final stage to claim the category.

Skibbereen’s Chris O’Donovan (Honda Civic), on his first outing of the season, and his Macroom co-driver Eoghan McCarthy were third in Class 1.

Clonakilty’s Cal McCarthy has been forced to shelve plans to compete in Sunday’s Laois Heartlands Rally in Portlaoise due to business commitments. The event will consist of two stages repeated three times.

Last year’s event winner Ed O’Callaghan (Escort) is the top seed with Frank Kelly, David Condell and Adrian Hetherington, all in Escorts, amongst the opposition.