John Buckley (right), secretary of the West Cork League, presents the Beamish Cup to Johnny Kelly. captain of the Dunmanway Town team that defeated Clonakilty in the Beamish Cup final at Turner's Cross. On left is Tim O'Donovan, chairman.

The 25-year-old has already won the most coveted cup in West Cork League football FOUR times, including a three-in-a-row, and his most recent success was the most dramatic.

He is the Dunmanway Town captain who scored the winning goal two minutes from time when his side beat Clonakilty Soccer Club 2-1 in the final at Turner’s Cross recently.

It was Roy of the Rovers’ stuff.

This was the second season in a row that Dunmanway beat Clonakilty in the Beamish Cup decider at Cork City FC’s home ground. It was also Kelly’s third cup title in three seasons after he helped Togher Celtic win thiscompetition in 2019.

His latest winning goal is one that will live long in the memory.

‘I don’t know how I found myself up there as I was supposed to be playing central midfield,’ Kelly told The Southern Star.

‘Maybe it was instinct but when the ball came through, I only had one thing in my head. I just said to myself: get it on target. Thankfully, my shot got past Eoin Ryan.’

It was an incredible moment and it turned out to be the winning goal. Another Beamish Cup title, this one as captain. It was a seminal moment tinged with sadness as two of the most important people in Kelly’s life were not there to share in the joy. 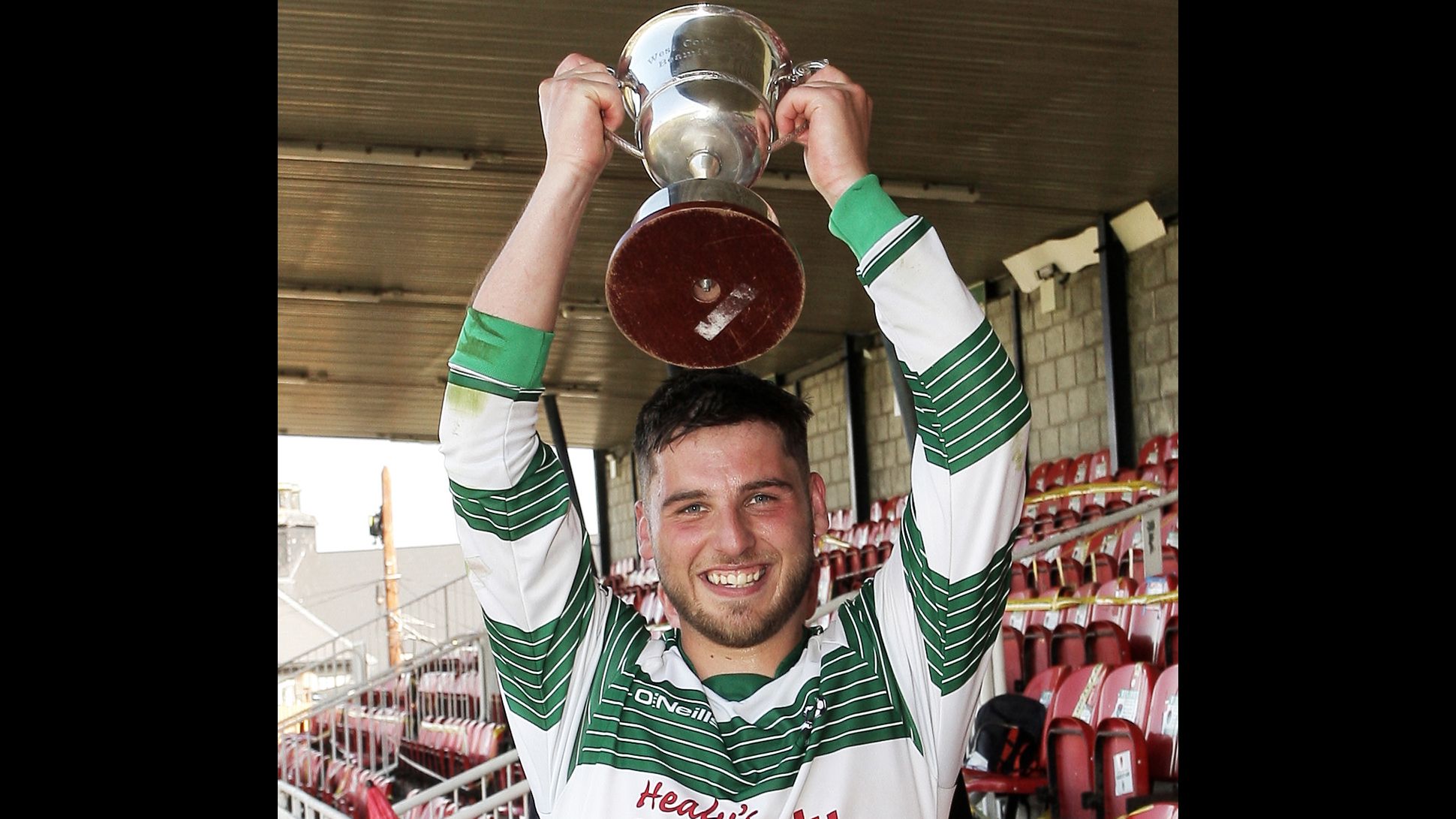 ‘My family were right in line, up in the stand, with my winning goal,’ Kelly explains.

‘Scoring in a cup final is something you dream about so you are in shock when it actually happens. It was one of the best moments of my sporting career so far.

‘I looked up at my aunt and uncle, Ellen and Denis O’Flynn, sister Patricia Daly, niece Ayesha, nephews Austin and Mason, cousins Rachel, Ellie and Megan O’Flynn and my girlfriend Laurie Hayes who all came to Turner’s Cross to support me. I will never forget it.’

Unfortunately, neither of Johnny’s parents saw their son make history at Turner’s Cross. His mother Margaret passed away in 2001 and his father John died in 2010.

Growing up, his older brother Peter was the one who first got him interested in football and his younger brother Mikey was on the Dunmanway subs bench for their recent cup success. Two older sisters, Tracy and Lisa, live in Australia.

Kelly enjoyed a stellar underage football career, highlighted by representing West Cork at the 2010 SFAI Kennedy Cup. Fourteen-years-old, he lived like a professional footballer for a week at the University of Limerick and led West Cork to a Kennedy Trophy final only to come up short to Mayo.

On the domestic front, things were a little more complicated as local rivals Togher Celtic and Dunmanway Town became intertwined in his career. Those clubs would also feature heavily at adult level and involve a much talked-about transfer.

‘I played with Togher Celtic when I was 11 but we moved house from the Togher into Dunmanway around 2007,’ Kelly explained.

‘My uncle was involved with Town at that time, they started up an U12 team so I just started playing for them. I represented Dunmanway through all the grades and went on to win my first (adult) Beamish Cup with them in 2015 when we beat Crookstown.’

Kelly moved to England not long after that cup success and worked there for nine months. It was on his return to West Cork that Togher made contact about the possibility of playing with his old club. He agreed.

‘Johnny Collins and Kevin Hurley were too nice to say no to when I first agreed to sign for Togher,’ Kelly admitted.

‘With Togher and Dunmanway, sure everyone knows each other. We would have played GAA together since we were kids. Winning that 2017 Beamish Cup was special. It was backs to the wall, especially when your goalkeeper gets the Man of the Match award.

‘That was a brilliant day, just like the following two Beamish Cup wins. I will never forget the joy on Sean Crowley and all those other Togher players and supporters faces. That’s what keeps you going as a player. Those moments.’

Kelly was asked to sign for Munster Senior League club Bandon AFC by Richie Holland shortly after the 2019 Beamish Cup final. Unfortunately, the additional travel and extra work commitments meant that particular move didn’t work out. This time it was Dunmanway Town who swopped and secured Kelly’s signature on his return to the WCL.

‘I have good friends on both teams but most of my closer friends play for Dunmanway,’ Kelly said.

‘Look, Togher were disappointed and I spoke to them about it. I didn’t sign for Dunmanway to wind people up. It is what it is and I just got on with it.’

Kelly certainly did get on with it. He was an integral member of Dunmanway’s 2019 WCL Premier League success and in midfield when Town defeated Clonakilty 2-0 in the 2020 Beamish Cup final decider.

‘Like every team, there is plenty giving out and Dunmanway Town is no different,’ Kelly said.

‘You have the likes of Stephen O’Donovan, Barry O’Donovan and Mark Buckley, senior players that have won leagues and cups, have great leadership qualities. They are well able to talk, too!

‘I have to mention Andrew Healy (manager), Conor White and Noel O’Donovan on the side-line as well. Andrew has been my manager from U12 to U18 and at junior level with Dunmanway. We go back a long way. In fairness to him, he does so much for not just soccer in Dunmanway but the town in general. You couldn’t say a bad word about him.

‘As for three-in-a-row Beamish Cup wins? We will certainly be going for it but you will have Drinagh Rangers gunning for us and Clonakilty too amongst plenty others. You know John Mousey Leahy will have Clon ready! I can’t wait.’

Kelly’s West Cork League career is different in that it has involved four Beamish Cup successes with two different clubs – and he’s not finished yet. There’s more to come.