Home comforts: Jamie Wall and his younger brother Philip enjoyed a puckaround at home in Kilbrittain. 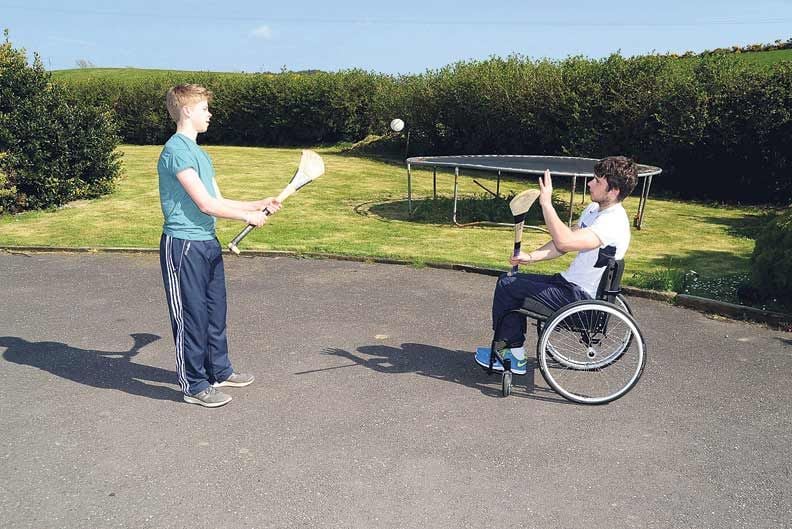 Home comforts: Jamie Wall and his younger brother Philip enjoyed a puckaround at home in Kilbrittain.

THERE are moments where Jamie Wall escapes reality. Like last week.

The sun is shining, warm enough to throw off the jumper – and bright enough for that rarest of Irish accessories, sunglasses – and a smooth blue sky hangs overhead.

Jamie’s out the front at home in Kilbrittain, pucking a sliotar around with his younger brother Philip.

‘He’s alright… He has time yet. We’ll give him a chance,’ laughed Jamie, when quizzed on his young brother’s potential.

Former dual Cork minor and U21 Jamie (23), who has been paralysed from the midriff down after he developed an abscess on his spine last summer, is living life on two paths that run alongside one another.

One path centres around his rehabilitation and his dream of getting out of his wheelchair and walking again; the other path is life itself, and enjoying what it has to offer. That could be driving around in his new white VW Sirrocco car, or watching Game of Thrones (he’s a huge fan), or simply having a puckaround with Philip at home.

‘To be able to return to some semblance of normality, even if it’s just outside pucking around, it’s great mentally,’ Jamie told The Southern Star this week.

‘The possibility of not being able to play with Philip was always going to be one of the harder parts to reconcile with. He’s seven years younger than me so we’d have been waiting until junior or intermediate to play together. It could have been next year.

‘That was always going to be tough mentally, to deal with it. It’s an opportunity that has been put on the long finger.’

Lining out on the same Kilbrittain team as Philip is now a target, one of many, as Jamie is playing the most important match of his life – he is doing everything possible to walk again.

‘Playing alongside him is the stuff of dreams, now more than ever before,’ he agreed.

‘Growing up Philip would always have said to me that he was looking forward to the day where he could play on the same team as his older brother. Now, it gives me the motivation to get to that day too.

‘Whatever capacity it will be in the future, that’s what it will be. If that is trying as hard as I can for a number of years and if it doesn’t work out, I can always look back and say that I gave it one hell of a go.

‘If it works out that I walk with the aid of a crutch or a stick, then that’s an incredible achievement. There is no way of defining what success or failure will be. The only success that I can guarantee is that I will successfully try for as long as is physically and humanly possible to make the ultimate dream a reality.’

Jamie’s story has been well told. The support for him has been astounding. Last Saturday night over 3,000 packed into Páirc Uí Rinn to watch an epic challenge game between Cork and Kilkenny senior hurlers, with all the funds raised going towards The Friends of Jamie Wall Fund.

It was a ‘heart-warming experience’, he says, humbling to see all the support and goodwill that exists for him, and nowhere is that support stronger than at home.

It was in February that Jamie returned home to Kilbrittain after spending four and a half months in the National Rehabilitation Hospital in Dun Laoghaire.

He doesn’t miss the early 7am calls for breakfast. Or the guys snoring all night in a big ward. Mentally, it made a huge difference to be out of hospital and to return to familiar and safe surrounds.

Back home again, with his parents Michael and Sheila and younger siblings Ellen (19) and Katie, the latter a twin with Philip, has aided Jamie no end, on a scale that can’t be measured.

‘It’s hard to put into words. It’s one of these things where they aren’t words there to legislate for it,’ Jamie said.

‘They are the people who are in this with me. There’s almost a co-dependence there and that can help. At times my job is to help my family with what’s happened. By being able to help them helps myself.

‘Initially, there was a feeling that you can’t help the people that you love whereas you could before. But going forward sometimes you help them with what you are going through, and it gives you a feeling of worth – that you can be there for them as much as they have been there for you.

‘The biggest compliment that I can give to my family at home is that nothing has changed. They still call me out when I am being difficult.’

And Jamie admits he can be difficult. He’s human. He has his good moments and bad moments. That’s only natural on the journey he is on as he searches and works towards the breakthrough that will help him walk again.

‘I wouldn’t want the image of me to be portrayed that I am a constantly positive and constantly happy guy because that’s false. It’s not the case. I have good days and bad days,’ he said.

‘Obviously, I am afraid. To my mind, being brave is looking at that fear and saying, okay, I have that, I’ll live with it, and it’s part of me and my life.’

The last few weeks, in the lead-up to last Saturday, were dominated by the challenge match in Páirc Uí Rinn, but while Jamie admits his media interviews are now finished for a while, the hard work continues, and it won’t stop either.

Further trips to Prime Physio in Cambridge are planned, as he avails of their Functional Electrical Stimulation (FES) treatment – ‘it sends electrical stimulation currents through muscle groups’ – he has physio twice a week in Kinsale, plus all the hours he puts in at home.

‘I have a couple of progressive pieces of equipment that I am after purchasing for my gym set-up at home,’ he explained.

‘I will be hoping to get back over to England once or twice before the end of the summer, and then I am hoping to be in a position where I am at the forefront of future developments that you’d imagine will be coming in the next six to 12 months.

‘It’s a better time to be chasing this dream than it would have been five or ten years ago. It is a field that there is a lot of development in and that doctors are targeting to make progress in – that’s all very encouraging that other people are chasing the same dream. I’m not on this quest on my own.

‘By putting myself into the best physical and rehab condition possible I’m maximising my opportunity to avail of whatever comes down the line.’

He added: ‘Going forward that FES could well have a big part to play in the end game. After my last trip over there I thought it was of paramount importance to invest in my own FES system. That’s what I have done. That’s been the most exciting purchase for me from the fundraising.’

There is more to Jamie Wall than what we have all read in the newspapers. No one element defines him.

‘I’m at pains to be honest with people. There is no benefit in me lying to people and telling people that I am totally optimistic and that I’m great. That’s a lie. It’s not honest. If nothing else I want people to see that I am honest,’ Jamie said.

‘Am I optimistic? I am equal parts both optimistic and pessimistic. The word I prefer to use is pragmatic. I have my aim but I am not ignorant to the reality either, or the difficulties that are ahead of me.’