Darragh McElhinney on his way to winning the senior men's 10,000m during the 123.ie Senior and Even Age Cross County Championships at Rosapenna Golf Course in Donegal.(Photo: Ben McShane/Sportsfile)

DARRAGH McElhinney’s fan club swelled even more with his latest triumph, including the addition of Donegal cousins he had never seen before.

Rosapenna in north Donegal is a long way from home in Glengarriff – the shortest route is 520 kilometres, a seven-hour drive – but Darragh’s clan have a connection with the area.

For the recent national cross-country championships, he stayed at his cousins’ holiday home in Dunfanaghy, just a 30-minute drive from the course where Darragh produced yet more McElhinney magic on Sunday afternoon.

With two senior Irish titles in 2022 – indoor 3000m and outdoor 5000m – added to his already-bulging collection, the 22-year-old made it a memorable hat-trick when, with ruthless efficiency, he won his first senior men’s national cross-country crown.

There was a homecoming feel to this success, as family and cousins celebrated Darragh’s latest heroics. And then there were the Donegal cousins he never knew he had, but all are welcome to the growing McElhinney Fan Club.

‘It was funny, McElhinneys from Ballybofey turned up at the race and reckoned they were our cousins, but I had never seen them before!’ Darragh told The Southern Star.

‘My dad or my other cousins hadn’t seen them before either, but they were our cousins for the day anyway. I’m not sure if they are still our cousins, but I presume they are!’

‘I wasn't aware we have cousins up that direction, but obviously we do!’

The more, the merrier, as Darragh’s army of fans and supporters, much like his medal haul, continues to grow, and his latest golden performance was a mature showing beyond his 22 years.

He checked out the course at Rosapenna golf course on Saturday, the day before the race, and knew the last hill would be key.

‘I knew if I wanted to win I had to be the strongest going up the last hill,’ he reflected, and he was more than a match for the famed hills of Donegal. 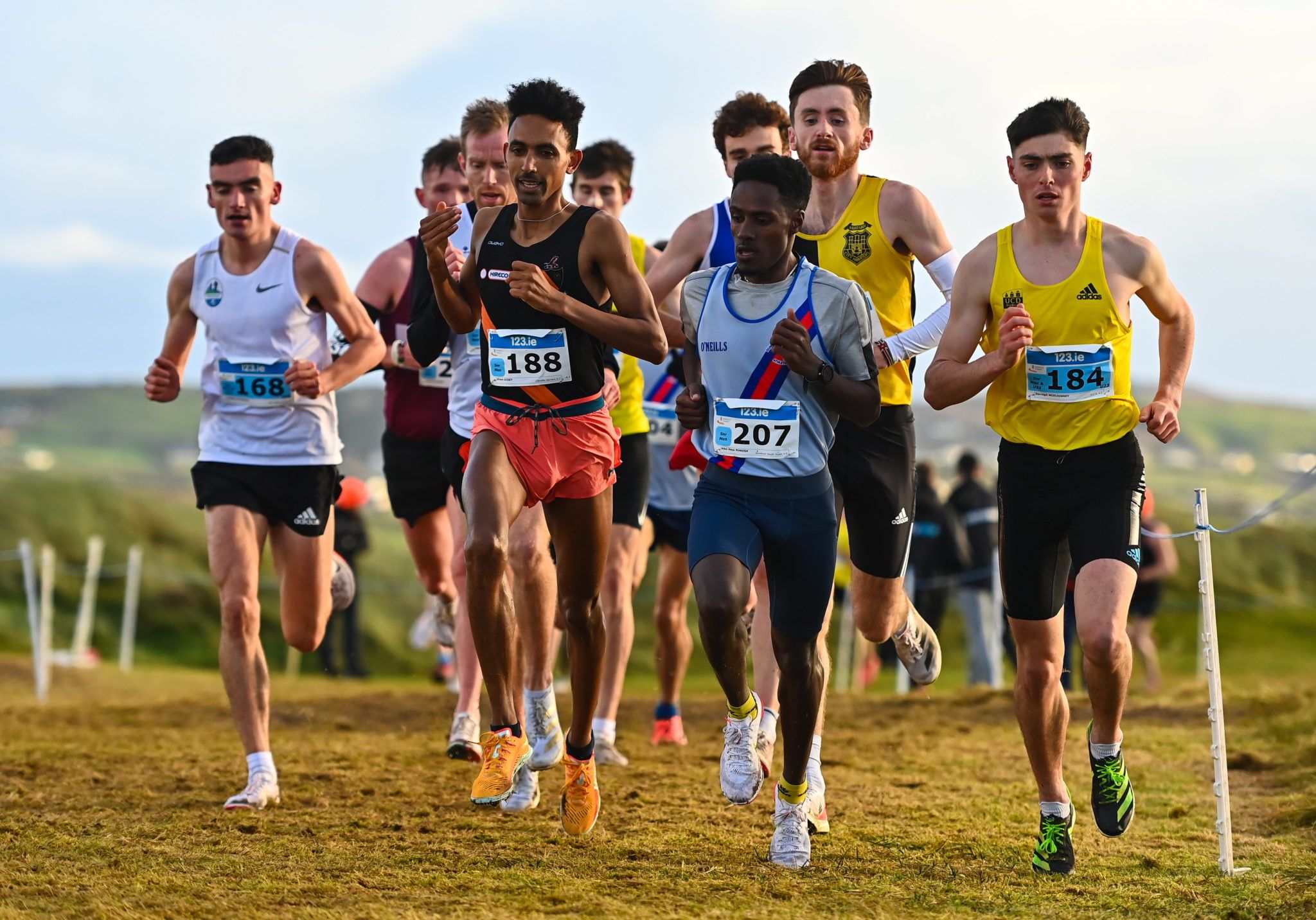 He went one step further than last year when he finished second in the senior men’s cross-country, while winning the U23 Irish title.

In a rerun of 2021, the men’s race came down to a battle between the experienced defending champion Hiko Tonosa Haso and an in-form Darragh, running in his yellow UCD AC colours.

‘It was a good performance, and the race did play into my hands a little as well, and that helped,’ said Darragh, as he analysed where he won this latest senior title, in 29:99, and with four seconds of breathing room ahead of Haso (30:03).

‘It was fairly pedestrian early on, there were a couple of surges thrown in, the second lap was tough when John Travers went to the front and he drove it on.

‘I only averaged three-minute kilometres for the whole race, and that’s not quick. My game-plan beforehand was to be at the front, just sit and kick. The longer the race went on without it being difficult, the better it was for me. I was thinking that nobody is doing something to shake up the race; there were a few small efforts, but none were sustained.

‘Once it got to three or four kilometres to go, I felt I was in a good position. Hiko’s move then with 600 or 700 metres to go was very aggressive, and I had to match it. Once I caught him and went by him – and it’s something you’d realise after the race – it was very hard for him to mount another attack.

‘Having that hill at the very end suited me as well because I am strong on hills, and by the time I got down to the bottom of the hill the race was won. It was a good performance, but I only had to perform for 300 or 400 metres, and the rest was at a relaxed pace.’

Also defending his national U23 title, he maintains his momentum ahead of the European Cross-Country Championships in Turin, Italy on December 11th. Last year Darragh won a European U23 silver medal and led the Irish U23 men’s team to gold, and he will set his sights high again.

‘The Autumn Open, the inter-varsity relays and the cross-country have all been good, and I feel very good too so there is no reason why it wouldn't go well in Italy,’ Darragh said.

‘It will be tough. Charles Hicks, who beat me last year, won the American collegiate race over the weekend, and that is huge. He will be running at U23 as well so it’s going to be a dog-fight, and will be really hard.

‘We have a savage U23 team. Myself and Keelan Kilrehill are both underage from last year, Efrem Gidey is coming into the team, so we have a very strong team, and I have hopes in the individual as well. If I was to win it, and win the team as well, it would be a dream come true, and my greatest achievement.’

The McElhinney Express now rolls on to Italy, fuelled by his latest medal success, and with a few more passengers on board.