Cork line up at the start of their All-Ireland SFC quarter-final against Dublin at Croke Park.

I ALWAYS find the tactical battle fascinating prior to these big games at Croke Park.

Cork manager John Cleary and his team got a lot right in their recent All-Ireland SFC quarter-final against Dublin, but again, as in the Kerry game at Páirc Uí Rinn in the Munster semi-final, when the heat got turned up by a higher quality outfit the Rebels were found wanting.

Stopping Dublin scoring goals was always going to be an integral part of Cork staying in this quarter-final. A central part to that jigsaw was going to be how the Cork management freed up Sean Powter to fulfil his now customary sweeping role. With such a talented forward line full of scoring threats there was no Dublin player you could identify and say “yeah, we can let him off to get picked up by a retreating midfielder or half forward”. So Daniel Dineen was sacrificed at wing forward in favour of Paul Ring, who reverted to his normal cornerback position, freeing Powter to fulfil his role.

The diminutive Douglas man, as in previous games, was one of the Rebels’ top performers, covering, doubling up, cutting out passes and driving Cork forward on the resulting turnovers. The downside was this move freed up Johnny Cooper on the Dublin side and the experienced Dublin defender ran the show from his end.

It has been well documented that the Cork backline lacks physicality. This was apparent throughout, particularly in the third quarter when smaller-bodied Cork defenders were guilty of fouling more physical Dublin attackers, leading to Dean Rock converting three frees in a row, doubling the half-time lead of three points to six. Game over.

The match-ups were interesting. Mattie Taylor picked up Ciarán Kilkenny and Colm O’Callaghan was on Brian Fenton, freeing Ian Maguire as a target for Micheál Martin from the Cork kickout. Taylor struggled with Kilkenny’s movement, physicality and awareness – but tell me who hasn’t in recent years. The Dublin star kicked three from play.

Dublin, as expected, identified Cork’s favouring of the short kickout so pushed four, sometimes five, players in to shut down the channels. Martin ended up going long, targeting Maguire’s match-up with Tom Lahiff as the get-out avenue. It was obvious that a lot of time and practice had been put into the long kickout in the intervening weeks as Cork won ten of 17 during the game.

Examples were Maguire’s tap down to John O’Rourke after 12 minutes and another long kickout won after 15 minutes led to a great Brian Hurley point to leave the score at 0-4 to 0-2 in Dublin’s favour. It’s a pity we didn’t see more of this earlier in the season as it resulted in Cork being far more direct in their play, leading to the likes of Hurley and Steven Sherlock getting into one-on-one situations. 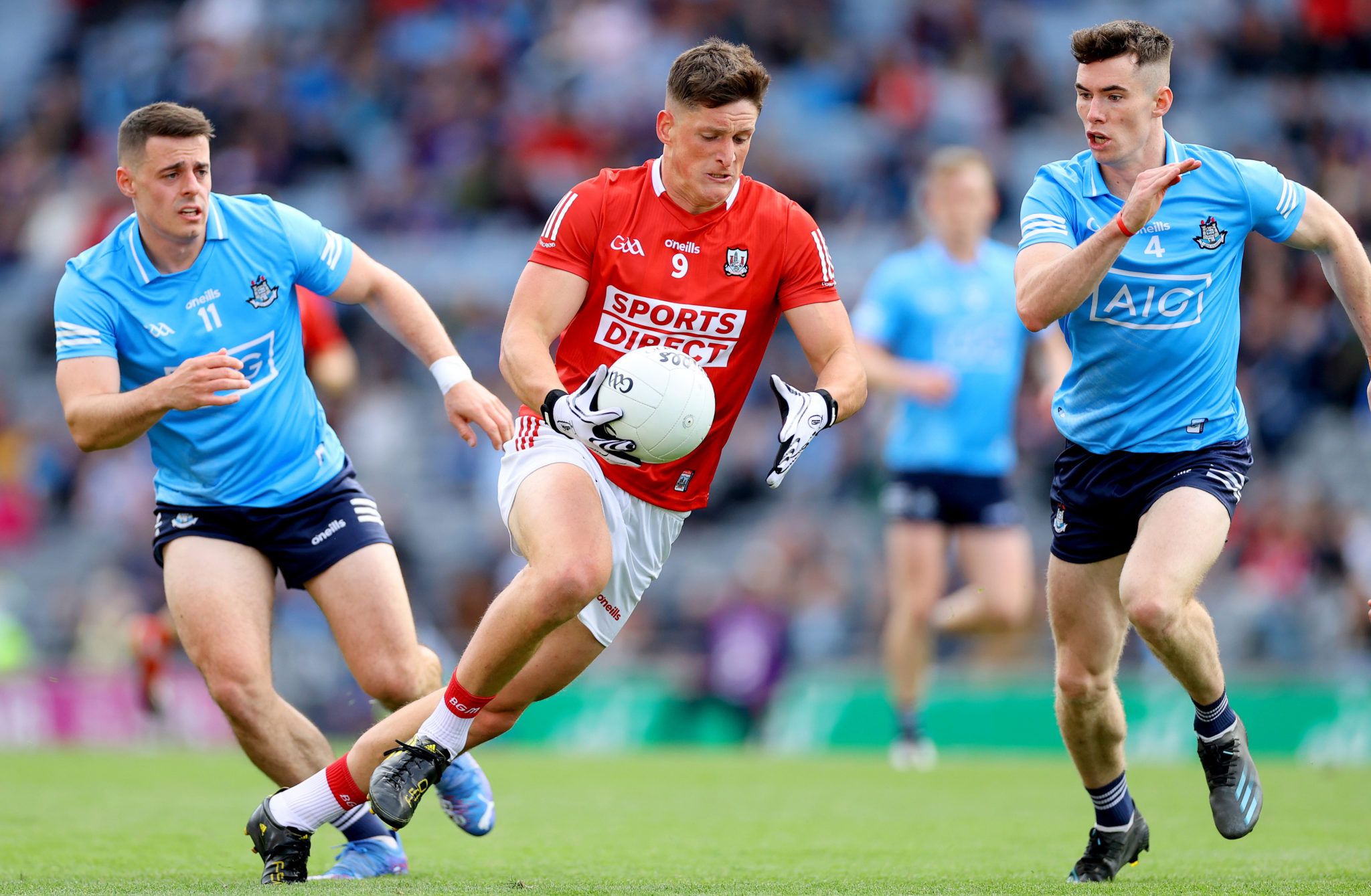 Dublin’s match-ups were interesting, too. They paired Eoin Murchan with the aforementioned Castlehaven man Hurley, which gave Cork an instant height and physicality advantage. Cathail O’Mahony saw this on 18 minutes with a brilliant diagonal ball to Hurley, who made the score 0-4 to 0-3.

Lee Gannon picked up Sherlock and ran him down the pitch at every opportunity, garnering two points for himself over the hour. He also made a great diagonal run across the top of the D while in possession in the third quarter, turned into his man and offloaded to Fenton on the cut to stretch the lead to six.

The interplay between Dublin’s forwards and midfielders was far superior to Cork’s. The ball was always given to the man in the best position, whereas Cork’s inside forwards never linked up, resulting in them being crowded out and dispossessed on a number of occasions.

Cork did score six of their ten points from play and shot 13 wides. They could easily have led at half time with a little more composure in front of goal. But no player outside numbers ten to 15 contributed on the scoreboard. Alternatively, Dublin’s number four, Lee Gannon, as already mentioned, kicked 0-2. Fenton scored 0-2 and his midfield partner Tom Lahiff got 0-1. All of the top teams now get contributions to the scoreboard from all areas of the pitch. In Kerry’s recent quarter-final win against Mayo, Kerry cornerback Tom O’Sullivan kicked 0-3 even though he was marking Cillian O’Connor.

The Rebels needed to come out after half time with all guns blazing. They were just three points behind. But that was as good as it got. Did Dublin turn up the heat or did Cork’s intensity just drop for some reason? It was interesting to see the drop-off coming at more or less the same time as it did against Kerry. Again, it underlines the fact that this group has a long way to go in terms of fitness and conditioning in order to go toe to toe for the hour with the top brass. Dean Rock didn’t contribute much to the game from play but he showed his value as a top-class free-taker, ending the game with 0-8. He has yet to miss a free in this year's championship; that is an unusual statistic.

So we could assess this game on the final score (0-21 to 0-10) or we could assess it in terms of overall progress this season? Cork were well set up defensively. Dublin had no clear-cut goal chance. Cork’s kickout was better. They got better and quicker ball into the inside line, particularly in the first half. The upcoming off-season will be huge for this group in terms of closing the gap to the Division 1 sides.

Dublin started without talisman James McCarthy and Con O’Callaghan. Their return will be key prior to their mouth-watering encounter with the Kingdom in the All-Ireland semi-final. The Dubs never got beyond fourth gear against the Rebels. They have pockets full of All-Ireland medals so the question will be have they got the hunger to match a ravenous Kerry outfit. I forecast a Dublin v Derry All-Ireland final.