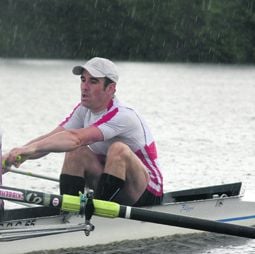 Highlight of your sporting career? Winning gold at the Henley Royal Regatta in the men’s fours’ boat in 2003. This win marked the first time an Irish crew won this event for over 130 years and to have done it in the Skibbereen Rowing Club colours made it all the sweeter.

Most dialled number on your phone? My wife, Christine – telling her I’m late home from training, again!

What’s your karaoke song? Itsy Bitsy Spider at the moment. But it used to be Dear Old Skibbereen.

Tell us an interesting fact about yourself? Growing up, I had a room full of prizes which I won from entering RTÉ art competitions.

If you won the lotto what would you buy first? I’d try to replicate Tig na nGael (Brendan’s sweetshop) in North Street, Skibbereen. I have great childhood memories of working there and eating the sweets (though, of course, not at the same time!)

Separated at birth, who’s your celebrity twin double? While on holidays two years ago, I was told I looked like some famous Irish guy by an American tourist. I was hoping for Colin Farrell or similar, but to my disappointment it was Gerry Adams! Perhaps, it was the beard I was sporting at the time…

If you could change any part of you what would it be? I would like to be taller – you can never be tall enough for rowing.

Your most treasured item of clothing? My Borat mankini or the Skibb one piece I wore when we won Henley.

If I was an animal then I would be a ... tortoise, so I could work from home! I’d also have a good prospect of living a long time!

What question would you liked to have been asked in this interview? If your knees were to the back of your legs could you cycle backwards?