Innishannon's Lauren McCourt in action for the Irish women’s 4x400m relay team at the 2021 European Athletics U20 Championships.

THERE IS a reason why Lauren McCourt’s family WhatsApp group is titled The Fittest Family – because this family of six from Innishannon is fitter than your average household.

Her mother Susan plays hockey. Her father Morgan trains for triathlons. Her siblings are active too – Callum is making moves in the hockey world, Maia juggles both hockey and athletics, and Harry is rugby-mad.

‘There was a rule in our house when we were younger that everyone has to do a sport – and here we are,’ explains Lauren, who is making a name for herself on the track with Bandon AC.

The 19-year-old sprinter is part of a wave of talented young West Cork athletes who took 2021 by storm, and who are also intent on stepping up the pace in the next 12 months.

Lauren doesn't need to look too far for inspiration. Her story is similar to that of her club-mate and Ireland’s fastest woman, Ballineen Bullet Phil Healy. Both are from West Cork, both compete in similar sprint events and both didn’t hit their stride until their late teens.

(It’s worth noting here that at the South Munster Schools Track and Field Championships last summer, Lauren, running for Bandon Grammar School, took gold in the 200m with a record-breaking 24.28 to smash Phil Healy’s record time of 24.61 set in 2013).

‘To see how Phil has come from West Cork to run on the biggest stage in the world, it’s incredible when you look at what she is achieving,’ Lauren says.

‘Seeing what Phil is doing, and seeing the steps she took to get there shows that it’s not impossible, and that is inspiring. Even Phil's story, and how she has gone to the top ... she didn’t win medals until she was 17-, 18-years-old, and it was the same for me; I never won anything when I was younger and I was even thinking of quitting athletics altogether. A lot of people around 13 or 14 can drop out of sport, but I kept at it, and hopefully the best days are ahead of me.’

It took Lauren time to find her event. As a kid, she remembers crying the whole way around a cross-country course; she hated it that much. She dabbled in events like the javelin and shot put, but they just didn't suit her. Then she ran her first 200m race, late Bandon AC coach Catherine Duggan saw Lauren’s potential, and it all changed.

‘Catherine told me she knew I was built for the 200 all along. That just really stuck with me and I said I would give this a go. It was so encouraging that someone saw some potential in me, that they thought I could do well, and it went from there,’ she says.

Lauren is getting faster with each passing year, and in 2021 she reached new heights. One of her highlights includes one of Phil Healy’s too. Lauren had a front-row seat to watch masterful Healy at her best in the women’s 200m final at the 2021 Irish Life Health National Track Field Championships in Santry in June. To get there, in her semi-final the young Bandon AC sprinter set a personal best of 24.16, which also qualified her for the European U20 Championships in Estonia the following month.

‘That was a big moment for me, setting a new PB and getting the qualifying time for the European Juniors,’ she says.

‘It’s what I was working for so to get it was brilliant. At the start of the season my coach and myself set out our goals for the year and our mission was to be one of the athletes on the 4x100m or 4x400m relay teams at the European Juniors, so to qualify in an individual event too was brilliant.’ 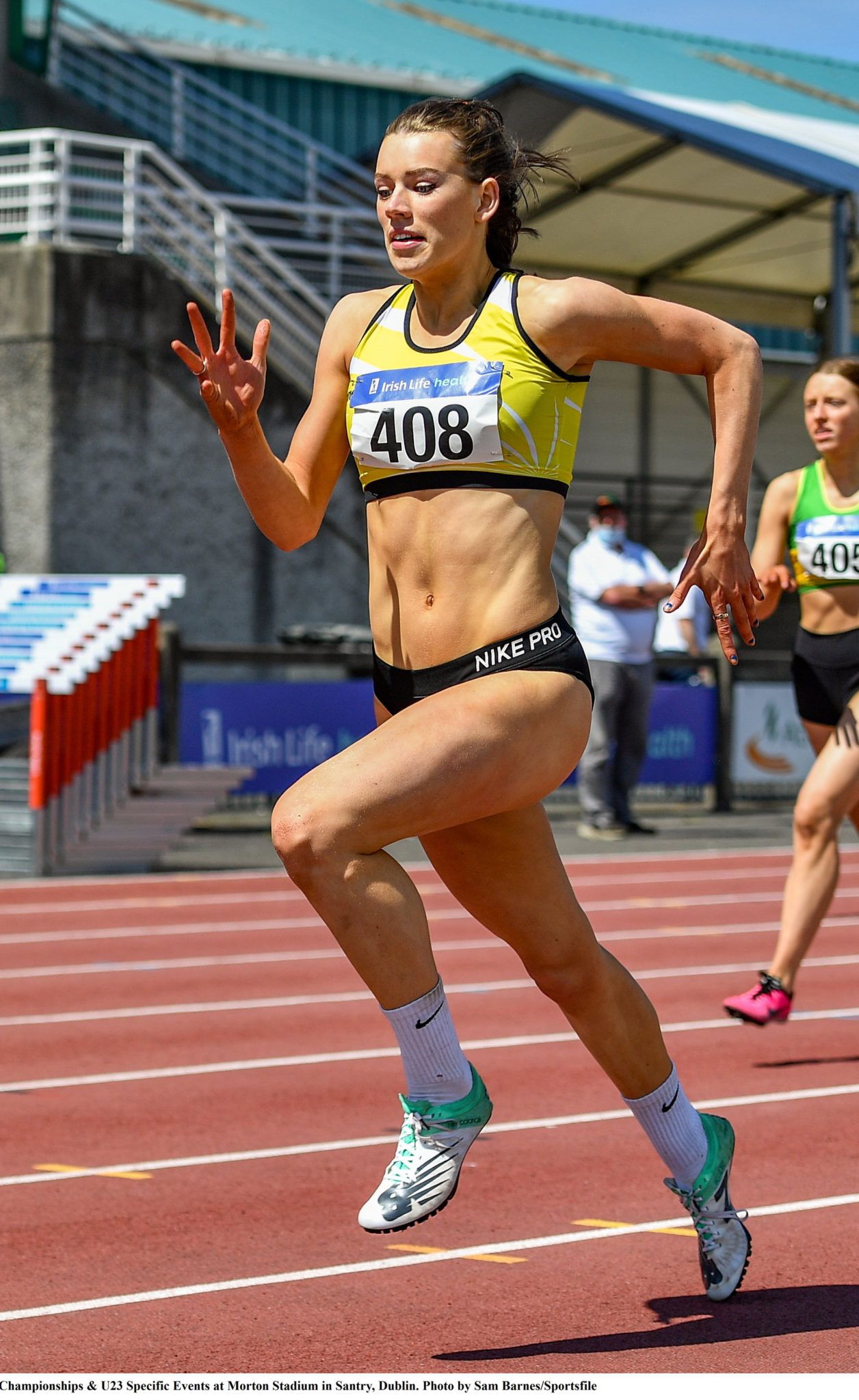 Another upside of her 24.16 in her women’s 200m semi-final was a place in the final: the showdown between Phil Healy and her closest rival Rhasidat Adeleke (Tallaght AC), who had just broken Healy’s 200m national record.

‘The whole talk that day was about that race and what the outcome would be. You could feel the tension before it,’ Lauren recalls.

‘Everyone was in the zone. So was I because I knew it would be a quick race. If you are running against people who are faster than you, it can push you on to faster times. I was hoping to get a PB, and I did break the 24 seconds (23.91 with a +2.1 wind) but unfortunately the wind was over the legal limit so it’s not an official time.

‘It was just great to be part of what was the fastest Irish women’s 200m race in history.’

Lauren finished sixth in that senior final, to follow on from her gold in the women’s 200m at the junior national championships, and a string of strong performances. Next stop: the European U20 Championships where Lauren raced individually in the 200m and with the Irish 4x400m relay team.

‘That was one of the highlights of my career,’ she smiles.

‘The atmosphere when we arrived in Tallinn was unforgettable because everyone was buzzing. It’s a great feeling to know that you’re surrounded by top-class athletes and that you are one of them. I wasn't there to watch the race, I was there to compete. Not only was the competition standard incredibly high but it also meant that it was a really great racing experience.’

In her 200m heat, Lauren, only 18-years-old then, turned up with a superb run of 24.23, just outside her new PB, but she missed out on a place in the next round by just two places. The Irish 4x400m relay team, including Doheny AC’s Maeve O'Neill, raced all the way to the final where they finished fifth in a new U20 national record. Fast times and great memories.

‘After I left Estonia, I knew I’d love to be part of an experience like that again. It’s motivating me to train harder, work harder, push harder and do everything because I realise I am capable of this. I know I can be on the big stage again. It’s definitely something I want to do again,’ the first-year UCC student states.

Already putting the blocks in place for 2022, the plan is to focus on the 400 metres; that’s her big goal. She is determined to show what she is capable of. And she’s prepared to work harder than ever, as she steps up in distance, from 200 to 400. Longer pieces in training, improving her speed endurance, pushing herself through the pain barrier, dealing with lactic build up, it’s all part of her new job spec, but she’ll take it in her stride, like the McCourts too. They’re The Fittest Family, afterall.