A FEW days in November brought out the best in Kinsale golfer John Murphy, as he earned a DP World Tour card for 2023.

Having played on the Challenge Tour in his first full year as a professional, Murphy showed that he was able to learn from and build on his experience. A final round of 65 in qualifying school in Spain gave him a top-25 place, enough to gain a full tour card.

‘When I was growing up, I’d be outside, hitting a plastic ball around my garden, dreaming that I was playing on the European Tour, as it was back then. It’s mad to think that I’ve got to where I've dreamt of playing my whole life.

‘Here’s hoping that it only gets better.’

Having finished in the top 45 in the Challenge Tour’s order of merit for 2022, Murphy was able to enter the final stage of Q-school, though that still meant six gruelling rounds alongside other hopefuls.

After five of them, he was in a tie for 39th – still in the mix but with work to do.

‘It was a nice position in one sense,’ Murphy says, ‘because if you were on the cut line, or a shot ahead, you’d be trying to hold on.

‘I went out with the mindset that I had nothing to lose, though the more the round progressed I realised that I probably did have something to lose!

‘Certainly, it was a nervy last few holes. I think the worst was the hour or so after I had finished as I had to wait so long to see if there were people going to leapfrog me.

‘That was the worst bit of it – when I’m on the course, I at least feel that I can control some of it.’

And, while his hopes did take a bruising with a double bogey on the 15th hole of the second-last round, he didn’t let it faze him.

‘I think the double bogey got me my tour card, as crazy as that sounds,’ he says.

‘It was the fifth round and it had been a tough week, so it was already a mental slog.

‘I got to 15 and put two balls in the water but I got up and down from 150 yards. Myself and my caddie agreed that it was probably the best double bogey I’ve ever made and probably will ever make.

‘It kept me in the tournament as that could easily have been a seven or an eight and all of a sudden then I’m out of it. I was surprisingly happy walking off that green!’

After a bogey-free final round, it was a case of waiting to see if he had done enough.

‘My phone was hopping, I had hundreds of texts coming in, but I was trying to stay away from that side of things,’ he says.

‘I just called my mother and a few people I’d be close to, just trying to keep my mind off things for a while.

‘I was actually sitting at the back of the 18th green, watching the groups come in, so I could see exactly what was happening. It was certainly a strange hour or so but it was a huge relief to get it done.’ 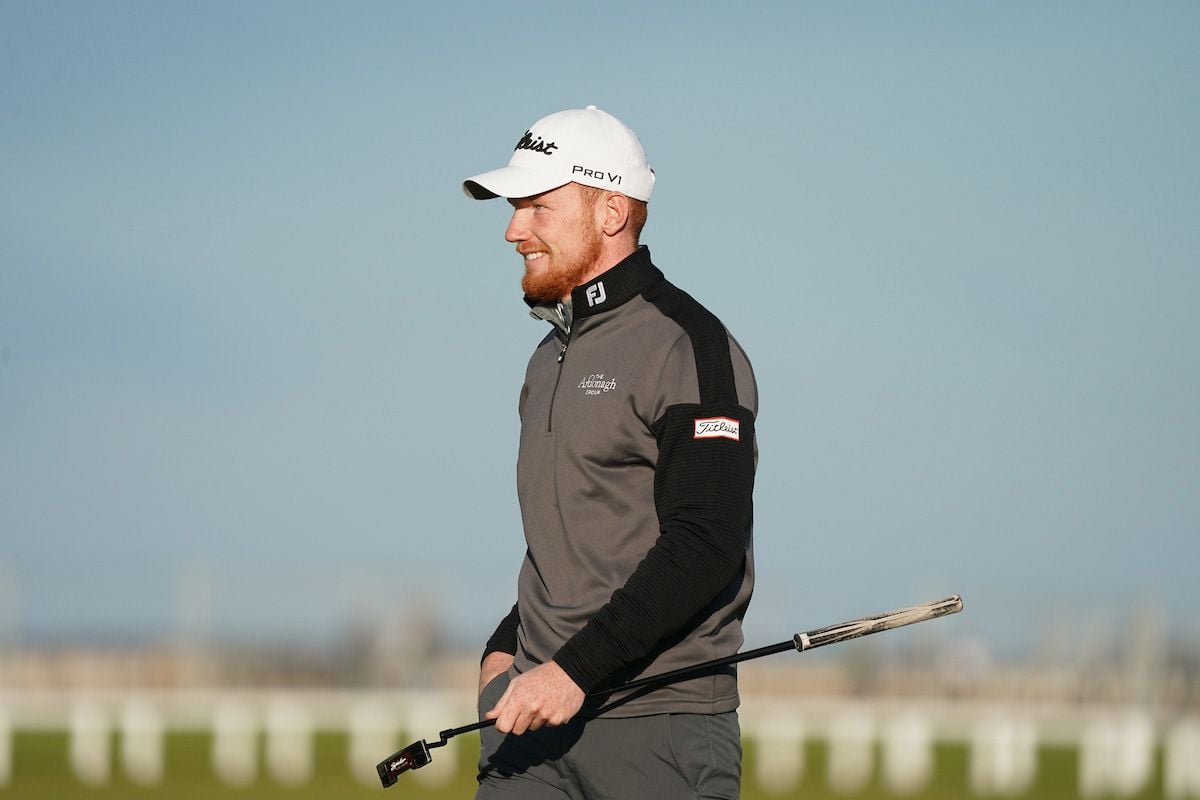 Caddying is his friend and fellow Kinsale native Shane O’Connell, with Murphy grateful for the key role he provides.

‘We grew up next to each other and we’ve been best friends since we were three years old,’ he says.

‘Certainly, it’s nice to be able to share the good moments with him and he’s probably the only person who sees the other side of it.

‘I’m obviously going to post pictures of the nice places we got to and the good results but not many people see the grind in between. There are plenty of bad days in golf, that’s the nature of it, and it’s nice to have a friend with you when they happen.

‘When we have a discussion out on course, we try to come to full agreement. Not many people see the hard work he puts in, walking the course the night before with a flashlight to see the pin positions.

‘I hit 411 shots at qualifying school and if I’d hit 412, I wouldn’t have had my tour card – that extra shot could easily have been down to Shane as he does everything he can to get that extra one percent for me.

On returning home, Murphy and O’Connell were feted by friends and family as well as at Kinsale GC.

‘The support that I’ve received from back home has been incredible,’ Murphy says.

‘Obviously, I’m a proud Corkman and proud Irishman so it’s great to come back and have so much support.

‘It was great to spend time with my family and celebrate, because they’ve made so many sacrifices for the betterment of my golf. Going back to when I was playing boys’ golf, my mum and dad were taking me up and down the country.

‘So much has gone into getting me to where I am – getting the tour card was a great day but that was an accumulation of a lot of hard work, not just by me but those around me.

‘I’m very grateful to have the people around me that I do.’

That support network will be just as important as he looks to continue the upward progress, but for Murphy it will be a case of looking to keep things steady.

‘As cliched as it sounds, I’ve just made a very conscious effort the last few years to make sure that I’m as present as I can,’ he says, ‘trying to show up every day and finding ways to get better.

‘If I can continue to do that, it’ll hopefully leave me in a good place at the end of next year.’