Aaron Mannix (former Dunmanway Town player), Liam Murray (former Skibbereen AFC player) and John O’Donovan (former Ardfield player) came through the West Cork ranks before making their mark with Cork City FC’s Academy. Each player has also been capped by the Republic of Ireland at various levels  but Wednesday, November 17th, 2021 was the evening the West Cork trio helped their League of Ireland club lift some badly-needed silverware. Here, in their own words, Mannix, Murray and John O’Donovan recall that U17 Cup final against Galway United. It was a game played out in front of a 1,200 attendance at Turner’s Cross in which all three West Cork graduates played critical roles.

John O’Donovan: The squad was on a high having just come back from Birmingham and won a tournament trophy but, yeah, there was a bit of pressure on us that night against Galway alright. The senior team’s season was over and we were the last Cork City squad involved in any competition at that stage. It was also the final game of the season at Turner’s Cross which attracted a lot more supporters to come along and watch us.

Liam Murray: Walking out onto the pitch in front of such a big crowd and then hearing the national anthem made the match a bigger deal than usual alright. Our manager, Dave Moore, said all the right things in the dressing room and always gets you into the right frame of mind for a game with those huddles. I remember glancing over to (Aaron) Mannix and thinking we looked a lot more up for it than Galway just before we kicked off.

Aaron Mannix: I just remember us roaring in the tunnel before we went out onto the pitch. That might have been a bit intimidating for Galway.

John O’Donovan: Dave Moore pulled us into a huddle inside the dressing room and talked about the number of people that had come to Turner’s Cross to watch us. Everything he said beforehand were things to make us feel good and get us hyped up before we went out on the pitch. Dave got it right in that he kept us from getting too excited but got his points across. The nerves were there but there was a lot of excitement, too. 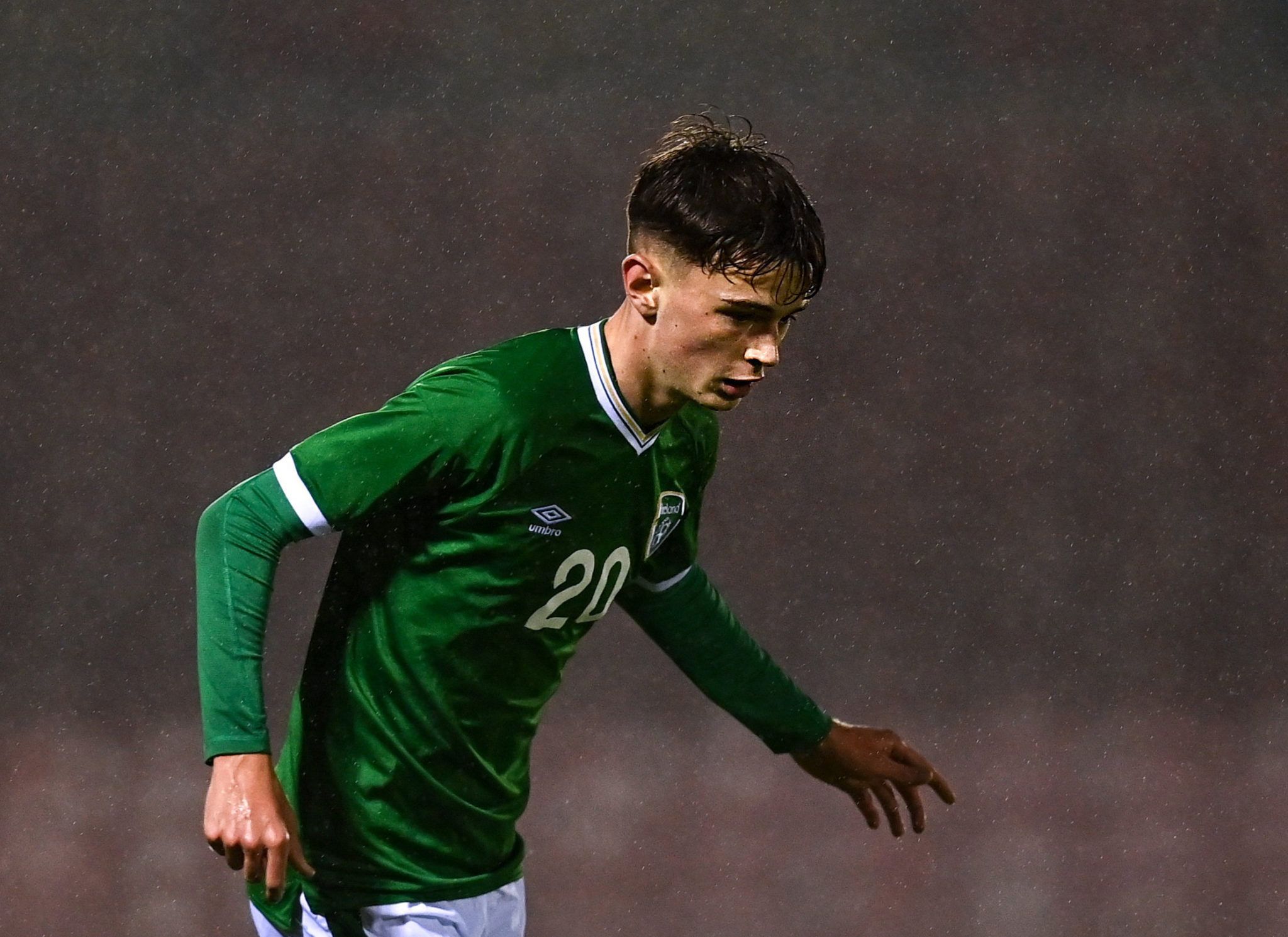 Caheragh's Liam Murray, in action for the Republic of Ireland during the UEFA U17 Championship qualifiers in October, scored for Cork City in their U17 Cup final triumph.

A scoreless first half saw City’s Franco Umeh waste a glorious chance of opening the scoring. David Tarmey did likewise at the opposite end but goalkeeper and man-of-the-match Mannix was equal to all Galway’s first-half efforts and ensured the final remained scoreless at the break.

John O’Donovan: It was 0-0 at half-time but there was no panic as we knew if we got it out wide that we would begin to break them down. Dave Moore told us to keep doing what we were doing and the chances would come. So we looked to do that every time we got the ball to Franco (Umeh). The second I got possession, I passed it straight on to him as he was causing wreck down his wing. We eventually broke them down and got two well-taken goals with Liam getting the second.

Mannix continued to perform heroically and made a string of superb stops. Cork City soaked up the pressure and Franco Umeh put them ahead after 70 minutes. Liam Murray doubled Cork’s lead with six minutes to go and, although they conceded a late goal, it was a mere consolation as City won the cup final 2-1.

Liam Murray: I had big boots to fill with Mark O’Mahony (Cork City striker) out injured. It was tough as I was up front on my own for most of the cup final until I managed to break away and score near the end. I was fairly wrecked from all the running at that point, to be honest. It was a case of hitting and hoping when I broke clear. I thought it was going to go wide or their goalkeeper would stop it. When the ball hit the net? I was delighted.

Aaron Mannix: I didn’t get nervous at all after they scored. That’s because everything just seemed to click for us on the night. Even after they scored the Galway lads didn’t look like they were going to get an equaliser. They had left it too late.

Liam Murray: I was just absolutely delighted at the final whistle. There was an unreal buzz in the dressing room afterwards, it was relief more than anything. The lads deserved it after all the hard work we had put in throughout the year. Dave, our manager, and the coaches too, as they put in a serious amount of work behind the scenes as well.

Aaron Mannix: It was one of my best nights in a Cork City jersey. We all showed up that night. We won and that was the main thing. I had to make a good few saves on the night and, yeah, I was busy.’

John O’Donovan: It was an unreal feeling with the amount of people there. There was a fantastic buzz celebrating with all the lads after we won it. It was one of the few cups Cork City won (in 2021). Not seeing a Dublin team win it was huge too as they usually dominate the cups at this level.

Aaron Mannix: It was nice to win a cup final with your family watching. As the game went on, I didn’t hear anyone because I was concentrating so much. Early on, the Galway supporters were roaring at me anytime I took a kick out. Second half, I couldn’t hear them, I was that focused on the game.

John O’Donovan: ‘It was a relief to win the cup because we were missing a few important players and the game could have gone either way. Playing Galway in Turner’s Cross suited us as it would have been far more difficult for us to go up there. Having a home crowd was a big advantage.

Liam Murray: Obviously, it was a tough year for the Cork City senior team but a good few of the Academy sides got to cup finals and did well in their leagues. It was nice for us to bring back a U17 Cup to Cork especially as it was a final not involving any Dublin teams. That was a bit different and Cork and Galway were two good teams which made for a good final. It was our most complete performance of the year, definitely.