Three Kerrymen, Pat Cahill, the late Pat Griffin and Kevin Dillon, have all played important roles in the success of Clonakilty GAA Club.

TOM LYONS, himself a ‘blow-in’ to Clonakilty, explains the importance that blow-ins have had on the fortunes of Clon’s successful GAA teams for over 100 years

IT is doubtful if a Clonakilty football team has ever won a county title without a ‘blow-in’ on the team.

Nine county senior football titles, two intermediate and a junior have been garnered and in each and every one, players from outside the parish have played prominent parts.

It is something Clon people are very proud of because Clonakilty has always seen itself as a welcoming club, open to everybody living in the community, or with connections to the community. In fact, some of the blow-ins have become heroes in the parish and are held in great regard by the native Clon people.

What exactly is a blow-in, you ask? When somebody arrives in the parish from somewhere else, that person is classified as a blow-in and the farther away you come from, the more of a blow-in you are. The real question is: how long do you remain a blow-in before you become a native? That’s a difficult one to answer because the blow-in himself, or herself, always remains a blow-in and some would hold that it is only the third generation of his/her family that will be known as natives.

While some use it in a derogatory way, in Clonakilty GAA it has always been used in friendly, admirable fashion, mainly because of the part blow-ins have played in the proud history of the club. The present senior team that will contest a Premier SFC semi-final this Sunday afternoon – against Douglas in Páirc Uí Chaoimh – is no exception.

When Clonakilty won their first county title in 1913, the team contained a number of Rosscarbery men. When the junior and intermediate titles were won in 1930/31, a number of outsiders were included. The major importees, who were to give years of service to the club, were Sean Griffin, a teacher in Ardfield who hailed from Kerry, and Dan Burke of Union Hall, whose late son Padraig was a dedicated Castlehaven player and mentor.

The 1930s saw six senior finals being lost in seven years with a number of blow-ins involved. Foremost were the Finns from Barryroe, John Joe and Mick, who was to eventually become more of a Clonakilty man than any native. Other blow-ins to feature in those heart-breaking years were the flying Jack Finnegan, Jim Curran of Kilkenny, Donal Hayes of Union Hall, Tim McCarthy of Barryroe, Paddy Whitty of Kerry,

When Clon finally won their first senior title in 1939, at the seventh attempt, the team was captained by another teacher, ‘Pakie’ Nyhan, a native of Ballinacarriga. Also involved was Tom O’Reilly, a UCC student, later to rear his family as a teacher in Dunmanway. 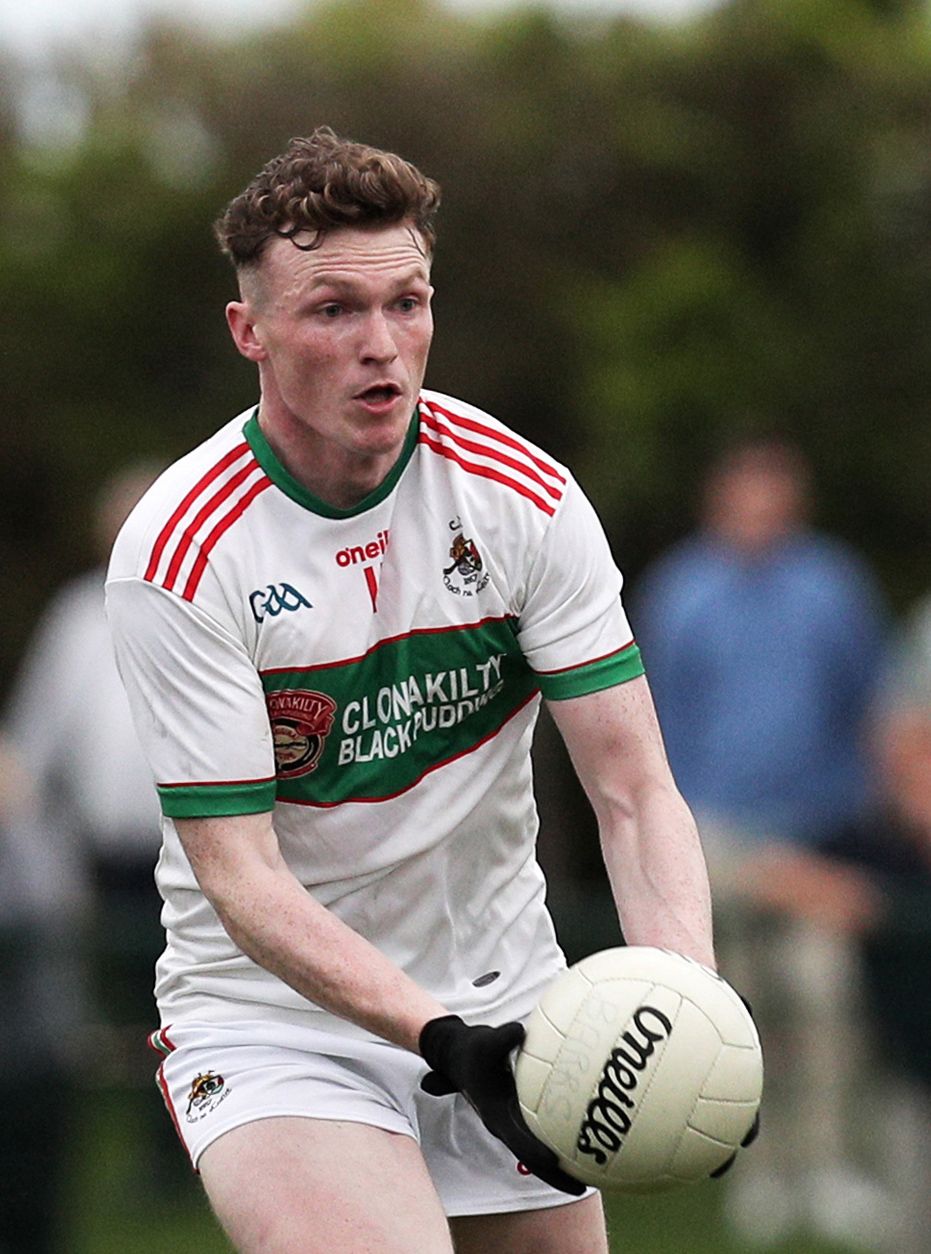 Kerryman Dara Ó Sé has proved to be a valuable addition to the Clon senior football team.

The 1940s was the club’s golden era, winning five senior titles, two South West junior titles and six South West junior hurling titles. Those legendary teams invariably included many blow-ins. Top of the list was the All-Ireland winning midfielder Fachtna O’Donovan who arrived from Rosscarbery, while Mick Finn, who captained the winning senior team in 1947, had a Barryroe team-mate Jack Cahalane, who won the hearts of all Clon people and remains a legend in the club. Other blow-in heroes of that golden era included ‘Togher’ Casey of Macroom, Paddy ‘Hitler’ Healy of Ballincollig and Cork hurling fame, Liam Grainger of Dohenys, Derry Burke of Milltown in Kerry, Donal Rice of Kenmare, whose grandson now plays on the Doheny team.

1952 saw the end of the golden era, the title being won after the team drew every round, bar one, including the final. Captain of the team was the great Kerry man Tom Moriarty, who won medals with both Kerry and Cork. He was an outstanding midfielder whose career was cut short in 1958 by a badly-broken leg. Also on the 1952 side was a young Bantry lad named Jimmy O’Donovan, who went on to play for Cork, and Tipperary hurler Mick Ryan.

In 1961, Clon lost the county final by two points, having missed two penalties and included were two Leap men, Michael Crowley and Teddy O’Leary. In 1968 when Clon again lost the final, in a replay to Carbery, the side was captained by Kevin Dillon from Duagh in Kerry, whose sons won county medals with the club in 1996. Ardfield’s Paddy O’Sullivan was to give great years of service in the 1960s.

Undoubtedly, one of the greatest blow-ins never to play in a county final with Clon but who gave amazing service in the 1970s was the legendary Kerry star Pat Griffin. He also had the satisfaction of watching his son Padraig winning the county in 1996. Griffin, Dillon and captain, Gabriel Quirke, Kerrymen all, led the junior team to the South West football title in 1977, and the amiable Pat Cahill, another Kerry import, was a selector. His son also won a county medal in 1996.

Clon always had a great affinity with Kerry and, although never appearing in county finals, Kerry players like Pat Moriarty and Jim Murphy gave great service to the club.

Clonakilty lost the county finals of 1983 and 1985 and welcome blow-ins on those teams included John O’Brien, later to become chairman of the club, John Collins, Dan Walsh and the Scally’s Eugene, Tom and Aidan.

1996 saw Clon finally winning their eighth county title, after a wait of 44 years and as pointed out already, the sons of many great blow-ins featured on the team but two real stars of that side were Tom Mannix, a native of Doneraile and Paddy Barrett, a Limerick man who played football for Ireland. They truly kept up the tradition of blow-ins playing major parts in Clon’s title wins.

The Clonakilty team that lost the 2003 county final to Castlehaven was probably the only Clon team in a final to have 15 natives on the pitch.

Move on to Clon’s latest victory in the county in 2009 and leading the way was the outstanding centre back from Clare, Noel Griffin, while up front, Mayo lad Conor McManus, man-of-the-match in that final against St Finbarr’s, was a real find. Tagging along, too, was the lively Martin ‘Nazzer’ O’Brien of Mallow. Without their contributions who knows what might have happened.

Move forward now to 2021. With the stepping down of players like the Anglin brothers, Timmy and Tony, and Sean Nagle in recent times, Clon lost three of their biggest players, and the team struggled in the physical stakes. Not for the first time, the Gardaí came to the rescue; many of Clon’s great blow-ins having been members of the Gardaí Síochána.

Not only were they Gardaí but also Kerrymen, a superb combination as far as Clonakilty were concerned. In Garda Dara Ó Sé of An Ghaeltacht, and Garda Tom Grimes of Listowel, Clon have unearthed two more Kerry gems. Add in Ben Ridgeway, a former Connacht U20 rugby player with Galwegians and now a farm manager in Clonakilty, and Clon can boast of a real strong backbone to their team. All three are following in the footsteps of some famous Clonakilty GAA blow-ins and are already great favourites with the Clonakilty supporters.