This superb aerial photo from James Tidmarsh captures the idyllic setting of Skibbereen Rowing Club on the bank of the River Ilen.

DOMINIC Casey and Skibbereen Rowing Club have always been ahead of the curve.

Long before Dave Brailsford coined the ‘marginal gains’ philosophy in British Cycling, Casey had implemented a similar process to huge success in this small, country rowing club, tucked away in West Cork.

‘The whole principle came from the idea that if you broke down everything you could think of, that goes into riding a bike, and then improved it by one percent, you will get a significant increase when you put them all together,’ Brailsford explained in 2012, but back in the 1990s Casey had already been finding those marginal gains with Skibbereen rowers. He eked out one percent here, one percent there, and it all contributed to transforming this rowing club into the best in the country.

In the ’90s when Skibbereen rowers went to the Irish Rowing Championships at Inniscarra, they kept to themselves. They set up base camp at the old, rusted UCC boathouse in the woods, well away from all the other competing clubs. There were no distractions here. No temptations. They were here to row. And win. It was all about the small details, too. Those marginal gains.

‘Dominic kept us hydrated, he bought us all hats to keep the sun off our heads, all those little bits – and that set us apart,’ Skibb’s first Olympian, Eugene Coakley, explains.

‘Looking back now, sport scientists and psychologists will probably put a name to what he did, but go back 20 years ago and when Dominic kept us hydrated he didn’t say it as a sports scientist, he said it as a good thing to do.

‘You talk about sports psychology and talent ID, Dominic was doing that 25 years ago. Now we have a name for it. Now, clubs love to say they are high-performance clubs but Dominic set up a high-performance centre in Skibbereen before that term was ever used.’

The results speak for themselves as this humble club, founded in 1970 by a butcher, a fisherman and a carpenter (hat-tip here to Richard Hosford, Danny Murphy and Donie Fitzgerald), grew to become the most successful rowing club in Ireland. This working-class, country club passed out the established and elite powers like Neptune Rowing Club (founded in 1908) and Commercial Rowing Club (founded in 1856).

In Christmas 2016, months after the O’Donovan brothers brought those Olympic silver medals home to Skibb, one of the club’s senior rowers, Kenneth McCarthy and his wife Christine took their kids to see Santa Claus in Blarney. Santa asked where they were from. Skibbereen, they replied. Oh yes, Santa said, that’s the town where Gary and Paul are from. Even in the North Pole, they’d heard of Skibbereen Rowing Club.

This rags-to-riches story is built on a foundation of hard work, desire, simplicity and its people. The club’s history is dotted with incredible characters, from the three founding members to Nuala Lupton (the club’s first international oarsperson in 1975) to Donal O’Sullivan (the long-sitting chairman) to Dominic Casey (coach and rowing mastermind) and so many more – too many to mention – who work so hard behind the scenes to create this culture and environment that teaches its rowers to race and to win.

The club’s production line is quite phenomenal. That’s because of the coaches, the training programme, the River Ilen, the community, the tradition, the commitment, the blood, sweat and tears and, mostly, the people, led by Dominic Casey. He’s the man who never stops thinking about rowing. It’s his passion. He’s always looking for those marginal gains, that extra one percent. He regularly points to the importance of the championship board that hangs in the hall of the clubhouse, just inside the front door.

The board, spread wide across the wall, carries the name of every club member who has won a national championship title. It’s a symbol of Skibb’s glorious success on the water.

‘When people do see the board, they might not say it but they want to get their name on it,’ Dominic explained before. They want their name to join that exclusive club of men and women who have won in the club’s singlet. Winning is important to everyone associated with the club. They race to win. They train to win. And it’s that success that breeds more success and that keeps the conveyor belt going. 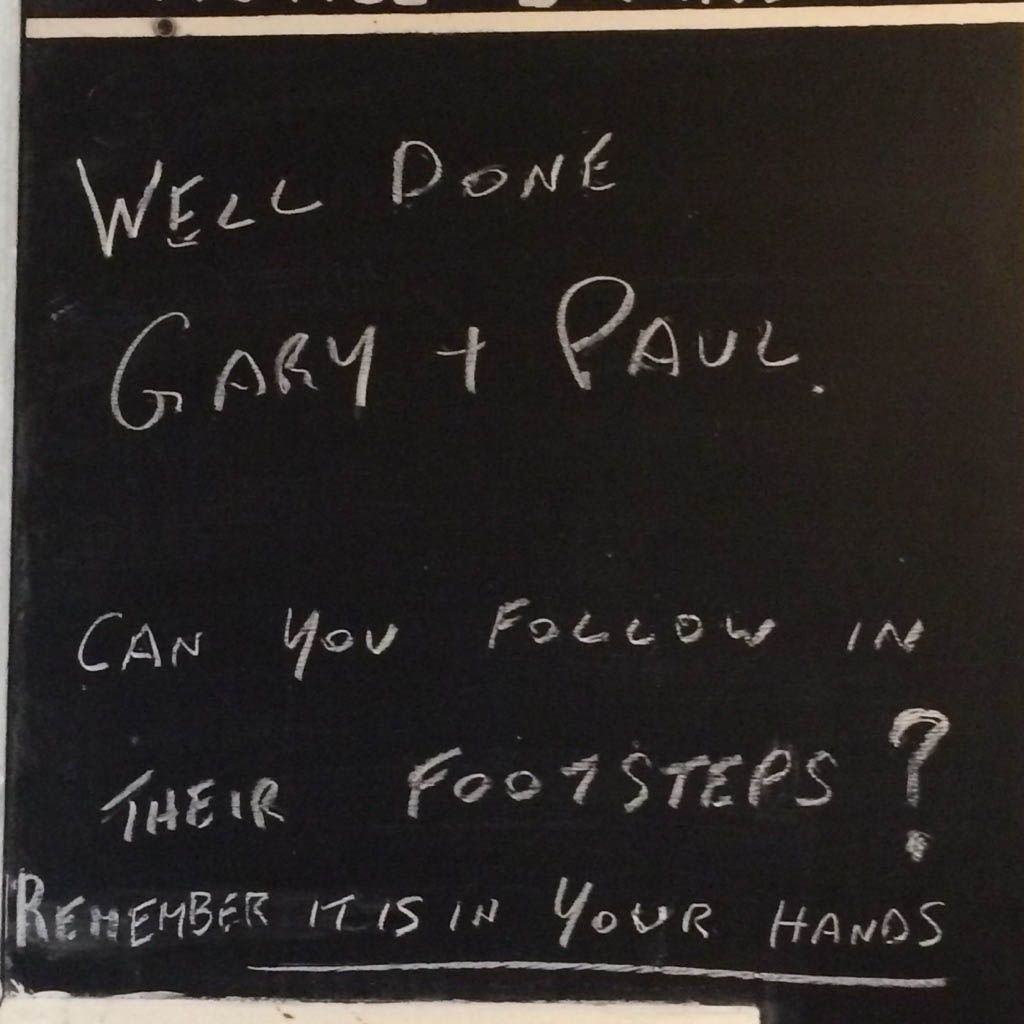 Dominic Casey wrote this motivational message on the board at the clubhouse a few weeks after Gary and Paul O'Donovan won silver at the 2016 Olympic Games.

It’s why too, in the weeks after the O’Donovan brothers’ Olympic silver medal success in Rio, Dominic Casey wrote a message in white chalk on the blackboard hanging in the hall of the clubhouse. It was a message to the club rowers.

Remember it is in your hands

It was Coach Casey’s psychology at work again. A challenge to the rest of the rowers in the club. Again, marginal gains. He was looking for that extra few percent that can make all the difference in a sport where milliseconds count. And so the wheel keeps on turning.