History was made in Rosscarbery last Friday when two West Cork colleges clashed for the first time ever in the final of the Simcox Cup, Cork colleges’ senior A football, a competition that dates back 111 years.

This unique final drew a huge crowd, with busloads of students adding great atmosphere to the occasion. With a number of players on both sides having worn the red shirt of Cork at minor and U20 level, the game was top-class and particularly pleasing was the impressive defending done by both sides without having to resort to blanket defending.

For much of the game, it looked as if the stronger and bigger Skibb side would emerge clear winners but just like Man City in the Champions League recently, they almost crash-landed when the title was safely in the bag.

A vital goal by the dynamic Jack O’Neill in the 16th minute looked like being the crucial score of the game as Skibb built up a lead of six points midway through the second half. With six minutes remaining they were still five to the good and staring at the finishing tape but credit Clonakilty with a courageous comeback that produced two cracking goals in the space of three minutes to level the game amid great excitement.

Skibb refused to panic and in the dying minutes they produced two fine points to win the game. Clon did close the gap to the minimum but ran out of time as Skibbereen took home the impressive Simcox Cup for the first time ever. 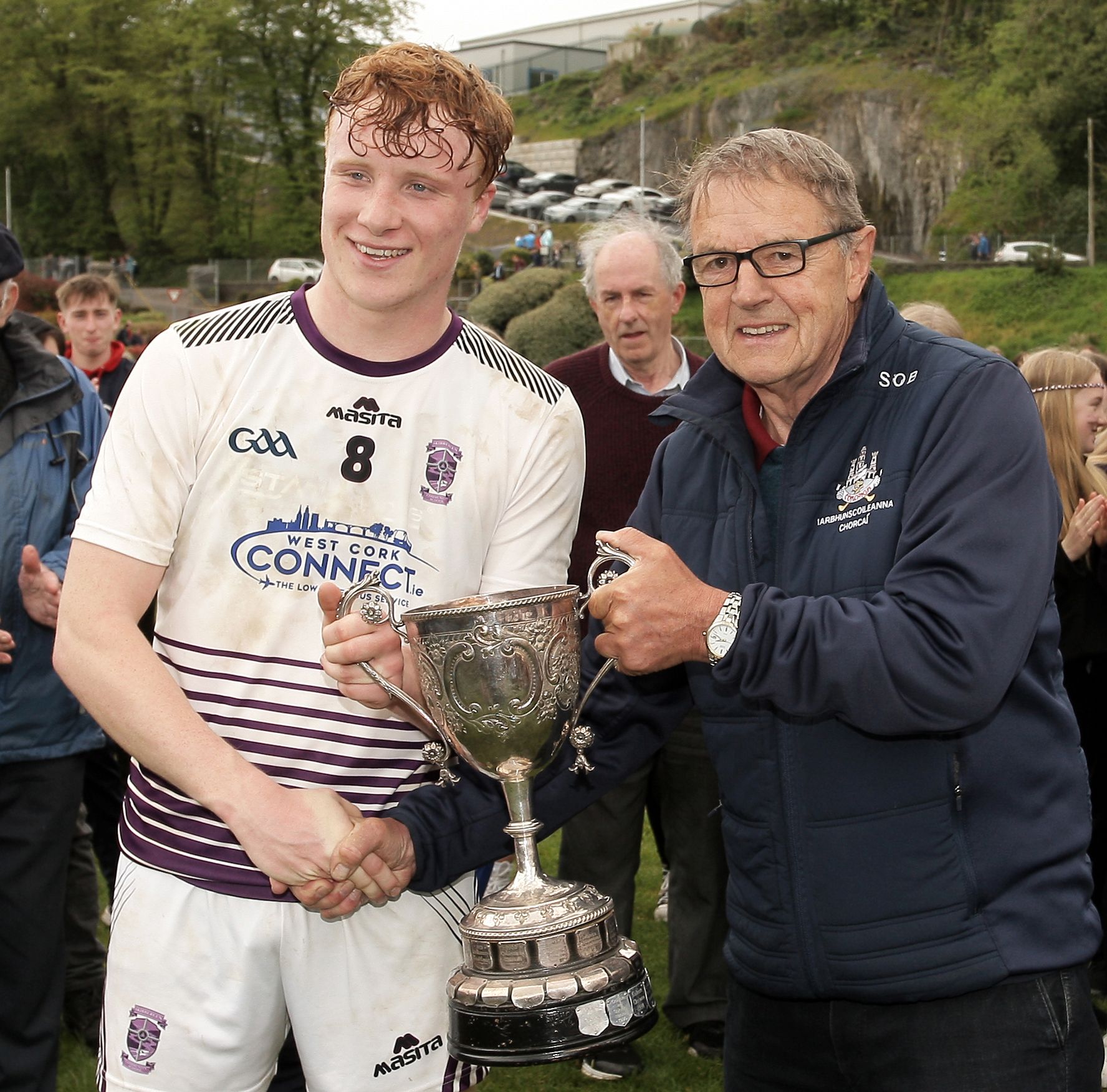 There were outstanding individual performances on both sides with stronger Skibb also combining well as a team. In strong midfielder, Robbie Minihane, and his partner, Seán Browne, they had great ball winners who dominated play, while defenders Shane Carey, Shane O’Connell, Dylan Hourihane, Hugh O’Donovan and Thomas O’Mahony really put the blinkers on a potentially lethal Clon attacking sextet for most of the hour. Up front, Niall Daly, Jamie O’Driscoll and Jack O’Neill really produced the goods when needed.

Clon had a match winner in centre forward Conor Daly, until he tired in the second half, with Darragh Gough, John O’Donovan and Colm O’Brien keeping the best to the last. Midfielders, Aaron Ryan and Eoin Downey, tried hard at midfield against much stronger opponents and in defence, Dan Twomey, Seán O’Riordan, James O’Brien and Chris Kenneally gave their all under a lot of pressure.

‘We have done a lot of work with this squad,’ said enthusiastic mentor David Whelton.  ‘We were disappointed not to go further in the Corn Uí Mhuirí and decided to have a real cut off the Simcox. The lads showed great enthusiasm all year and have improved in leaps and bounds. We looked to be in control midway through the second half but fair play to Clon, they never gave up and those two goals really rocked us.

‘My heart was pounding at that point but we never panicked and the Dalys picked off the winning scores. It was too close for comfort but it was marvellous to see the crowd here and the great atmosphere. Games like this can only improve football in West Cork and winning this is a huge boost to football in our school. This will drive all the young lads to do the same.’ There wasn’t a kick of a ball between the sides in the first quarter as impressive midfielder, Robbie Minihane, kicked a 45 and one from play for Skibb, with Niall Daly and Jack O’Neill adding two more. Clon responded with three points from the rampant Conor Daly, a 45 and two from play, with Darragh Gough blazing a great goal chance over the crossbar. It was 0-4 each at the end of the first quarter.

The decisive goal came in the 16th minute when the flying Jack O’Neill cut right through the centre to bury the ball in the Clon net and when Fiachra Collins added a point, Skibb were four clear. Two points from Niall Daly, sandwiching a Conor Daly white flag, had Skibb five to the good at half time, 1-7 to 0-5. They were unlucky for goals twice in a minute when Clon goalkeeper, Tadhg O’Neill, saved well from the flying Jamie O’Driscoll and Jack O’Neill drove the rebound off the crossbar.

It was score for score again in the third quarter with Minihane, free, and Niall Daly swapping points with an improving Darragh Gough and Colm O’Brien. Both centre forwards, Daly and O’Neill, blazed shots just wide and when a Gough point was answered by Niall Daly and Jamie O’Driscoll, Skibb were six to the good at the end of the third quarter, 1-11 to 0-8.

A point from Aaron Ryan closed the gap to five but with only six minutes remaining, the title looked Skibbereen bound. But like all good wines, the best was kept to the last in this final and when John O’Donovan and Conor Daly set up Darragh Gough for a palmed goal in the 54th minute, the fat was in the fire. Skibb responded well with a point from O’Neill, a vital one as it turned out, but back came Clon and John O’Donovan lashed a bullet to the Skibb net to tie the scores.

The atmosphere was electric as Clon kicked a wide and Niall Daly found the target to give Skibb the lead again with time running out. Sub, Oisín Daly, wrote his name into the history books when he doubled the lead and even though Clon came back with Colm O’Brien point to cut the lead to the minimum, it was too late as the final whistle sounded on the kickout.

There were great scenes of excitement as chairperson of the Cork second level schools, Seán Ó Briain, presented the Simcox Cup to outstanding captain, Robbie Minihane.